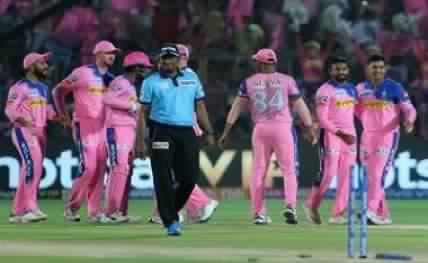 Jaipur:  A good bowling effort followed by some valuable top-order contribution with the bat helped Rajasthan Royals seal a comfortable seven-wicket win over Sunrisers Hyderabad in an Indian Premier League (IPL) tie at the Sawai Mansingh Stadium, here on Saturday.

Ajinkya Rahane (39), Liam Livingstone (44 off 26) and Sanju Samson (48 unbeaten off 32) contributed effectively while Steven Smith also chipped in with 22 runs to help their side cross the line with five balls to spare.

Chasing a modest 161-run target, Rajasthan openers — Rahane and Livingstone — took their side to a great start as they added 40 runs in the first five overs before their valiant effort saw their team touching the 50-run mark in the next four deliveirs.

With everything going in the Rajasthan way, Rashid brought some respite for his side as his leg-break turning away from off to take an inside edge of Livingstone which was smartly picked by stumper Wriddhiman Saha, leaving Hyderabad at 78/1 in 9.1 overs.

Rahane also departed soon as Shakib packed back him in the 12th over, reducing the home side to 93/2.

However, Samson and skipper Smith denied the visitors making any further inroads into the Rajasthan camp, adding a crucial 55 runs for the third wicket to propel their side close to the 150-run mark.

Khaleel sent back Smith in the 17th over. But it was too late by then as the home side was just 13 runs away from tasting victory with seven wickets in hand and 20 balls left.

Samson and Ashton Turner (3 unbeaten off 7) then comfortably performed the last rites to register a victory with ease for their side, helping Rajasthan move a place above in the points table to be at the sixth spot and keep their play-offs hope alive.

Earlier, some disciplined bowling by Rajasthan had helped them restrict Hyderabad at 160/8.

Despite a valiant 75-run stand between opener David Warner (37 off 32) and Manish Pandey (61 off 36), no other Hyderabad batsman could rise to the occasion as Rajasthan bowlers jolted visitors at regular intervals after the duo’s departure.

Put to bat, Hyderabad openers Kane Williamson (13 off 14) and Warner started cautiously adding 27 runs in the initial three overs. Two runs later, Gopal came with the first blow as he clean bowled Williamson in the fourth over.

The Hyderabad skipper’s fall saw Manish joining hands with Warner in the middle and the duo perfectly repaired the early damage, steering their side to 50-run mark in 5.5 overs. Both the batters continued to attack hosts’ bowlers and kept the scoreboard ticking as visitors touched the three-digit mark in 11.3 overs.

Thomas came with a much needed breakthrough in the 13th over as he packed back a good-looking Warner, leaving Hyderabad at 103/2. Warner’s fall saw the visiting team’s middle-order collapse and they lost five wickets with the addition of just 34 runs in quick succession.

After Warner, Manish also departed soon and Vijay Shankar (8), Shakib Al Hasan (9), Deepak Hooda (0) and Wriddhiman Saha (5) failed to click, leaving Hyderabad at 137/7. Unbeaten Rashid Khan chipped in with 17 runs off eight balls down the order, one four and one six, as visitors reached a respectable total.