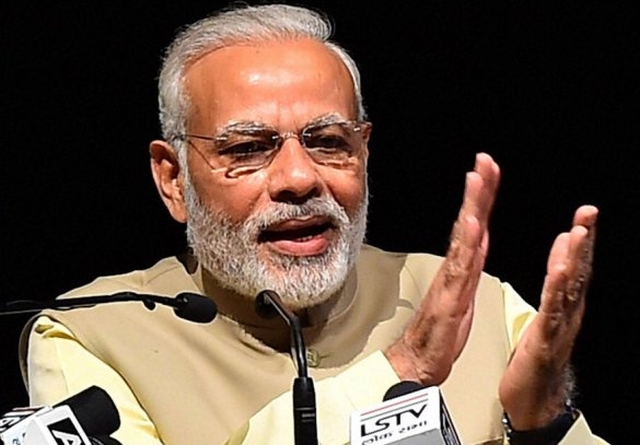 BJP vs coalition in Bulandshahr, Modi a key factor

Bulandshahr (Uttar Pradesh): This Lok Sabha constituency, a BJP bastion which it has claimed for around 25 years, may, if the Modi magic continues, give it another chance amid the twin challenges of the SP-BSP-RLD alliance and the polarisation of a section of the voters.

Many voters that IANS spoke to expressed their displeasure against incumbent MP Bhola Singh but have decided to vote for the party only because of Prime Minister Narendra Modi, whom they described as the perfect prime ministerial candidate among the leaders of the other political parties.

Property dealer Vinod Sharma told IANS that the people will cast their votes in Modi’s name.

The victory margin, he said, may go down to 1.20 lakh from over 4 lakh the last time around, but BJP will win the election. “As the people are angry with the sitting MP, it will impact the result. If there had been any other BJP candidate, the margin of victory would have crossed that of the last election.

“The people will vote in the name of Modi not for the BJP or its candidate. There is anger against the BJP because its leaders have used derogatory remarks on many occasions and it has hurt the sentiments of the people.

“The BJP MP has never visited in the constituency,” Guddu, who runs a tyre repair shop at the entrance of Bulandshahr city, told IANS.

There is a fight between the BJP and the alliance, said Guddu, adding that the Congress is nowhere in the fight.

The BJP has been winning from Bulandshahr since 1991 and lost only once in 2009 to the Samajwadi Party.

Bhola Singh is up against Samajwadi Party-Bahujan Samaj Party-Rashtriya Lok Dal alliance candidate Yogesh Verma, the husband of Meerut mayor Sunita Verma. Bansi Lal Pahadia, who had been elected to the state assembly from Khurja in 2012, is the Congress nominee.

In 2014, Bhola Singh had defeated his nearest rival, Pradeep Kumar Jatav of the BSP, by over 4 lakh votes.

This time around, Modi is the first choice of voters except for the majority of Muslims, and Dalits in the Western Uttar Pradesh constituency which comprises five assembly segments – Bulandshahr, Syana, Anupshahr, Debai and Shikarpur.

But, despite a 70 per cent Hindu population, as per the 2011 census, victory will not be an easy task for the BJP as the polarisation of Dalit, Muslim and Jat votes may pose a tough challenge.

Jats, who account for some 3.2 lakh voters, are divided between the BJP and the RLD and their support for either party can change the scenario. If they majorly favour the alliance, the BJP will be in for a cracker of a contest.

Talking about the Jat votes, Narendra Sharma, who runs deals in electrical goods, said: “There is majority of Jats in Agauta, Saidpur, Bibinagar, Bandaul and Jauli villages. They are angry with the RLD for joining hands with the BSP. They will vote for the BJP.”

A resident of Aguata, Sanjay Sharma, said: “Over 90 per cent people in my are will vote for the flower (the BJP symbol) because of Modi. There is 60 per cent Jats and 20 per cent Branhmins here.”

Asked about the impact of Goods and Services Tax (GST), Devendra Kumar, a businessman from Syana said: “How will the country progress if we do not pay tax? There is a little bit of impact of GST on the business but it will benefit in the long term.”

Muslims, who form a significant 22 per cent of the total population play an important role in Bulandshahr constituency. Thus, if they throw their weight behind the alliance and dump the Congress, this would spell danger for the BJP.

Mohd. Shabir, who deals in electric goods, told IANS: “There is a fight between the BJP and the gathbandhan (alliance) here. Congress has no base in Bulandshahr. There was a mahagathbandhan rally here on Saturday. Over 50 per cent Jats are supporting the alliance which were the BJP supporters earlier. Around 10 per cent Muslims are also supporting the BJP.”

Shabir said that Modi is very good and should be elected again, only his “juniors like (BJP President) Amit Shah and (UP Chief Minister) Yogi Adityanath try to spread hatred”.

Sahendrapal, a farmer of Chingrawathi, from where over 20 people have been held by the police in connection with last year’s violence, said some Lodhi Rajputs are against the BJP in his village but overall consensus is with Modi.A

“Modi government has helped farmers by waiving off interest on Rs 1 lakh loan taken on the Kisan (credit) card.”

He, however, said the alliance is giving a challenge to the BJP.

As for Congress candidate Pahadia, who belongs to the Khatik Scheduled Caste, he can also swing the almost 1 lakh votes of the community and this will directly impact the BJP’s Bhola Singh, who is from the same caste.

Bulandshahr, which has over 17 lakh voters, is reserved for Scheduled Castes. It will go to the polls on April 18. The counting of votes will take place on May 23.

The constituency, a sugarcane belt of Uttar Pradesh, was in the news for the mob violence on December 3 last year that claimed the lives of a police inspector and a youth.