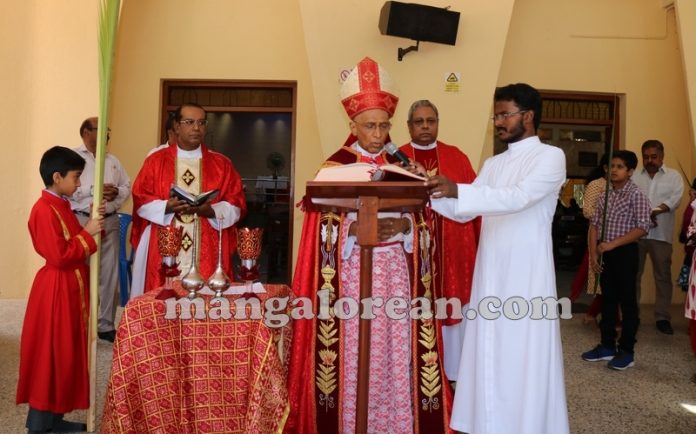 Dr Moras Urges All To Welcome Jesus With Clean Hearts

Bengaluru: Archbishop emeritus Dr Bernard Moras called upon the faithful to prepare themselves to welcome Jesus into their hearts in the way Jesus entered Jerusalem temple gloriously.

Dr Moras was the main celebrant at the Palm Sunday celebrations organized by Bangalore Catholic Charismatic Renewal Services (BCCRS) here (in Bangalore) on Sunday, April 14. The curtain came down on the 40-day Lenten observance with intercession, Holy Eucharist in at least five languages, praise & worship, preaching and various other devotional pious practices.

Dr Morais in the homily spoke of the relevance of Palm Sunday including the triumphant entry of Jesus into Jerusalem, the Passion, crucifixion and resurrection.

Palm Sunday is a commemoration of Jesus’ triumphal entry into Jerusalem, coming in peace and riding on a donkey. Jesus’ entry into Jerusalem coincided with the Jewish festival of Passover. He was met by crowds of followers and supporters who lined the road into the city and waved branches cut from palm trees. They laid palm fronds on the road and even laid down cloaks for Jesus to ride over. This entry into Jerusalem fulfilled the Old Testament prophecies promising that God’s Messiah would enter the holy city and go to the temple.

Dr Bernard Moras said the hardest of sinners come to the feet of Jesus. Everyone has sinned. All should have the awareness and realization that ‘we are all sinners’. Jesus washed away everyone’s sins. All carried palms and entered the church. Jesus also entered the Jerusalem temple. Jesus may enter the temple at an unexpected time and one might miss him if not present and prepared to meet him. Jesus gloriously entered the temple and ‘are we ready to welcome Jesus?’ Dr Morais put forth for reflection that 40 days of lent and participation in the celebrations could make Jesus visit the church, families and society. Are we going to shout Hosanna with a sincere heart or are we going to say ‘crucify him? Are we going to be carried away with what comes our way in fulfilling our wishes and desires?

In the year 300, Emperor Constantine granted freedom to Church. He was a good man but not a believer. Though he persecuted the followers of Christ, he issued a decree in which people were asked to choose between their job and Christ. The majority chose their job against Christ. Only one percent gave up the job. The emperor had a soft corner. He pointed out to the majority saying that if they were not faithful to their God, what guarantee they would give to be faithful to the emperor. This incident should help all to be faithful to God and strive towards building the Church. We should learn from the people of that time who said, “We have only Caesar and nobody else”.

Palm Sunday church services typically start with a procession of people carrying branches and palms. The palm branch is a symbol of victory, triumph, peace, and eternal life originating in the ancient Near East and the Mediterranean world. The palm was sacred in Mesopotamian religions and in ancient Egypt represented immortality. A palm branch was awarded to victorious athletes in ancient Greece and a palm frond or the tree itself is one of the most common attributes of Victory personified in ancient Rome.

Palm Sunday is His last journey into the city before His death. Jesus rode into Jerusalem on a donkey. This choice of travel is very symbolic as Jesus wanted to show all the people that He came in peace. History shows that when a king rode into a city on a horse, he was entering for war. If a king came into a city on a donkey, he was coming in peace.

Many people who heard Jesus was arriving in Jerusalem came forward to greet Him. In the Gospel of St. John 12:13, it is written that a great multitude “Took branches of palm trees and went forth to meet Him and cried Hosanna. Blessed is He that cometh in the name of the Lord, the king of Israel.” Within some religions, it is stated that the palm leaves and robes were placed on the ground in front of Jesus as He entered Jerusalem similar to a “red carpet” greeting.

The history of Palm Sunday appears early in the eighth century. “This Palm Sunday procession and the blessing of palms seems to have originated in the Frankish Kingdom. The earliest mention of these ceremonies is found in the Sacramentary of the Abbey of Bobbio in northern Italy.” After a few years, the celebration of this procession discontinued. What remains today is the blessing of the palms, a procession to the church and the celebration of mass.

Earlier, DrMoras read out prayers and blessed the palms before people carried the same in procession. Fr Jacob Britto, Spiritual Director, BCCRS, read the relevant scripture and also he read out the Passion reading as part of the liturgy.

Prayers in different languages were part of the ‘Prayer of the faithful’.

Bro. Cherian Ramapuram, Chairman, BCCRS, in his vote of thanks expressed gratitude towards DrMoras who started the Lenten prayer programme eight years ago. He thanked Fr John Abraham, parish priest, Ascension Church, who was also concelebrant of the Eucharist besides FrBritto. Bro Cherian, a successful businessman and a preacher himself thanked several priests, different choir, preachers, sister Sunita, Bro Varghese Joseph, vice chairman, the prayer warriors and the task force besides many others and groups that contributed towards the success of the 40-day programme.