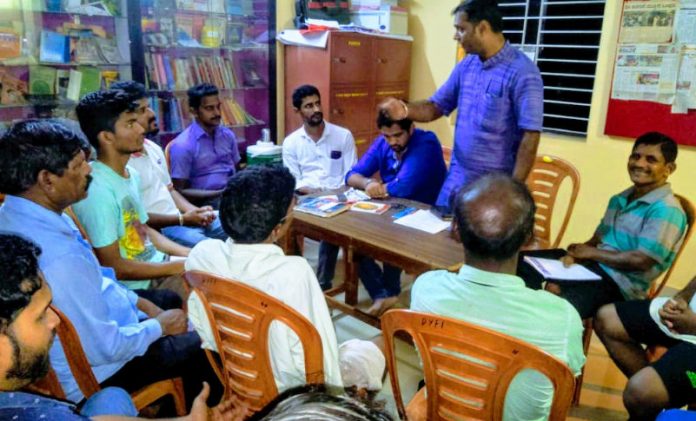 ‘In the Name of Chowkidar, Modi Govt has Looted the Country’ – Sunil Kumar Bajal

Mangaluru: “From the past five years PM Narendra Modi has been giving false promises of bringing back the black money stashed in Swiss banks, curb corruption and to bring Ache Din to the people of the country. But now in the name of Chowkidar, the Modi government is looting the Country”, said the CPI(M) district Secretary Board member Sunil Kumar Bajal.

He was addressing the CPI(M) party workers and well-wishers at Urwa Stores here on April 13.

Sunil Kumar Bajal further said, “Modi is calling himself Chaiwala, Fakir and Chowkidar and fooling the people. Lying continuously to the people, he has destroyed the economy of the country. If Modi government comes to power again, peace and harmony in the country will be in danger.”

Recalling the promises made during the 2014 LS polls, Sunil Kumar Bajal said, “Modi had promised that he would create two crore jobs every year if he came to power and had also announced, “Make In India”. Accordingly, in 5 years 10 crore jobs should have been created but he has not even been able to create 10 lakh jobs which the central government itself has confirmed.”

Sunil also said, “Due to demonetization lakhs of people lost jobs. Due to the wrong policies of the government small industries have been closed and labourers have lost their jobs. The Rafale scam is the biggest scam under Modi. When the court had asked for documents related to the Rafale deal, the NDA government said that the documents were stolen which proved that they have agreed that there is corruption in the deal.”

“From the past 25 years the BJP has been winning the elections in DK but no development has taken place in the district. Being an MP for the past 10 years, Nalin Kumar has not done anything for the development of the district. He was busy in caste politics filling hatred in the minds of the youth. Instead of creating jobs by bringing industries to the district, he has created fear and has also said that he is ready to set the district on fire. Such persons in high positions are black dots for the city of intellectuals. We need to get together to defeat such a candidate and see that a secular candidate wins.”