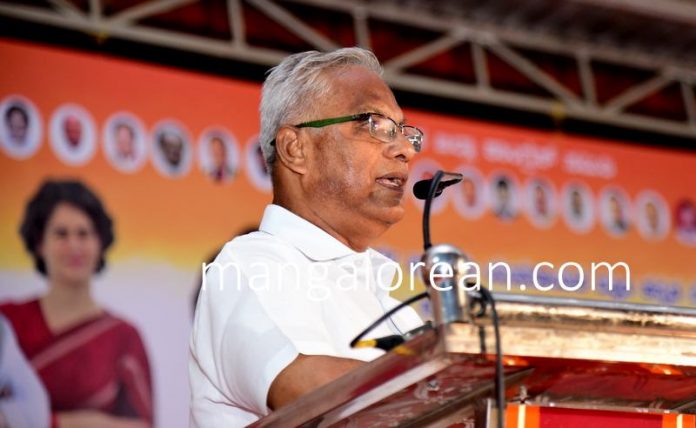 Mangaluru: A district Congress held a public meeting at the Kadri Grounds here on April 14.

Addressing the party workers former MLA J R Lobo said, “In Mangaluru Modi had said that if he is re-elected as the PM he will appoint a separate Minister for Fisheries and provide all the facilities. I would like to ask, from past 5 years when Modi was the PM, why did he not do that. Modi is playing with psychology. He was not able to do anything in the last five years but now he says that we will set up a separate ministry for fisheries. 8 fishermen have gone missing but till date, the PM did not take any measures to find them. The BJP minister had come to shed crocodile tears in front of the missing fishermen families. The fishing boats get diesel subsidy from the state government. What is the NDA government giving? Modi is lying just to fool the fishermen.”

Lobo further said, “From 2006 to 2014 when the Congress was in power, nationalized banks have given loan, but Modi says his government has given double the loan in 2014 to 2019 and the Congress during 2006 to 2014 was getting the commission for giving the loan. I would like to ask did Modi get a commission while he had given loan during his tenure? Being the PM he should think before putting allegations? When the government gives loan industries will grow. Do we need such a liar as our PM? We are intellectuals and we need to think well before we cast our votes”.

Lobo also said, “Modi also says that the Congress government did not do anything for the defense of the country. When India became a Republic we had only 10 tankers. In 1947, when we got our independence our borders were not marked and secured. In 1971 during the war with Pakistan and when Indira Gandhi was the PM, our soldiers had marched to Lahore and more than 90,000 Pakistan soldiers surrendered.”

“Our PM does not speak any truth. When he took charge as PM, he showed the people all the good things only in the mirror and fooled the people. He forgot the promises he had made five years ago and now he is making new promises. Nalin has released the manifesto but there are no development projects in his manifesto. I would like to question Nalin, what is his contribution to creating jobs? What is his contribution in bringing industries to DK? What is his contribution to improving the IT sector? We have good potential in Mangaluru. For the second phase of SEZ, Nalin Kumar had opposed land acquisition. We need an express highway from Mangaluru to Bengaluru and Mangaluru to Goa. When Oscar was the minister, he had planned a tunnel in Shiradi Ghat with Japanese Technology. Experts from Japan had come to Mangaluru and held a meeting and I had attended the meeting as an MLA. If we would have constructed such a highway, Hassan would have become an industrial zone and Mangaluru would have become the center. But the MP is not interested. Now Vijaya Bank is merged, the airport has been given to Adani. The highways are not completed from the past 10 years. In this election, we need to think well before casting our valuable votes because we want an able leader who can raise our voice in the parliament and Mithun is the right candidate.”