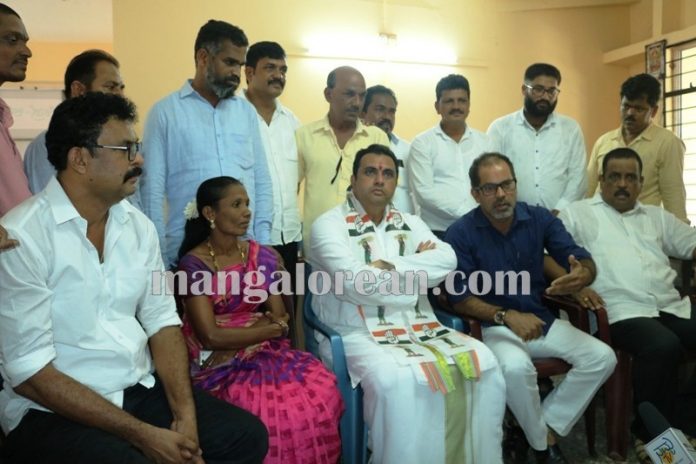 Kundapur: BJP’s dissatisfied leaders who opposed the candidature of MLA Haladi Srinivas Shetty in Kundapur during the last assembly elections have decided to extend their support to Congress-JDS alliance candidate Pramod Madhwaraj.

Speaking to media persons Kishore Kumar said, “Our wish is that Narendra Modi should become the prime minister of this country. At the same time, we need a capable and efficient Member of Parliament for the Udupi-Chikkamagaluru Lok Sabha constituency who should be easily accessible to the people. Pramod Madhwaraj is a capable person to become the Member of Parliament and we are ready to support him.”

Kishore Kumar further said, “In Last Lok Sabha elections we had worked for Shobha Karandlaje but she has neglected the constituency. This time till today, none of the BJP leaders have contacted me or have they invited me to any party programmes. Today the Congress-JDS alliance candidate Pramod Madhwaraj has asked us to support him and we are ready to give him our support”.

Former Kundapur Town Municipality vice president who was recently expelled from the BJP, Rajesh Kaveri said, The BJP in Kundapur is being controlled by a single man which is very painful. There is no respect for those who have built the party in Kundapur. Pramod Madhwaraj is the best choice for the Udupi-Chikkamagaluru Lok Sabha Constituency and personally, we are supporting him”.

Congress-JDS alliance candidate Pramod Madhwaraj said, “My wish is that Rahul Gandhi should become the prime minister of this country. As a candidate, I have asked the support of the BJP leaders. I have not held any talks with them in regard to joining our party”, he said.

Congress and JDS leaders were present on the occasion.

That’s a step forward. Don’t look at party but send a able, learned and efficient MP from the constituency to the parliament so they will facilitate such steps to develop the constituency. Bravo to BJP leaders who have supported Pramodanna.