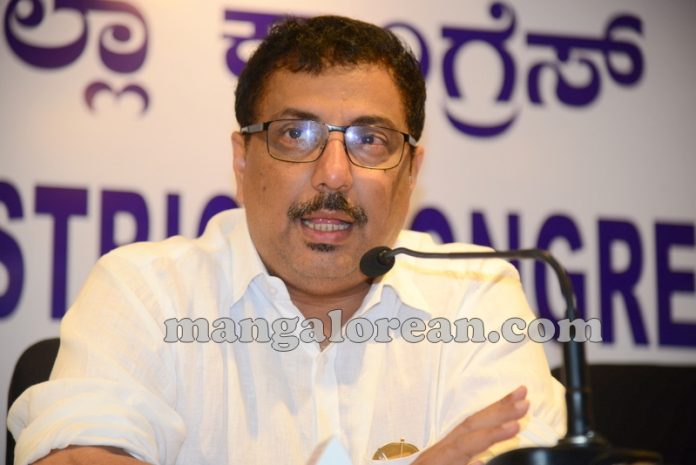 Mangaluru: “On April 13, Modi came to Mangaluru for the election campaign but he never mentioned MP Candidates Nalin Kumar Kateel or Shobha Karandlaje’s name because he is aware of their poor performance and that they will not win the elections. Modi had addressed a large crowd at the Nehru Maidan but did he mention anything about his promises he had made during 2014 and whether he has fulfilled them? This time he was talking something else other than his old promises”, said the Chief Coordinator of Shasthavu Sri Boothanatheshwara Temple Vijaynath Vittal Shetty in a press meet held at the District Congress office here on April 15.

Addressing the mediapersons Vijaynath said, “Whenever Modi comes to Mangaluru, he criticizes the Congress leaders Sonia Gandhi, Rahul Gandhi and calls them corrupt. He always says that the Congress leaders have black money. In 2014, he assured of bringing back the black money from the Swiss banks. But even after 5 years, he is not able to bring back the black money. This time when he came to Mangaluru I thought that he would assure of giving some funds for the development of the district but he did not utter a word on the development of our district.”

Vijaynath further said, “On April 13, people had gathered at the Nehru Maidan in large numbers to listen to Modi about what he would do for the welfare of the people of the district, but he never spoke anything about it. In Dakshina Kannada, the BJP workers are asking votes for their candidate in Modi’s name because they are aware that Nalin Kumar Kateel has not done any development work for the district. If we see Goa or Kerala state they have given importance for the development of tourism. Why is our MP not taking any initiative for the development of tourism in DK?” Vijaynath questioned.

Vijaynath Shetty urged the people of DK to vote for the candidate who will work for the development of Tulunadu and not vote based on party or its leader.