‘Never Give Up, Aim Big & Fulfill Your Dreams Even, If You’re a Transgender’- Naaz Joshi, India’s 1st Transgender to Win ‘Miss World Diversity 2018’who was the Chief Guest at Parivarthan Charitable Trust Transgender’s Day Celebration held at Roshni Nilaya on 12 March 2019.

Mangaluru: Quoting Ban Ki-Moon, Former Secretary-General of the United Nations, who had said “To those who are bisexual, or transgender-let me say- you are not alone. Your struggle, for the end to violence and discrimination, is a shared struggle. We all stand with you, and I call upon all countries and people, to stand with you too. A historic shift is underway. We must tackle the violence, decriminalize consensual same-sex relationships and end discrimination. We must educate the public. I call on people of conscience to make this happen. The time has come.”- and yes truly the time has already come where Transgenders are getting a spot in the society and their efforts are being highlighted in recent times, even though much more has to be done. 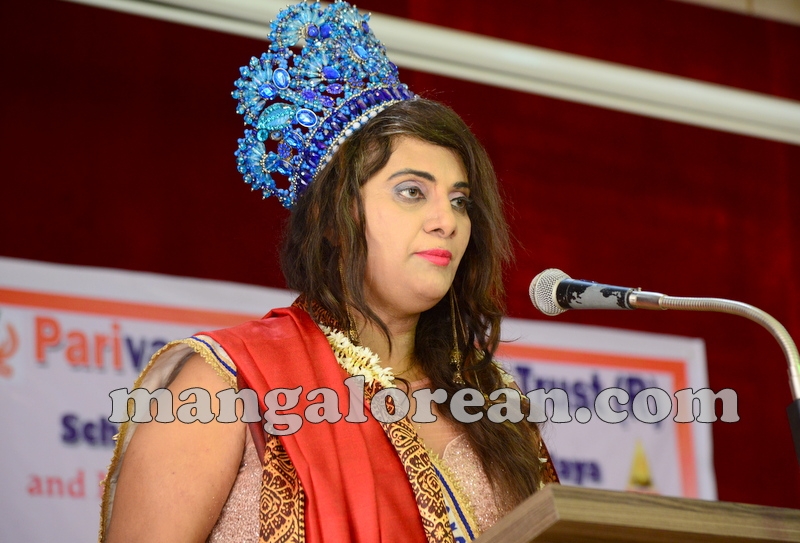 Even though we all celebrate Mother’s Day, Father’s Day, Children’s Day, Grandparent’s Day, Valentine’s Day, etc., but until two years ago no one thought about Transgenders who are also humans and have the same feelings like us. They too need to be recognized and encouraged for their talents by society. Most of the transgenders do not get the opportunity to come out and mix with other people in society due to certain barriers and the mindset of the people. So in order to make a difference in the lives of Transgenders and also to encourage them, Parivarthan Charitable Trust (PCT) initiated to celebrate the FIRST ‘Transgender’s Day’ two years ago, and it was for the First Time in the History of Karnataka, probably in the Nation or Internationally that a Transgender’s Day was organized. 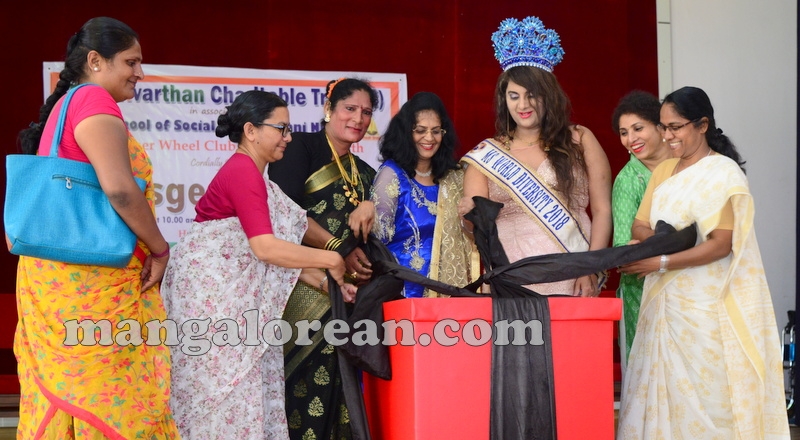 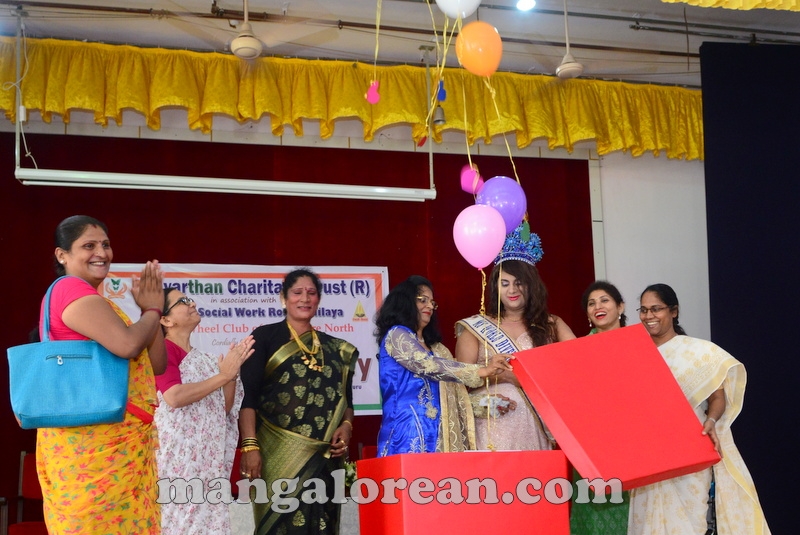 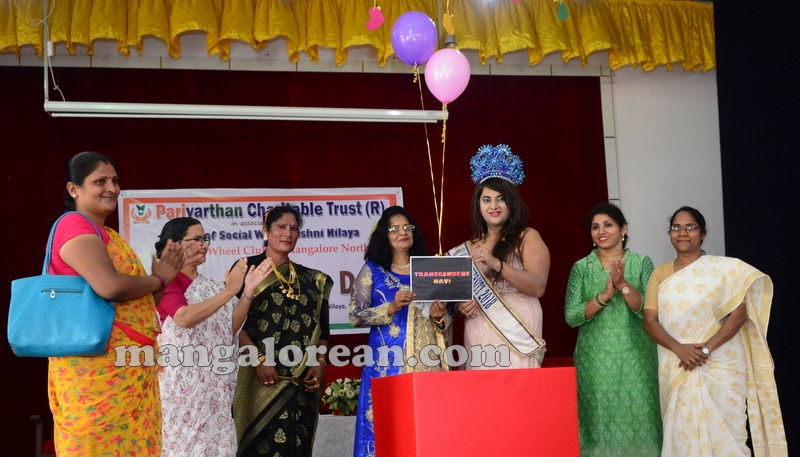 Compliments to Violet Pereira, the founder of PCT for her thoughtful thinking of the Transgenders, whom she has been fighting for their rights and justice since years- and for adding another feather in her cap, by introducing “Transgender’s Day”. And the tradition has continued, where the Transgender Day celebration was held today, Tuesday 12 March 2019 at Roshni Nilaya, in association with School of Social Work Roshni Nilaya and Inner Wheel Club-Mangalore North. The audience was predominately of mixed colour, comprising of a large number of Transgenders, lecturers, students, and well-wishers. The programme began with a prayer song rendered by the student Vivian, followed by welcome address by the vice president of PCT, Sandhya.

The programme was inaugurated in a unique way from the students of Roshni Nilaya, followed by cutting the cake, which also marked the birthday of Violet Pereira. The chief guest of the occasion Naaz Joshi was felicitated on the occasion for her achievements, along with Pavithramma from the Transgender community. A wheelchair sponsored by MRPL was also handed over to Gangamma, yet another transgender by Lakshmi Kumaran – the Deputy General Manager of MRPL. 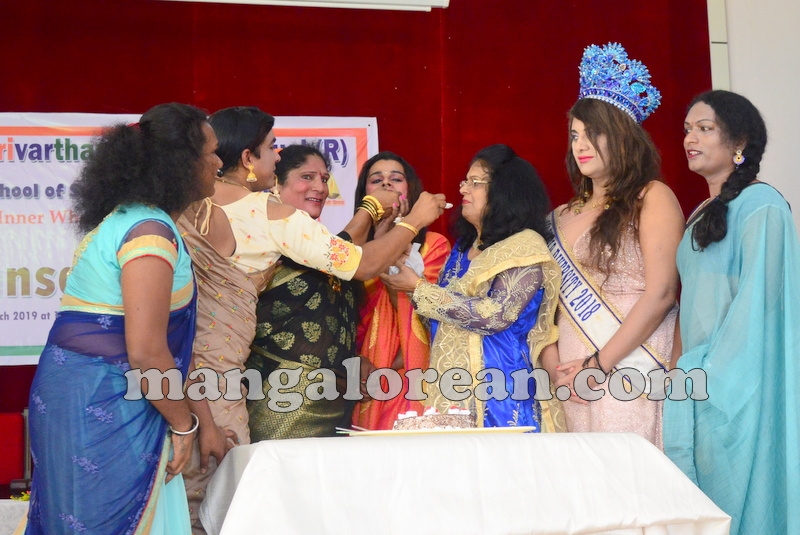 Founder of Parivarthan Charitable Trust Violet Pereira gave an elaborate history of the Trust, and its activities and the facilities provided to the Transgenders, like making them avail of the Aadhar Card, voter’s ID card, etc. Addressing the jam-packed audience the Star of the day, chief guest Naaz Joshi said, “I was never wanted in the society, my parents sent me away. I willed and finally got what I longed for – respect, and that too when I was crowned as the first transgender in India to bag the “Miss World Diversity 2018′ title. To live with all the abilities in life is not a big deal, but having disabilities in life and then living your life perfectly is the biggest achievement in life and the people who have this spirit are the born survivors”.

“I have proved and shown to the world that it’s not the physical capabilities or the appearance that make you achieve something in life. Rather, it’s your spirit and attitude that encourages you to achieve something in life. It makes you stand somewhere in society. Being a social activist, I have worked for various issues like the education of girls, health, and hygiene. I have faced all the difficulties but didn’t give up. I was even raped by my cousin. When I was unemployed I landed into the prostitution trade. But not for long, when I preceded 22 Female contestants and became the First Transsexual Miss World Diversity 2018, today the whole world says “We are proud of you, Naaz” added Joshi. 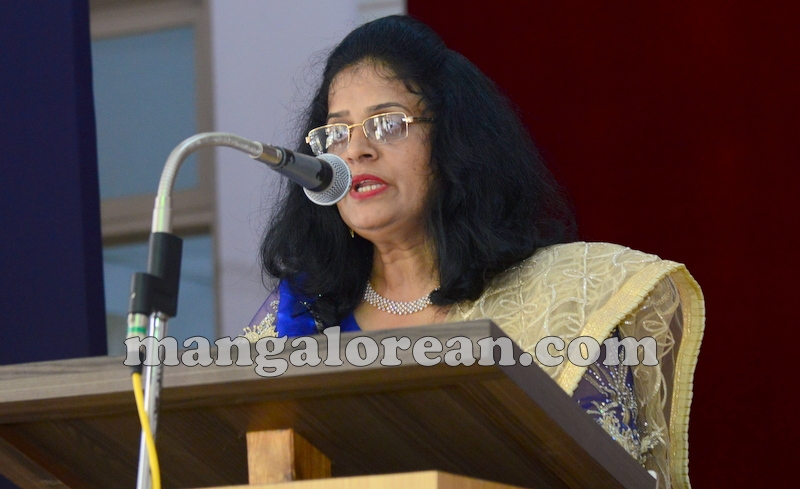 She further said, “My parents sent me to Mumbai so that people wouldn’t come to know that I was a transsexual. Since childhood, my life has been full of struggles. I started working with fashion designers early in my career; however, I had to quit that job, because I felt unsafe there due to gender issues as I feared that men would bad-eye her. Due to this, in 2013, I went through a sex reassignment surgery and began modeling for various brands. When I got to know that Miss Universe pageant has changed the participation rules in 2012 and now allows transgenders to participate in the beauty pageant, I decided to try my luck.

“I worked in restaurants and went through many unfortunate happening, but that didn’t divert me from my goals. I wanted to do something that would earn me respect in society. Education mattered to me a lot, and I managed to gain admission in National Institute Of Fashion Technology (NIFT) and scored a top rank there. After that, I pursued an MBA in Marketing from IMT through correspondence as I was not given regular admission. I feel proud to say that I was the first transsexual women in India who have been portrayed on the cover page of a reputed magazine, Tehelka”, which had record sales. But even though I had put lots of efforts, I feel that I never got the due respect that ‘normal’ people usually get. When I entered modeling, I met Rishi Taneja, a well-known photographer and he made a biopic on me. After seeing that film, some media houses gave me a big break and I made it to the cover page. I was not accepted at first, but I didn’t give up thinking of ways to make my life better,” added Naaz.. 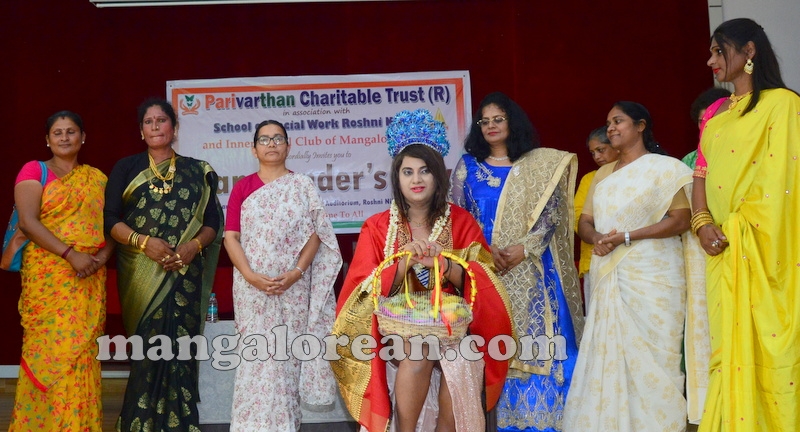 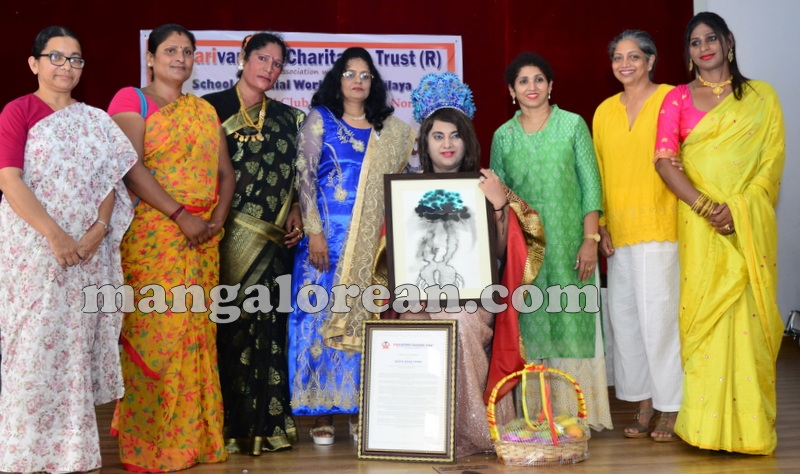 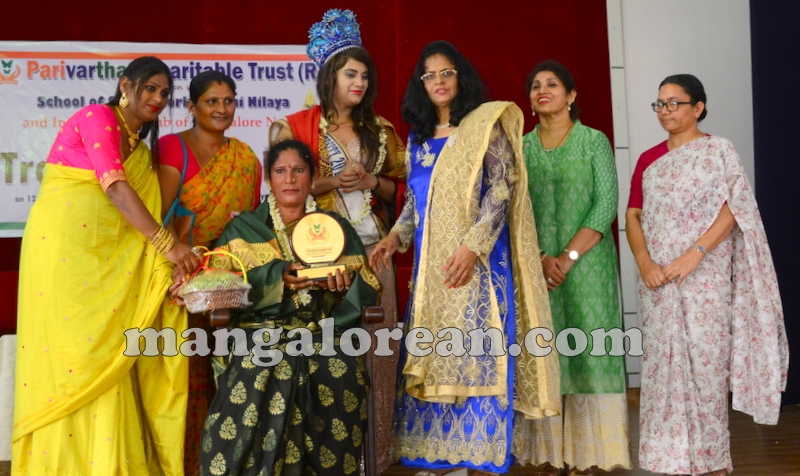 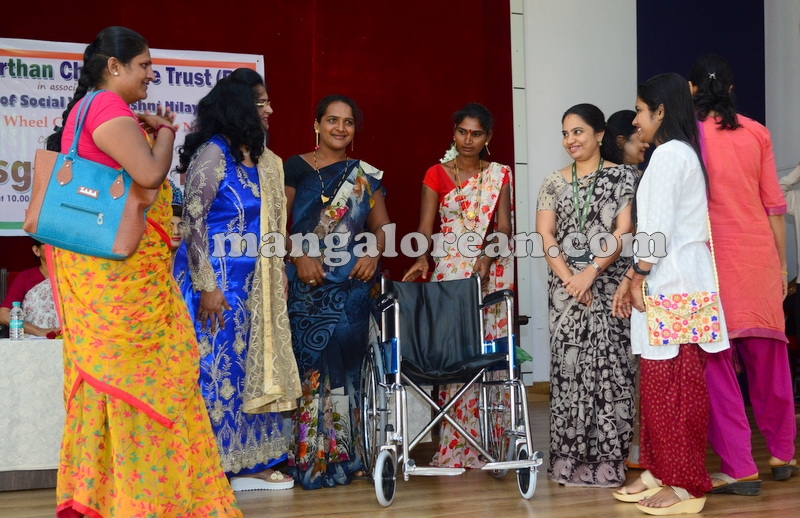 Naaz added saying, “During my photo shoot for the cover page of a magazine, I felt that I was just dreaming. But then when my parents called me up and said, “We are proud of You”, it was the happiest moment for me. I believe humanity to be my religion, and I think of the love and respect that I didn’t get, and I still have the hopes that I would be able to give it to those people who need them. It’s nothing like if society has not accepted me then I should do the same. I was overwhelmed when they made me a brand ambassador for a Sanitary Napkin, and I interacted and briefed about these sanitary pads in nearly 35 rural areas in India, and women loved me and showed respect to me for my qualities. After winning Ms World diversity pageant I have worked for women empowerment and employment. I believe in action and want to set up a learning center where people can acquire employable skills”.

In conclusion, Naaz Joshi said, “I always speak from my heart and not fake talk. Don’t worry if you are ugly, pretty, dark or fair, because at the end of the day you are always a human being. Be motivated, because after every dark night is a bright sunny morning the next day. Just be yourself, trust in yourself, and success will all be yours. Never give up, aim big and fulfill your dreams, even though you are a transgender or not. Before I conclude, I would like you all to see my Tamil movie which will be released in a few months, where I am an actress in the lead role. Thank you and keep supporting the transgenders”. 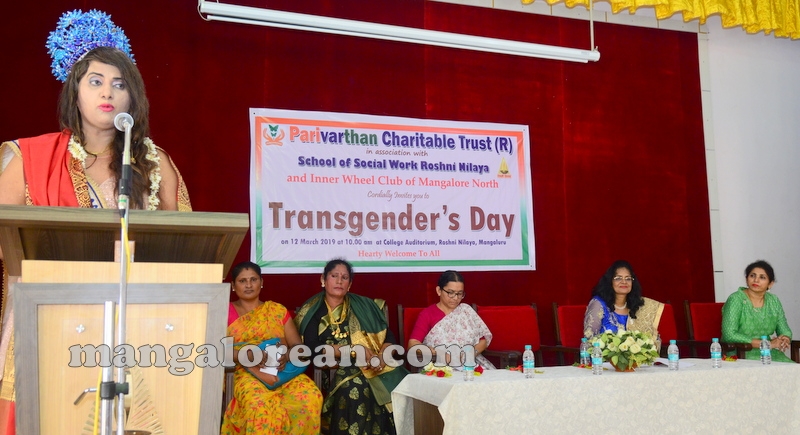 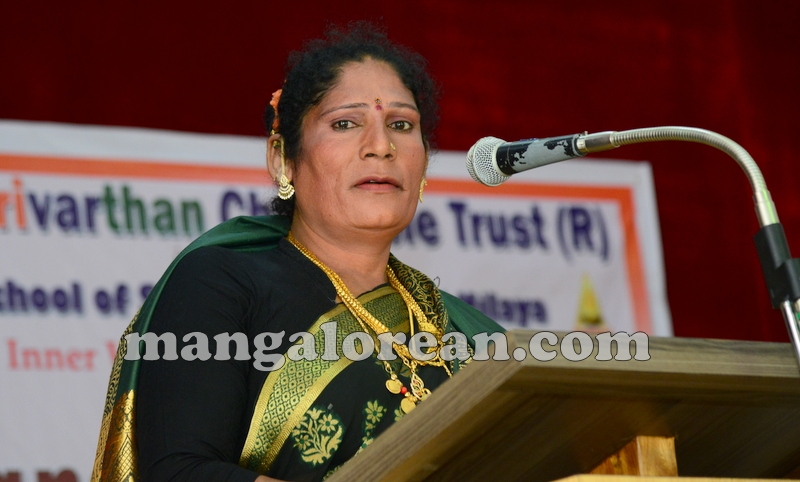 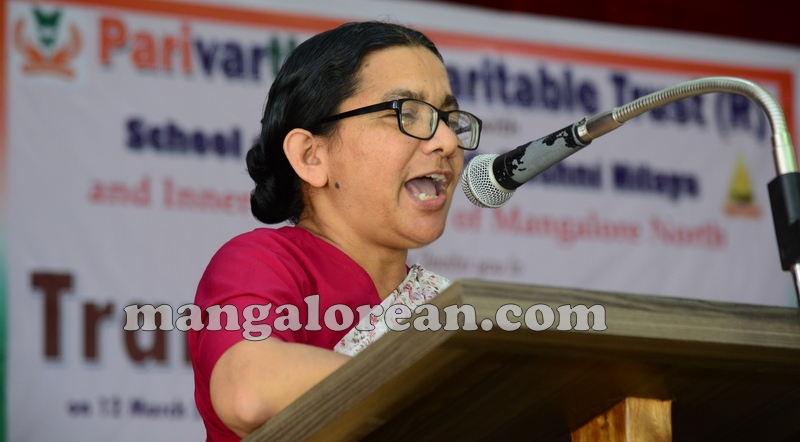 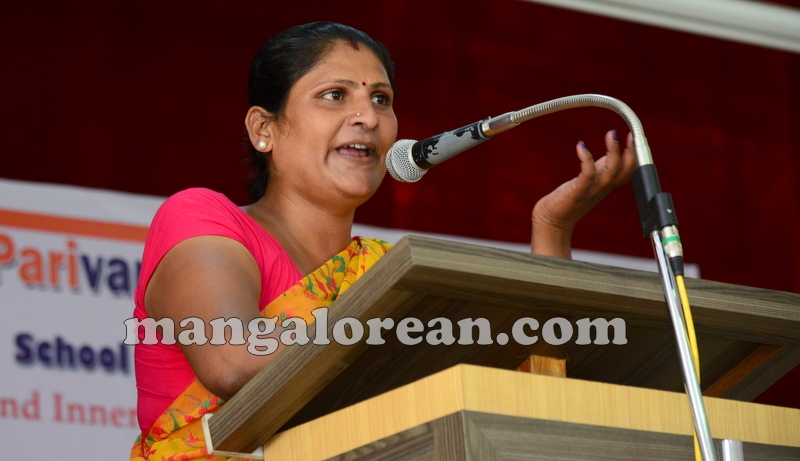 Speaking on the occasion, principal of Roshni Nilaya Juliet CJ complimented PCT for their initiative in creating a ‘Transgender’s day, and also for the care towards the Transgenders in trying to bring them up in the society that we all live as human beings. “People are more conscious of transgender people now than ever before, thanks to the fact that individual things have already happened to make that so. Things seem to need to build up a certain amount of momentum and backing before the general public and the media and Trust like this one, acknowledge them. Let us all treat Transgenders equally, and make them feel that they too belong in the society that we all live.” 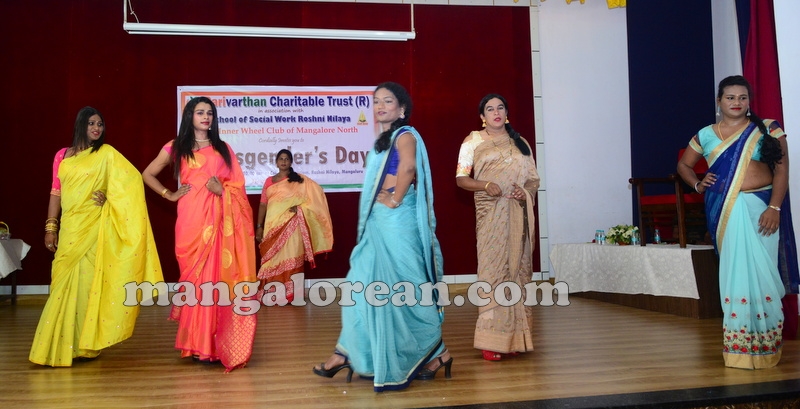 In her Presidential address by Ramya Gowda of PCT expressed her sincere thanks to PC for helping them to come up in their lives. “The Trust has been very helpful to all of us (Transgenders) and we will try our best to bring a change in our lifestyle. I thank the Trust for making us known in the society as human beings and also for getting us the facilities as others enjoy,” said Ramya. The vote of thanks was delivered by Miss Nashma Khatija, and the programme was compered by Miss Merula Pinto, both students of Roshni Nilaya. President of Inner Wheel- Mangalore North Ms Neena Shetty also graced the occasion. 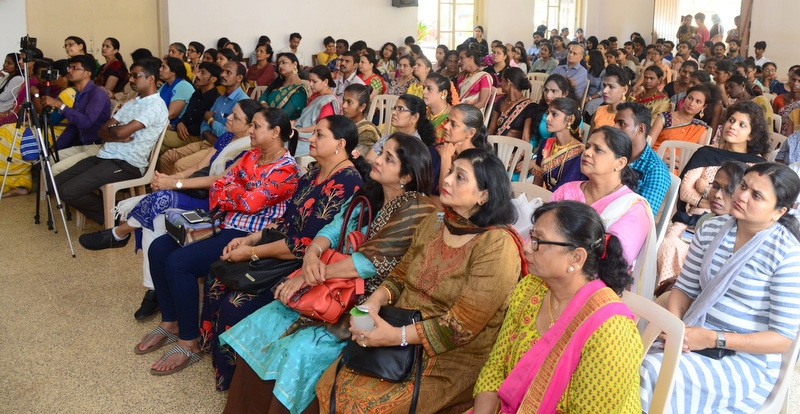 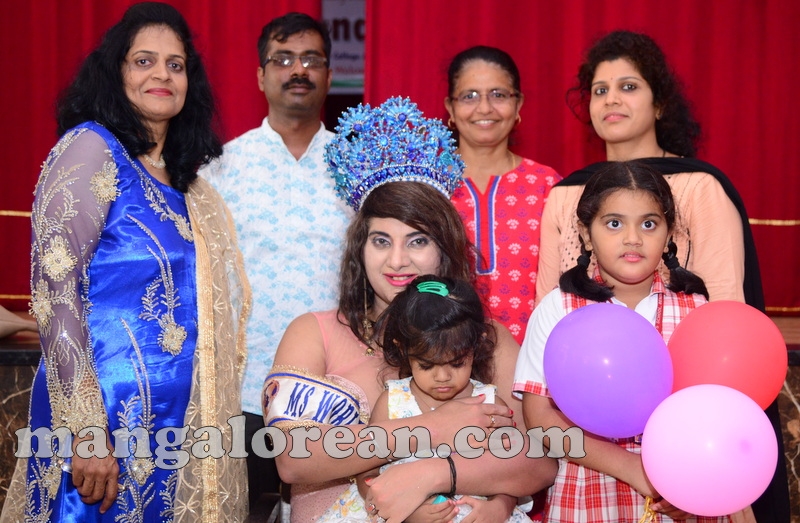 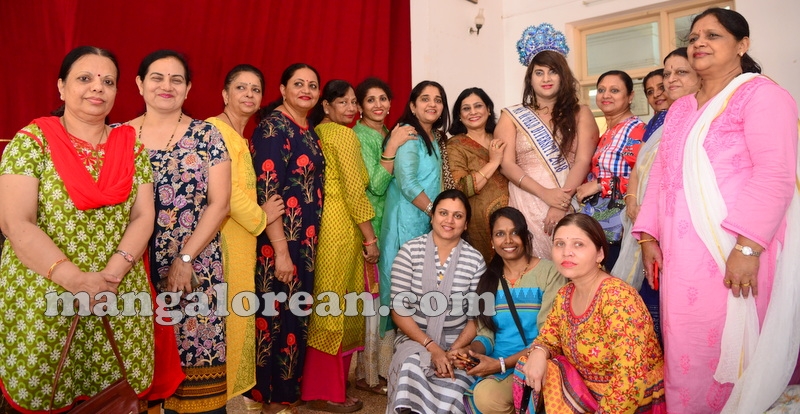 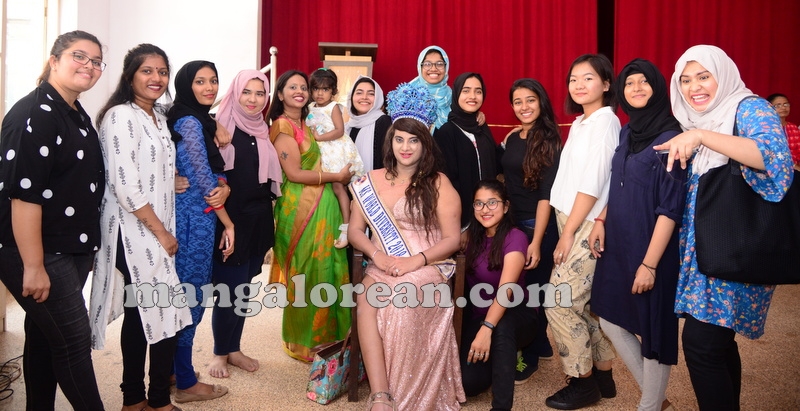 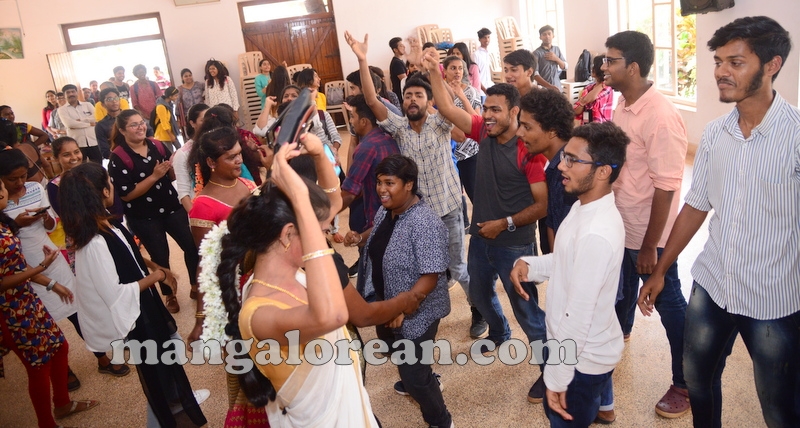 The formal function ended with a fashion show and dance put up the PCT members, followed by singing and a dance performance by the students of Roshni Nilaya. In conclusion, we need to commend PCT which has always been there to address the problems of the Transgenders since its inception and has been trying to bring every Transgender in and around Mangaluru to the mainstream. There are so many unsung, un-wept and un-honoured in the journey called life. Time and again these Transgenders continue to do great work without even asking for anything. It behooves us to elevate such human beings to such recognition, encouragement, goodwill or help is sometimes the only thing they (transgenders) need, like a pat on the back, like we felicitated Naaz Joshi and Pavithramma. And remember, Transgenders are also people. They’re human beings, and have a human life!