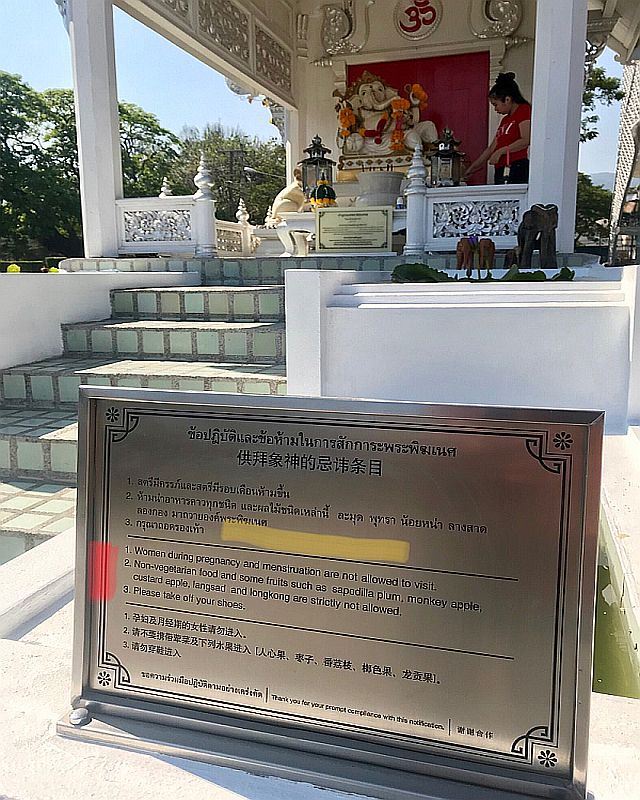 Stop this shaming of menstruation

(CNS): The photograph accompanying this article, was clicked on Chinese New Year (16th February 2018) in Chiang Mai, Thailand. It is a signpost/ notice written in Thai, English and Chinese (in that order) in a temple, having a statue of Ganesha, situated in the heart of the city in front of Maya Mall. I reproduce the English version:

“1. Women during pregnancy and menstruation are not allowed to visit.
2. Non-vegetarian food and some fruits such as sapodilla plum, monkey apple, custard apple, langsad (langsart) and longkong are strictly not allowed.
3. Please take off your shoes.
Thank you for your prompt compliance with this notification.”

This disgustingly shocking and audacious signpost appears in a country where women value their bodily autonomy and rights fiercely or so do I believe. This seems to be the work of some ignorant and conservative religious Hindu outfit that is up in arms against gender equality, but, of course, it must be having the sanction of the concerned local authorities. I do not know if there have been protests against this disparaging and discriminatory directive.

Perhaps for Thai women, the notice does not merit any attention, as they couldn’t care less, having already achieved a high level of independence. But in countries like India, sexual and reproductive health and rights, that are an integral part of gender justice, are still a far cry for most women. Bizarre cultural beliefs regarding menstruation are very much prevalent India and Nepal (and maybe in other countries of this region too).

Menstruation in India has always been surrounded by myths and is still a taboo topic, that is discussed in hushed tones, if at all. In Indian culture, women are believed to be unclean and impure while menstruating and are thus forbidden to enter temples or take part in religious activities. Menstruating women are also deemed unhygienic and hence not allowed to cook food or even touch certain food items like pickles etc. for fear of contaminating them. These practices are rampant in even the so-called educated households. In Nepal, the local Hindu culture dictates that women live in a cattle shed or a makeshift hut during menstruation- a practise known as Chhaupadi. It was banned by the Nepalese Supreme Court in 2005 but is still prevalent.

Yet, we all know that menstruation is a normal biological process and that menstruating girls and women are not unclean, rather they are normal and healthy. Also as long as general hygiene measures are followed, no scientific test has shown menstruation as the reason for spoilage of any food.

When women are treated differently because of a naturally occurring cyclic phenomenon, it creates shame, embarrassment and humiliation and adversely impacts their mental and physical health, as well as their right to equality in various spheres of life. A large number of girls are forced to drop out of school in rural India because of menstruation.

It is important to combat the myths and social taboos associated with menstruation to, not only improve the reproductive health of girls/women but also allow them equal opportunities and not restrict them in their daily lives simply because they are menstruating. Feminist organisations across the region have been fighting against these and other discriminatory practices that are so rampant even today in some societies.

The aforementioned notice goes one step further by barring pregnant women too from the temple premises as if they too are unfit to enter the sanctum. Whew!

Subtly trying to perpetrate such decadent beliefs (all in the name of religion), and that too in a progressive country like Thailand, is a dangerous trend and must be nipped in the bud. Statements like these simply endorse stereotype practices that are an affront to the dignity of womanhood and stumbling blocks in the path of achieving gender justice. Women human rights defenders have to be vigilant evermore to prevent the spreading of such false propaganda.

(Shobha Shukla is the Managing Editor of CNS (Citizen News Service) and has written extensively on health and gender justice over decades. Follow her on Twitter @shobha1shukla or visit CNS: www.citizen-news.org)