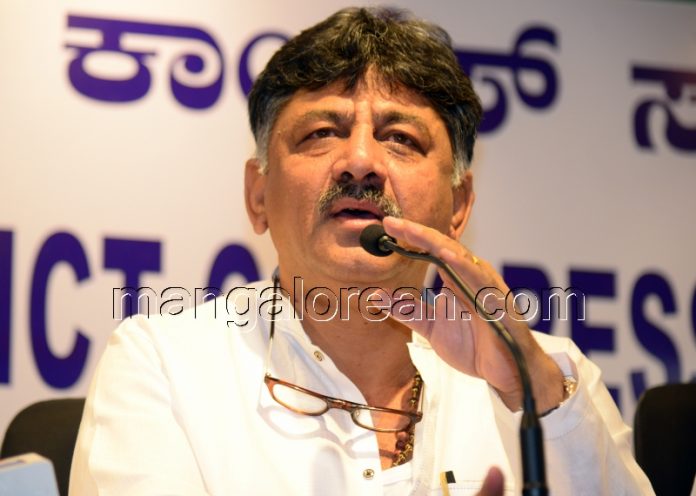 Mangaluru: “Since 25 years, there has been no Congress MP from Dakshina Kannada. This district has a long history. We call Mumbai the financial capital of this country. However, when Manmohan Singh was in power, he had told me that 39 percent tax is coming from Bengaluru. The whole world is watching Bengaluru. If the state of Karnataka has obtained a reputation, it is because of Mangaluru and the Karavali region. The educational institutions, financial institutions, religious temples, service sector, export companies and ports of Mangaluru make it an important centre of Karnataka,” said Minister for Irrigation and Medical Education DK Shivakumar in a press meet held at the DCC Office, Mallikatta here, on April 15.

Addressing the mediapersons DK Shivakumar said, “I want to ask the MP of this district, what is your report card? What is your contribution to your constituency? Several medical and engineering institutions are educating the people here. But all the young people, the best products, are getting educated here and going to Bengaluru, Mumbai, or Saudi for jobs. Ramanath Rai had come to Bengaluru regarding the Vijaya Bank issue. Has Shobha Karandlaje or Sadanand Gowda or Nalin Kumar Kateel brought all the 28 MPs together and visited the Central Govt, even for a day? Did they ask why they were merging our bank with a bank from Gujarat?”

He further said, “For Mangaluru, we are providing revenue for all the temples of this region. There are several valuable properties here in Mangaluru. There is a nice airport here and there are good connection facilities here. People come here from outside the state and outside the country. But has the Central Govt. brought any scheme here to benefit the district? Even 10 rupees has not come to the district in the name of the Smart City scheme. Why have they stopped talking about Acche Din? There are no jobs for young people who have passed out of college. That is why we have to bring about a change in Mangaluru. That is why we have chosen an MP candidate (Mithun Rai) who is young, a devotee of Hanuman, and belonging to the Bunt community. He will take everyone forward together.”

When asked about the absence of state leaders campaigning for Mithun Rai, DK Shivakumar said,” I know that the Prime Minister has visited Mangalore and gone. It shows how seriously they are taking our candidate.”

In his statement to the press, DK Shivakumar had described Congress candidate Mithun Rai as a Hanuman devotee and a member of the Bunt community. When asked if this was meant to target the votes of one community, DK Shivakumar said, “I am just telling his background. There are no temples dedicated to Ram’s father. But there are many temples dedicated to Ram’s protector Hanuman. People always praise those who save and protect them.”