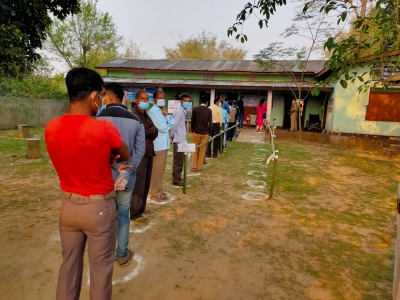 Guwahati: Around 10 per cent voters have cast their ballots so far on Saturday in the first phase of the Assam Assembly polls which is underway amid tight security in 47 constituencies, according to election officials.

Men and women in large numbers queued up in front of the polling stations well before the voting started at 7 a.m.

Polling will continue till 6 p.m as the Election Commission extended the time by an hour in view of the Covid-19 induced situations.

Twenty-three women aspirants are also in the fray.

Covid-19 protocols for the voters, including social distancing and thermal screening, are being maintained.

In the 2016 elections, the ruling Bharatiya Janata Party-led alliance secured 35 of the 47 seats, while the Congress won nine and the remaining three seats by other parties.

According to the election officials, over 30,000 Central Armed Police Forces along with thousands of state security forces have been deployed to maintain law and order during this phase.

No untoward incident has been reported so far from any of the 12 districts where the balloting processes are underway.

In a unique gesture, the election officials donated saplings to the voters in the model polling stations, which were decorated with colourful balloons.

The 126-member Assam Assembly will go to the polls in three phases.

The results will be declared on May 2.