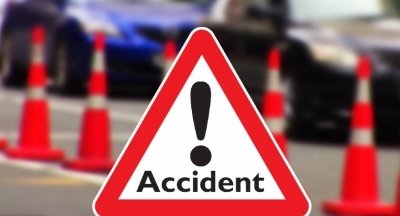 11 killed after SUV collides with bus in MP’s Betul

At least 11 people were killed and nearly six injured after an SUV they were travelling in collided with a bus in Madhya Pradesh’s Betul district, said police.

Bhopal: At least 11 people were killed and nearly six injured after an SUV they were travelling in collided with a bus in Madhya Pradesh’s Betul district, said police.

The accident happened late Thursday. Preliminary investigation found that due to high speed the SUV driver lost control over the vehicle and it collided with a bus.

The SUV was coming from Amravati (Maharashtra) and collided head-on with the bus, resulting in deaths.

The Superintendent of Police said that the accident happened around 2 a.m. when an empty bus was moving on the road and the SUV collided head-on. “All the persons who died were labourers who had been working in the Kalamata village in Amravati district for the last 20 days. They left from Amravati at around 9 p.m. on Thursday and met with an accident here,” the Betul Police said.

Madhya Pradesh Chief Minister Shivraj Singh Chouhan also expressed his condolence and announced a compensation of Rs two lakh to the kin of each deceased and Rs 10,000 to injured persons.