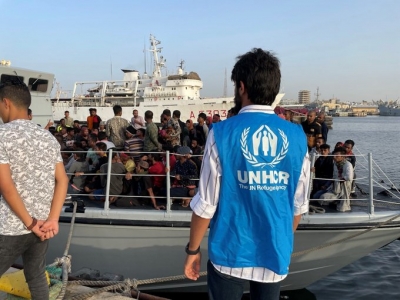 Tripoli:  The UN Refugee Agency (UNHCR) has announced the evacuation of 133 asylum seekers from Libya to Rwanda.

“On the first humanitarian evacuation flight this year from Libya, UNHCR, has evacuated on Thursday evening 133 vulnerable asylum-seekers to Rwanda. The humanitarian flight had been on hold since April,” Xinhua news agency quoted the Agency as saying on FRiday said in a statement.

The evacuated asylum seekers, including women and children, are from Eritrea, Somalia, South Sudan and Sudan, the statement said, explaining that most of them are victims of trafficking or survivors of gender-based violence and other forms of abuse.

“Since 2017, over 6,300 refugees and asylum seekers have departed Libya through humanitarian evacuations or resettlement to third countries,” the statement added.

Thousands of illegal immigrants, mostly Africans, choose to cross the Mediterranean Sea from Libya toward European shores, due to the state of insecurity and chaos in the North African country following the fall of the late leader Muammar Gaddafi’s regime in 2011.