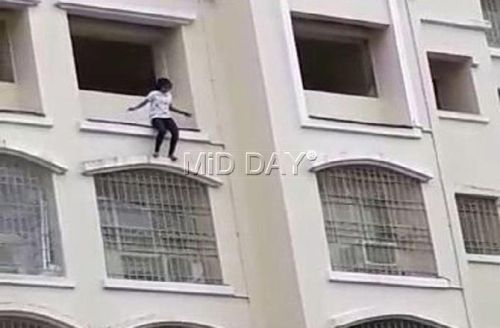 Mumbai: A 14-year old girl committed suicide by jumping off a high rise building in Thakur Village Kandivali East on Thursday evening. The incident was captured on camera.

The victim has been identified as Harshika Mayavanti, a resident of Gardenia building Thakur Village. She is survived by her parents and a 10-year-old younger sister.

According to police sources, the girl leapt from the 8th floor of Orchid Tower, which is adjacent to the building where she resided. The incident took place around 4.30 pm on Thursday.

According to the police, residents living on the opposite side of Orchid Tower saw Harshika on the parapet and tried to convince her not to jump. Much to everyone’s shock the girl jumped before any help could reach her. The entire episode was captured on a mobile video.

She was rushed to a nearby hospital and later shifted to Shatabdi Hospital in Kandivali where she was declared brought dead.

Harshika was a standard nine student in Gundecha education institute school in Kandivli. Her mother Arshika is a housewife and father Virendra Mayavanti works in an insurance company.

The reason behind the suicide is yet to be ascertained, no suicide has been found. The family is in shock and not in the condition to speak.