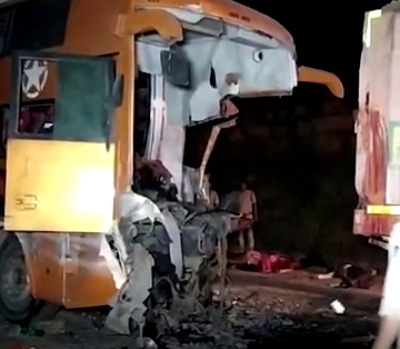 15 killed as bus rams into truck in MP’s Rewa

According to Rewa Deputy Inspector General of Police, Mithilesh Shukla, while 15 passengers died, over 20 were injured in the accident which took place late on Friday night.

“The bus, carrying 60 passengers, was on its way to Gorakhpur from Hyderabad when it collided with a stationary trailer-truck on National Highway 30 (NH 30) near Sohagi ghati area,” Manoj Pushp, Rewa collector told IANS, adding that while 12 people died on the spot, two passed away on their way to the hospital from Teonthar to Rewa and one succumbed to his injuries in the hospital.

The accident was so gruesome that the bodies trapped in the bus had to be pulled out with the help of JCB. Most of the deceased are said to be residents of Uttar Pradesh who worked as labourers, and were reportedly sitting in the cabin and on the front seat.

On being alerted, police personnel from Sohagi rushed to the site and launched a rescue operation.

The incident occurred between 11.30 p.m and 12 a.m on Friday night. While most of the injured were rushed to a hospital in Teonthar, those who suffered serious injuries were shifted to Rewa, said SP Navneet Bhaseen.

Chief Ministers of both the neighbouring states – Shivraj Singh Chouhan (Madhya Pradesh) and Yogi Adityanath (Uttar Pradesh) spoke to each other and instructed officials to ensure best medical treatment to the injured. The CMs also expressed their condolences over the demise of people, officials told IANS.

Chouhan added that the MP government will bear the cost of treatment of the injured. Passengers with minor injuries have been sent to Prayagraj by bus after preliminary treatment. The bodies are being sent to Prayagraj. He said that in this hour, “We stand with the families of the deceased,” he stated.