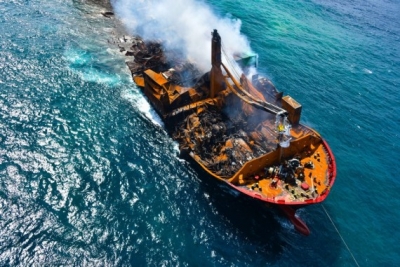 Colombo: The Sri Lankan government has confirmed that 176 turtles, four whales, and 20 dolphins had died and washed ashore on the country’s beaches up to July 7 as a result of the burning of the X-Press Pearl container ship in May.

Wildlife department officials said the dead marine animals had washed ashore on beaches from the southern to western coast of the country in recent weeks.

The Singapore-flagged X-Press Pearl ship was carrying 1,486 containers with 25 tonnes of nitric acid and several other chemicals and cosmetics from the port of Hazira, India on May 15.

The vessel sent out a distress call while being close to the Colombo Port on May 20, and soon caught fire.

Sri Lanka’s Marine Environment Protection Authority said that the burning of the vessel has caused a massive environmental disaster as beaches were damaged due to the debris which washed ashore.

A criminal probe is presently underway in finding out how the fire on board the container ship started.