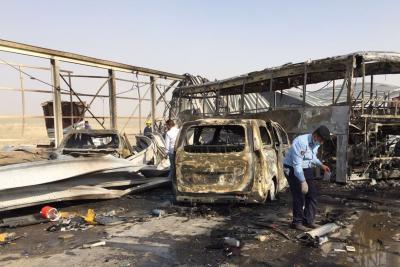 2 Kurdish officers killed in IS bomb blast in Iraq

Baghdad: Two officers from a Kurdish commando force were killed and seven commandos wounded in a bomb attack in Iraq’s semi-autonomous region of Kurdistan, a Kurdish security source said.

The attack occurred when a roadside bomb, planted by Islamic State (IS) militants, detonated near a vehicle carrying commandos affiliated with the Kurdish security forces known as Peshmerga, Xinhua news agency reported, citing the source.

The source said that the troops were conducting an operation to hunt down IS militants in a rugged area in the southern part of Sulaimaniyah province in northeastern Iraq.

He said the blast destroyed the vehicle, killing two officers and wounding seven commandos aboard.

Akam Omer, commander of the Peshmerga commando force, was among the wounded, the source added.

Also in the day, the Iraqi intelligence, in coordination with the regional Counter-Terrorism Service in Sulaimaniyah province, captured six suspects wanted for terrorist acts while they were preparing to flee the country, the media office of the Iraqi Joint Operations Command said in a statement.

Over the past months, Iraqi security forces have conducted operations against extremist militants to crack down on their intensified activities.

The security situation in Iraq has been improving since the defeat of the IS in 2017. However, its remnants have since melted into urban centers, deserts and rugged areas, carrying out frequent guerilla attacks against security forces and civilians.