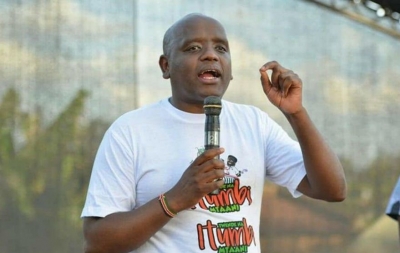 Nairobi:  Two Indians who went missing in Kenya in July this year, have been killed by the disbanded Directorate of Criminal Investigations (DCI) unit, a close aide of President William Ruto claimed.

Dennis Itumbi said in a Facebook post that Zulfiqar Ahmad Khan and his friend Mohamed Zaid Sami Kidwai were part of the Kenya Kwanza digital campaign team, and contributed immensely to the success of Ruto’s campaign.

According to The Nation, Itumbi said the evidence suggests that the two were in a cab that was blocked by the disbanded DCI unit.

He further said that Khan, Kidwai and their taxi driver were all dragged into another car and killed in what he called the ‘killer waiting bay’, a container used to kill Kenyans at a police station in the past.

“After three days, the trio were put in a vehicle and sent towards Aberdares, over 150 km from the capital Nairobi,” Itumbi was quoted as saying in The Nation.

A report in The Nation stated that the Special Service Unit (SSU), a group that has been accused of extrajudicial killings, was behind the disappearance of Khan and Kidwai.

“Sometimes when our team was overwhelmed and we needed graphics, I sent (material) their way and they paused whatever they were doing and did me the favour,” he said in a Facebook post.

“They visited Mombasa, Homa Bay, (Masai) Mara, nyama choma joints and loved our dance joints too. They invited me to India; I told them I would visit after (the) elections. Their eyes were primarily on enjoying Kenya as much as they could. When they sat down, they produced very appealing content,” he added.

Khan, former COO of Balaji Telefilms, and his friend Kidwai went missing 90 days ago along with taxi driver Nicodemus Mwania, a local, from Mombasa Road in July.

A preliminary report handed over to the Inspector General of Police revealed that the three men were last seen when they visited a night club in Westlands, Nairobi, on the night of July 23.

Itumbi’s revelation comes against a backdrop of the disbandment of the Special Service Unit (SSU), a group that has been accused of extrajudicial killings.

A total of 21 detectives who served under the unit were summoned to the Internal Affairs Unit (IAU) headquarters in Nairobi on Friday.

The IAU handles complaints filed against police officers and recommends punishment for those who are found to have committed professional transgressions.

India has been in touch with the Kenyan authorities on the matter, the Ministry of External Affairs (MEA) said in New Delhi last week.