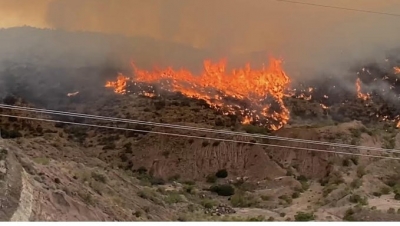 2 US firefighters killed while battling wildfire

Phoenix: Two firefighters were killed in the US state of Arizona while battling a wildfire which was ignited by lightning last week and has so far burned down 300 acres of land.

The firefighters were killed on Saturday in a plane crash while conducting aerial reconnaissance over the fire near the Prescott National Forest, the Bureau of Land Management (BLM) said in a statement.

“The accident occurred around noon today and involved an air attack aircraft performing aerial reconnaissance and command and control over the fire. Two crew members were on board and we are sad to report there were no survivors,” Xinhua news agency quoted interstate incident information system Inciweb as saying on Saturday.

The tragedy came as wildfires raged through the western regions of the US due to drought and high temperature.

In California, the Beckwourth Complex Fire, which occurred about 70 km north of Lake Tahoe, a famous vacation spot in the US, showed no signs of slowing down after doubling in size between Friday and Saturday and jumping the state border into Nevada.

The fire, which broke out on July 3, forced more evacuations from many small towns in California’s Lassen County, Plumas County and Nevada’s Washoe County.

The blaze also closed Highway 395 north of the junction with Highway 70 and cut off power to some residents for a period of time as the fire threatened Plumas Sierra Rural Electric transmission lines.

Hot and dry weather condition would continue through Tuesday, said the officials, predicting the fire “will continue to grow over the next five to six days,”