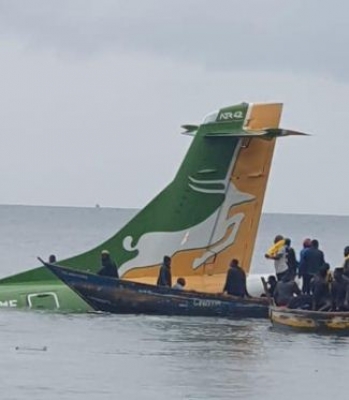 Twenty-six passengers have been rescued from a plane that crashed into Lake Victoria in Tanzania’s northwestern Kagera region on Sunday morning.

Dar Es Salaam: Twenty-six passengers have been rescued from a plane that crashed into Lake Victoria in Tanzania’s northwestern Kagera region on Sunday morning.

Chalamila said out of the 43 people on board the plane, 39 were passengers, two pilots and two cabin crew, adding that rescuers were still working to pull out 13 passengers still stuck in the fateful plane belonging to Precision Air, a private aviation company.

He said the rescued passengers had been rushed to hospitals, adding that authorities were still contacting pilots trapped inside the plane.

Chalamila said the plane crashed into Lake Victoria, the world’s second-largest freshwater lake shared by Tanzania, Kenya and Uganda, at about 8:20 a.m. local time (0520 GMT) as it approached the Bukoba airport.

“As we continue with rescue work, Kagera region authorities have informed the country’s top leaders, including the prime minister, about the plane accident,” he said.

President Samia Suluhu Hassan said she was shocked by the news of the accident.