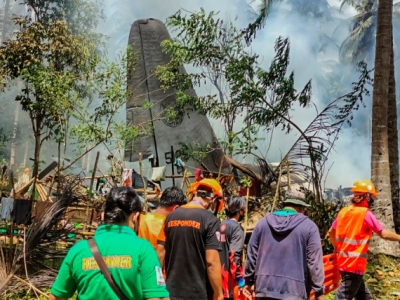 Manila: At least 29 people were killed and 17 others remain unaccounted for in the crash of a Philippine Air Force (PAF) C-130 Hercules transport plane in Sulu province, officers said.

As of Sunday evening, at least 50 injured personnel were being treated at a local hospital, Xinhua news agency reported.

“We remain to be hopeful that we could find more survivors. Our search and rescue are still ongoing,” he said.

The plane carrying army personnel crashed and burst into flames earlier on Sunday while attempting to land at the Jolo airport.

“The plane missed the runway and tried to regain power but failed,” said Armed Forces of the Philippine chief of staff General Cirilito Sobejana in a statement.

Defence Secretary Delfin Lorenzana said that more than 90 personnel were on board the plane, including three pilots and five crew.

The military said the plane was transporting “new privates of the Philippine Army who were en route to their deployment to end terrorism in Sulu”.

Minutes after the crash, troops and civilian volunteers rushed to the site for search and rescue.

“Per eyewitnesses, a number of soldiers were seen jumping out of the aircraft before it hit the ground, sparing them from the explosion caused by the crash,” the military said.

According to PAF documents, the crashed plane was a second hand C-130 Hercules recently purchased from the US military.

The PAF said in an official statement that the aircraft has a tail number “5125”.

Military documents showed that the aircraft arrived in the country in January this year.

The US officially turned over the plane during a ceremony in February.