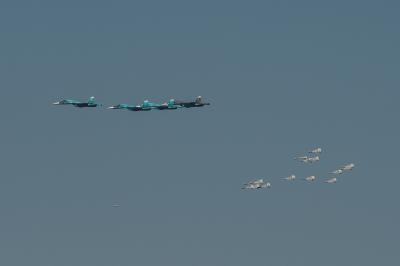 Moscow: Three people were killed and 19 others were injured after a Russian Su-34 fighter jet crashed in the city of Yeysk in Russia’s Krasnodar region, local state media reported.

The aircraft collapsed while it was gaining altitude during a training flight from an airfield of the Southern military district, and the pilots were able to safely eject before the crash, the state media reported on Monday, citing the Russian Defence Ministry.

The Su-34 crashed in the courtyard of a residential building, and the plane’s fuel ignited following the crash, the Ministry said as quoted by Xinhua news agency reported.

“The cause of the plane crash was the ignition of one of the engines during takeoff,” it added.

Fire engulfed several floors of the nine-story residential building where the aircraft crashed, and a total of 17 apartments were impacted. Ambulance crews were currently working at the site, according to Krasnodar region Governor Veniamin Kondratiev.