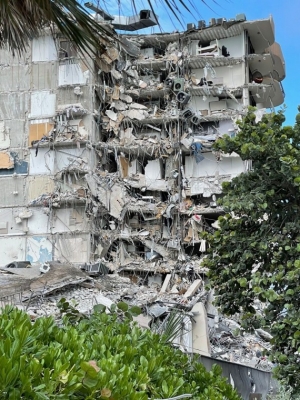 Washington: Another three bodies were found on Monday as search resumed after the demolition of remainder of the condominium which partially collapsed 12 days ago in Surfside, southeastern US state Florida, increasing the death toll to 27.

As many as 118 people are still unaccounted for, Miami-Dade County Mayor Daniella Levine Cava said at a news briefing.

Search efforts resumed around midnight after the demolition around 10:30 p.m. on Sunday in a process that “uses small, strategically placed explosives and relies on gravity to bring the building down in place,” the mayor said.

“Bringing the building down in a controlled manner was critical to expanding our scope of search,” Levine Cava said. “Truly, we could not continue without bringing this building down.”

The demolition allowed the crew to access the area closest to the building that they had not been able to access before, she said.

Florida Governor Ron DeSantis said on Friday that tropical storm Elsa’s expected arrival in South Florida this week has made the demolition of the whole building necessary, the Xinhua news agency reported.

The collapse occurred around 1:15 a.m. on June 24 at the Champlain Towers South condominium in the beachside town that sits around 9.6 km north of Miami Beach.

Since the collapse, multiple Miami-area buildings have been evacuated, according to a report.