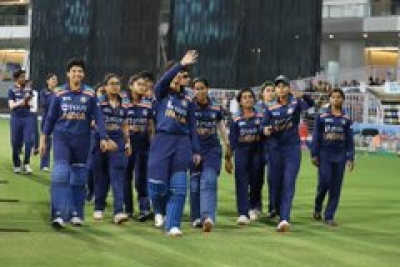 Lucknow: India’s left-arm spinner Rajeshwari Gayakwad on Tuesday strangulated the South African batswomen with a miserly spell in which she captured three wickets for only nine runs in four overs to set up a big, consolation nine-wicket win in the third and final T20 International here on Tuesday.

After Smriti won the toss and chose to bowl, she opened the bowling with pacer Arundhati Reddy and Rajeshwari. While Arundhati bagged just one wicket, Rajeshwari even bowled a maiden and finished with brilliant figures of 4-1-9-3.

The top scorer for South Africa was their captain Sune Luus, who scored 28 off 25 (3x4s).

In reply, Shafali and Smriti provided a solid start by scoring 96 runs for the opening wicket.

After Shafari got out, Smriti and Harleen Deol (4 not out) saw India through.

Perhaps, the South African women on Tuesday were not as motivated as they were in the first two matches, as they had already clinched the series by winning both games.