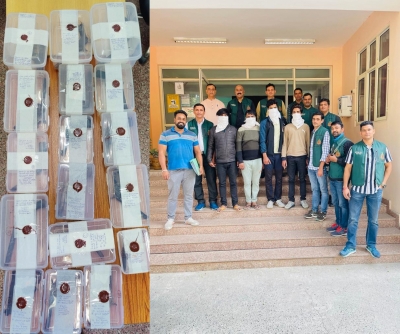 The Special Cell of the Delhi Police on Sunday said that they arrested four sharpshooters of slain gangster Jitender Gogi who were wanted in two dozen criminal cases, including murder and extortion.

New Delhi: The Special Cell of the Delhi Police on Sunday said that they arrested four sharpshooters of slain gangster Jitender Gogi who were wanted in two dozen criminal cases, including murder and extortion.

The accused were identified as Aman, Pradeep, Roshan and Ankit.

DCP Rajiv Ranjan Singh said that ACP Sanjay Dutt and his team had been working on a tip off about the four accused.

“On November 16, the tip off was received that Aman and Roshan, who were in possession of illegal arms and ammunition, would be coming to Bhikaji Cama Palace to carry out some criminal activities. A team was immediately sent to the area. Police found the other two accused were also there. The four, who came on separate two wheelers, were all arrested,” said DCP Ranjan.

During, interrogation, it was revealed that in July, Aman along with his associate Mukhtar had opened fire on one Kapil in the area Bindapur.

Kapil received several bullet wounds on his neck but survived. Aman had been absconding since.

There was enmity between Amn and Kapil as in April 2017, the latter and his associates had killed one Mustafa who was a very close friend of Aman’s and was the elder brother of Mukhtar.

While he was on the run, Aman along with Roshan and Ankit stole one two-wheeler to commit robberies.

The accused tried to snatch a gold chain of one Rakesh Verma in the Delhi Cantonment but failed.

The three also killed one Pankaj who was having an affair with Roshan’s wife.

During the interrogation it was also revealed that several times they opened fire on illegal bootleggers and gamblers and extorted money but case was not registered as nobody came forward to lodge a complaint.