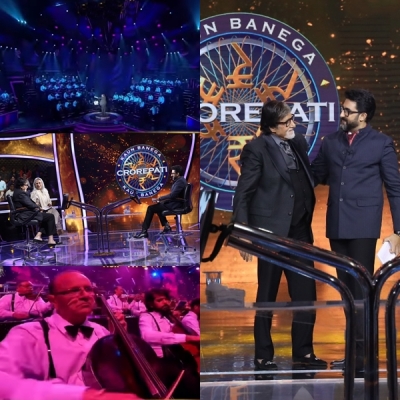 Mumbai: Megastar Amitabh Bachchan, who just turned 80, celebrated his birthday on the sets of ‘Kaun Banega Crorepati 14’ and was surprised by the reality show’s makers, with an 80-piece orchestra playing tunes from films such as ‘Don’, ‘Satte Pe Satta’ and ‘Kaalia’.

The special evening was attended by his wife and Rajya Sabha MP, Jaya Bachchan, and son Abhishek. Big B and Abhishek took over the hotseat and Jaya Bachchan hosted the show.

She asked her husband: “What do you like most?” Big B replied: “I like spending time with family and music.”

To this Jaya said: “In our family, we all are fond of music.” And then the orchestra played tunes of songs from a few of the Big B’s blockbusters.

Abhishek remembered his screen test for his debut film. The legendary actor visited the studio during the screen test to help Abhishek rehearse the lines from the movie.

An visibly emotional Big B said at the end of the show: “I would never forget this day.”