Home Agency News A decade after 172 deaths in Datia tragedy, no action taken by... 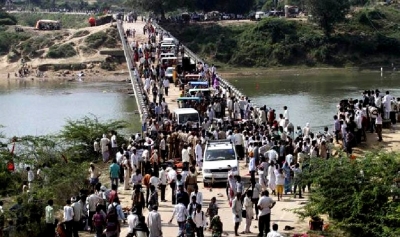 A decade after 172 deaths in Datia tragedy, no action taken by MP govt

In a similar tragic incident in Madhya Pradesh’s Datiya district in October 2006, 57 people were washed away when Sindh river got suddenly flooded after officials opened the gates of the nearby Madikheda dam without giving prior information.

As per reports, thousands of people had gathered to pray at a temple in Datiya when all of a sudden Sindh river got flooded, resulting in the collapse of a bridge built on it. As per the state government record, at least 57 people were washed away in that incident.

In an even more horrific incident at the same place in October 2013, as many as 115 people, including children and women, lost their lives in a stampede. Coincidentally, both the incidents occurred in October. The tragic incident in Morbi also took place in the month of October.

Both the mishaps took place during BJP rule, and the government of the time had constituted inquiry commissions headed by retired high court judges to probe the incidents.

However, in both these cases, neither the report of the commission was made public, nor any official was punished in what the locals called ‘state sanctioned murders’.

Interestingly, even after the Congress came to power in Madhya Pradesh in 2018, none of the officials were held accountable for the two incidents.

Sources told IANS that the state government-appointed committee for the 2006 incident had submitted its report to the Assembly, but the probe panel’s report was rejected by the ruling BJP.

“The Shivraj Singh Chouhan government had appointed Justice Rakesh Saxena, a retired judge of the Madhya Pradesh High Court, to probe the circumstances that led to the stampede in 2013 and identify the erring officials. Nine years have passed since then but no further action has been taken in the matter,” said Ajay Dube, a social activist who has been raising these issues for years.

Sources privy to the development told IANS that the probe panel led by Justice Saxena had submitted its findings to the state government sometime in March-April 2014. However, neither it was made public, nor presented in the state Assembly.

Dube said that he had filed an RTI query for the copy of the said report, but he failed to get the report due to the “sustained pressure” of the state government, which succeeded in holding it back.

Dubey said that had the state government taken timely action, the 2013 stampede could have been avoided.

“The task of such commissions is to identify and suggest what went wrong and what steps should be taken to avoid such incidents in the future. Had the erring officials been brought to book, they would have been more careful in 2013. However, now these are forgotten tragedies,” Dubey rued.