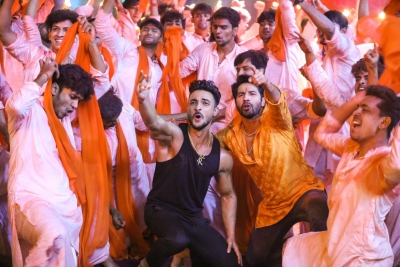 Mumbai: Actor Aayush Sharma who along with Varun Dhawan and Salman Khan appeared in the special Ganapati song ‘Vighnaharta’ as part of his upcoming film ‘Antim: The Final Truth’, recalls how tough it was for him to perform for the song as he got injured during the performance.

However, he mentioned it was all worth it when he looks at the final result in the video of the song.

The making-of video of the song has been released.

The video reveals the larger-than-life entry of Salman Khan, playing a cop in the film. What is more intriguing is that one can feel the devotion of the cast and the crew towards Ganpati while they were filming it. The making goes on to show how hard Varun Dhawan and Aayush have worked on the making of the track.

Recalling the experience of making the video, Aayush said, “I remember when we were performing before Ganesh idol, everybody took out their slippers because we actually felt a visarjan.”

Aayush had hurt his arm, which must have made the highly energetic dance steps a challenge to follow for him, but he mentioned, “I don’t know if I would be able to (perform), I was constantly icing my hand, after every shot. But I managed.”