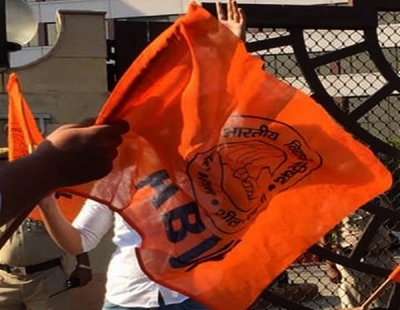 Patna: In a bid to promote the Akhil Bharatiya Vidyarthi Parishad (ABVP), unidentified men wrote a promotional caption on the wall of the official bunglow of Patna’s District Magistrate on Thursday.

The residence of District Magistrate Chandrashekhar Singh is located at the west side of Gandhi Maidan. The alleged persons also wrote ‘join ABVP’, ‘Vande Mataram’ and ‘Bharat Mata ki Jai’ on the wall.

When contacted, Singh told IANS: “We are probing the matter. It is a matter of defacement of government property. We will register an FIR in this connection. Recently, unknown persons also wrote similar advertisements on the wall of the DM’s office. We had filed an FIR in that connection.”

Chitranjan Gagan, state spokesperson of the Rashtriya Janata Dal, said: “Such an attempt is attributed to politicise bureaucrats in Bihar. It also shows the arrogance of the BJP which thinks that the government properties belong to it.”

However, Arvind Bhai, official spokesperson of the BJP, refused to comment on the matter.