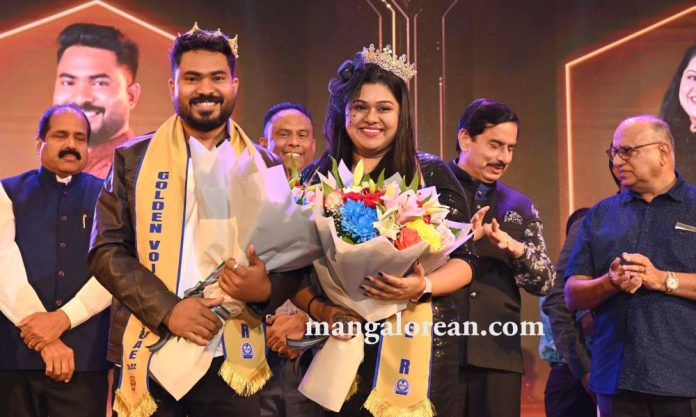 Dubai: The most awaited and sensational eve of Golden Voice of UAE 2k22 is concluded with grand success and 2 new star singers are introduced to the Konkani industry. Aenson Mathias Thottam and Valenteena Castelino Shirthady were chosen for the maiden crown of Golden Voice of UAE 2k22. The mesmerizing evening was presented by Mangalore Konkans Dubai at Emirates Theatre Dubai on November 6th 2022. 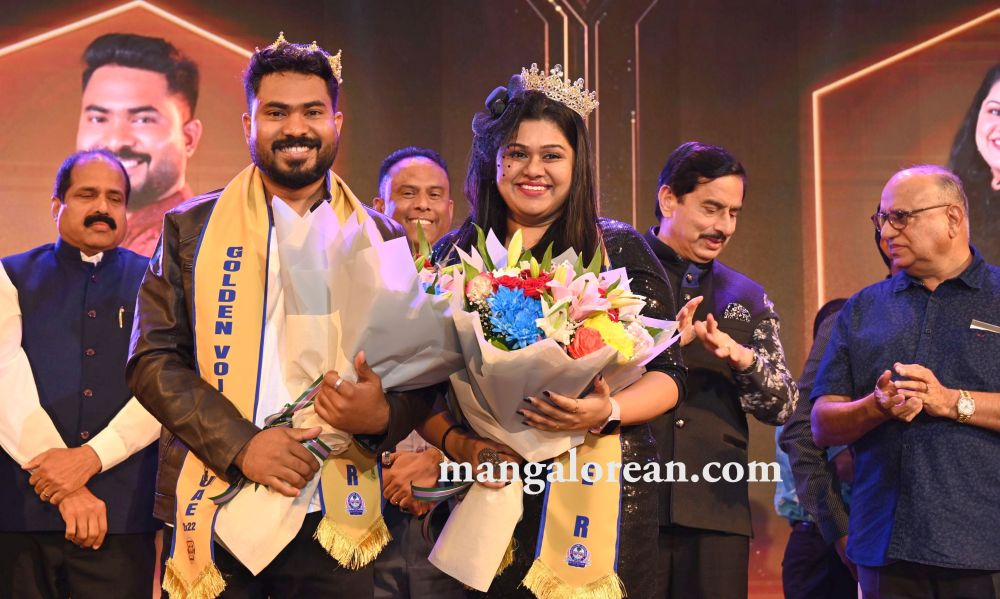 The event kickstarted with a grand procession of contestants, patrons, judges and inaugurators. Master of ceremony Floyd introduced the legacy of Mangalore Konkans crossed from the past 34 years and welcomed the gathering. 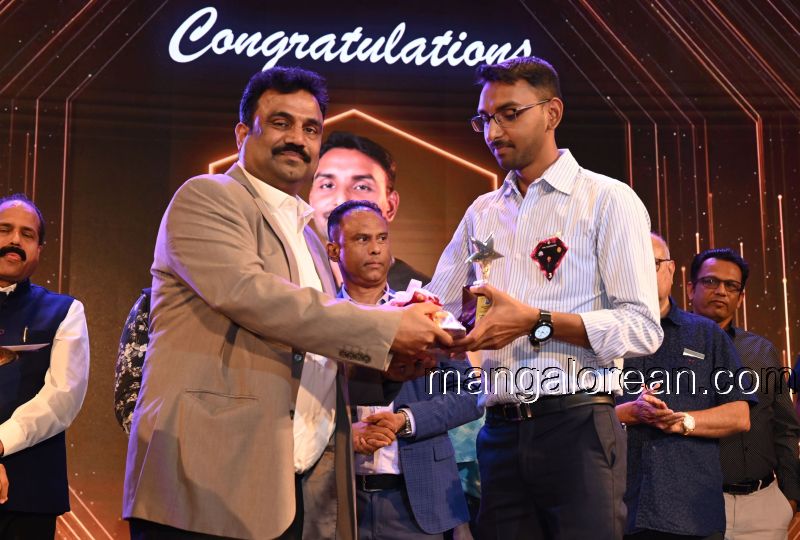 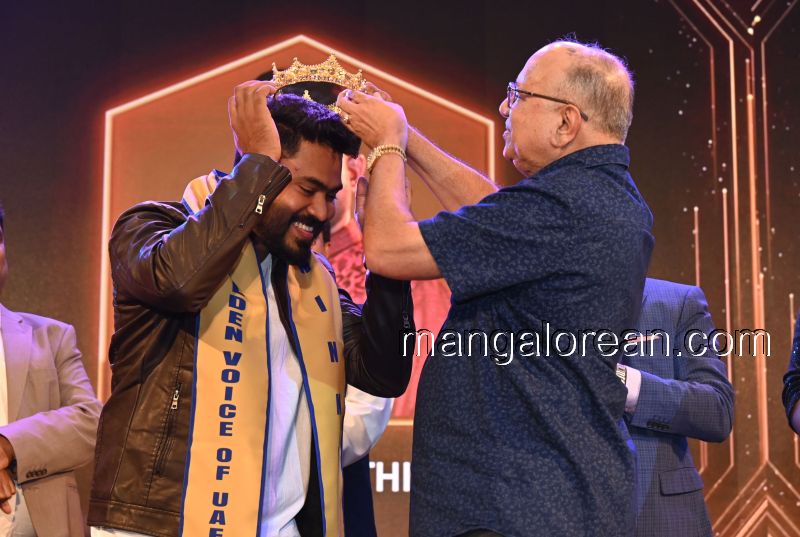 President of Mangalore Konkans James Mendonca honoured the sponsors with a sash and thanked them for their contribution to GVOUAE 2k22. 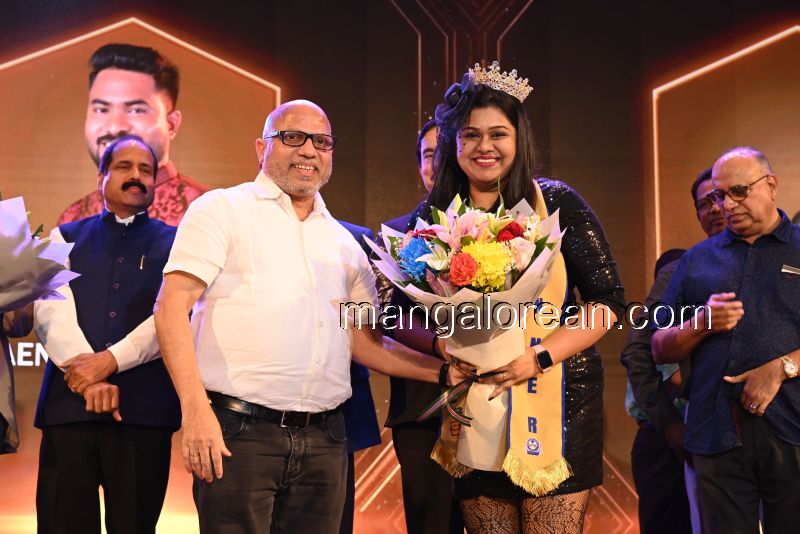 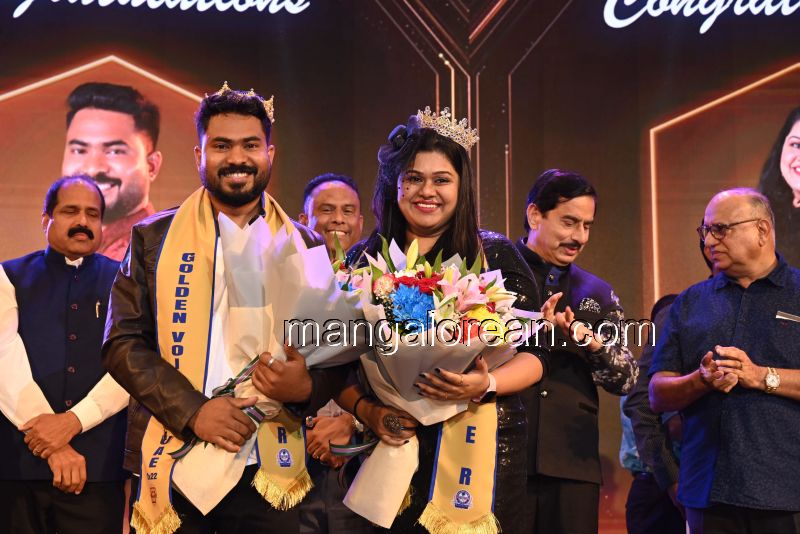 President James Mendonca honoured the patrons with sash and they inaugurated the program by beating the traditional Konkani musical instrument Gumta. James Mendonca welcomed all audience, constantans and sponsors and thanked everyone who supported hosting the show GVOUAE 2k22. 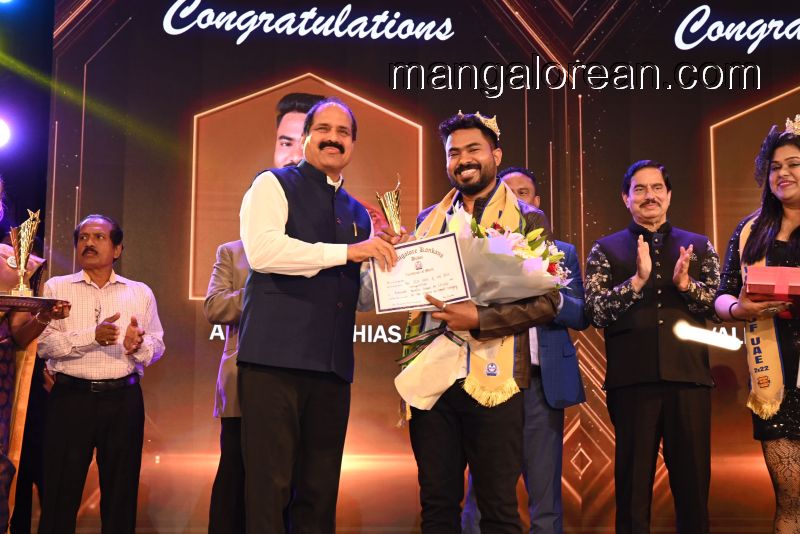 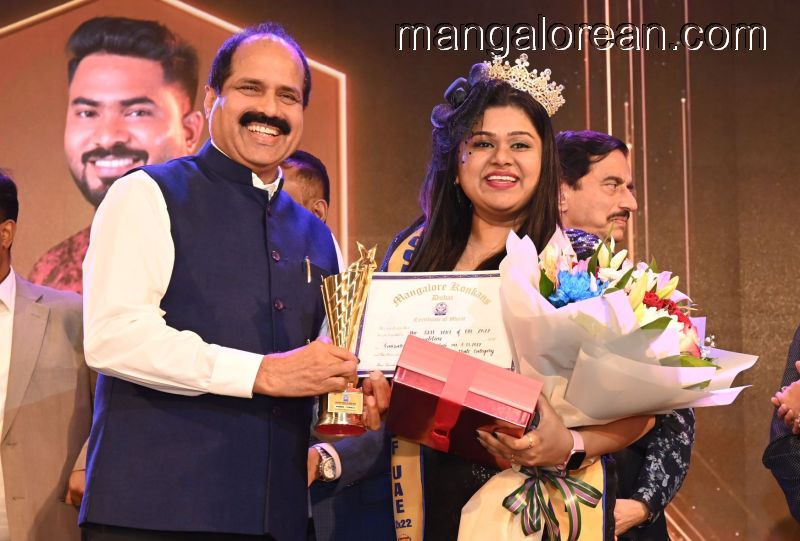 Its Show Time team presented the prayer dance and prayed the blessings on the show.

The competitions began with grand music by Band Ramiro led by ace musician Ramiro Mascarenhas and his team. Internationally acclaimed master of ceremony Roshan D’Silva took charge of the competition and presented the show in his unique way of presentation and witty comments.

The judges were introduced to the audience in a video presentation along with their brief profile and Marks counting committee head and MK member Melroy Pinto handed over the marks sheets to the judges. 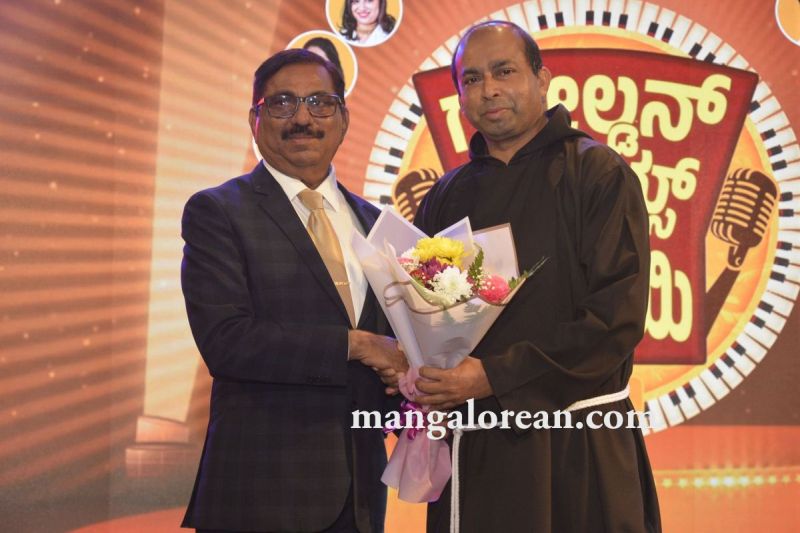 The program was framed with slow songs round, fast beats round and Goan songs round. In the first half, all 12 participants presented slow-round songs. Judges commented on the positive notes of the singing and also gave suggestions for improvisation. In the fast beats round, the twelve contestants presented the fast songs where the audience was pushed to tap their feats. 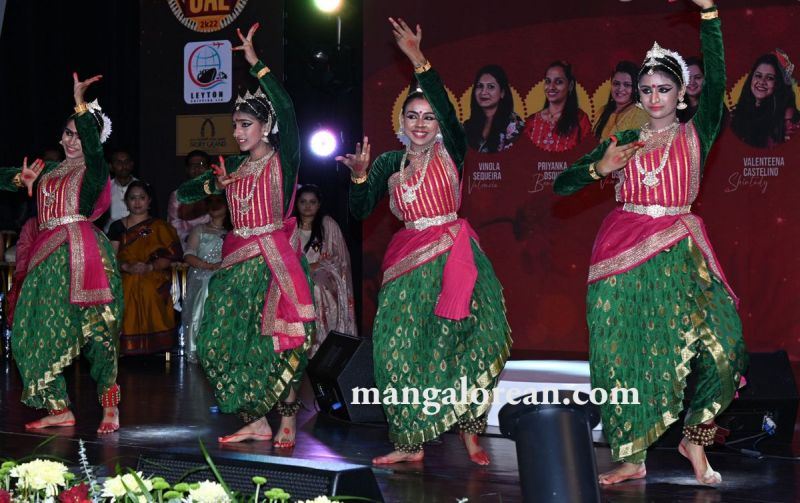 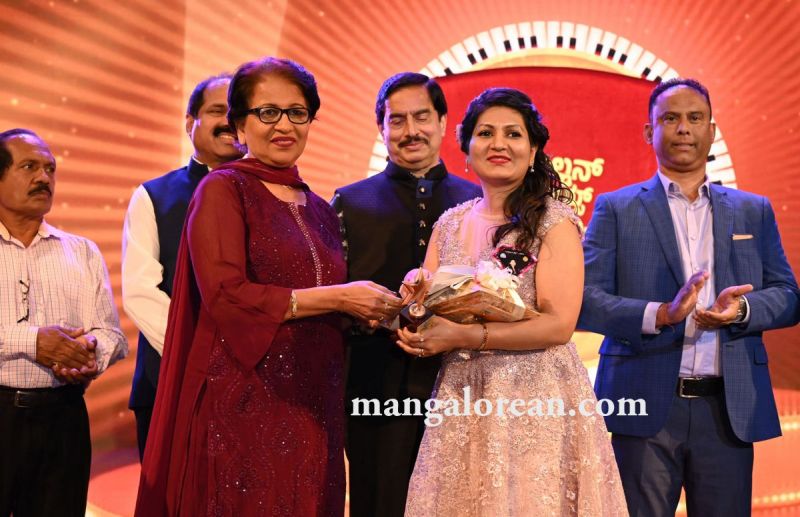 After the final presentation by six contestants, entertainment programs were planned whereas Sangon Mugdana Kalakar under the leadership of ace movie actor, director and drama artist Pradeep Barboza Paladka presented rib-tickling comedy skits and busted a laughter riot. Tru Entertainer led by Nishan presented mesmerizing dance performance which showcased the dance culture of Konkani. Its Show Time presented nine approved dances of India in a unique way. All these performers were honoured with mementoes and gifts.

Twelve contestants were honoured on behalf of Mangalore Konkans with mementoes. Priest of St Mary’s church Dubai and Konkani community Spiritual Director Rev. Fr. Victor Fernandes honoured the contestants. Also, the chief of Maestro Events Sujith, the designer of videos and banners Mr Merwyn, the leader of Band Ramiro, Ramiro Mascarenhas, photographers of the show, Ramcy Fernandes and Lovelyn D’Souza were also honoured for their service to the show. 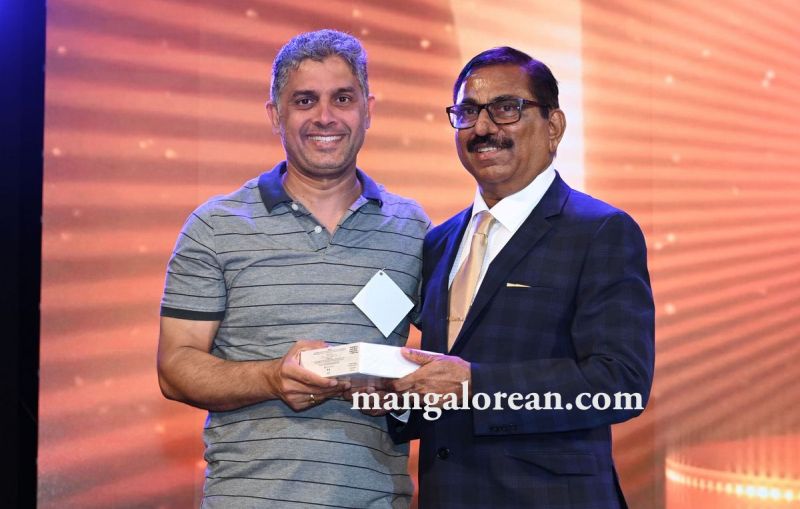 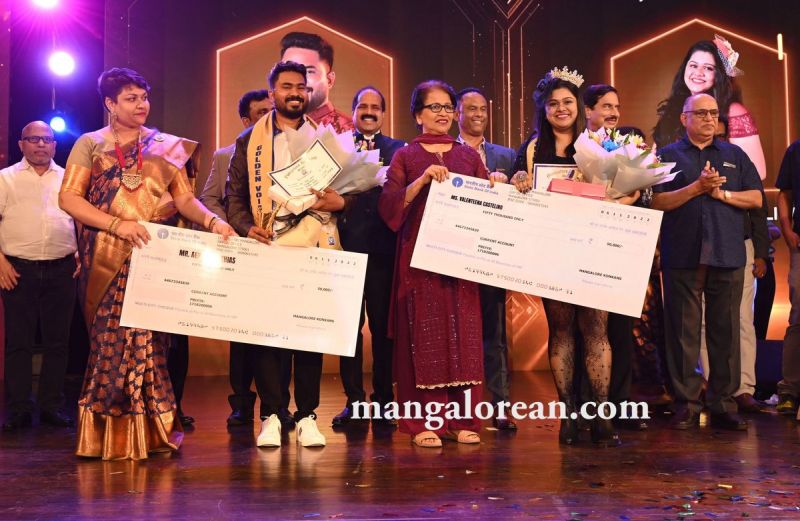 Ms Sharal Decosta and Mr Cletus Ostine received a symbol of distinction for having received the most YouTube views and likes respectively during the Golden Voice of UAE 2022 trip. Our adjudicator, Mr Charan Kumar, sang a well-known song, Panduranga, with Mr Joel Pereira on piano accompaniment as a request by Mr Charan Kumar. Another well-known song, Ello Ello Soro Pileyo, was also performed.

Fr. Victor and the president presented honours to all of the judges. A speech was delivered by Rev. Fr Reginald D’Souza at this moment. 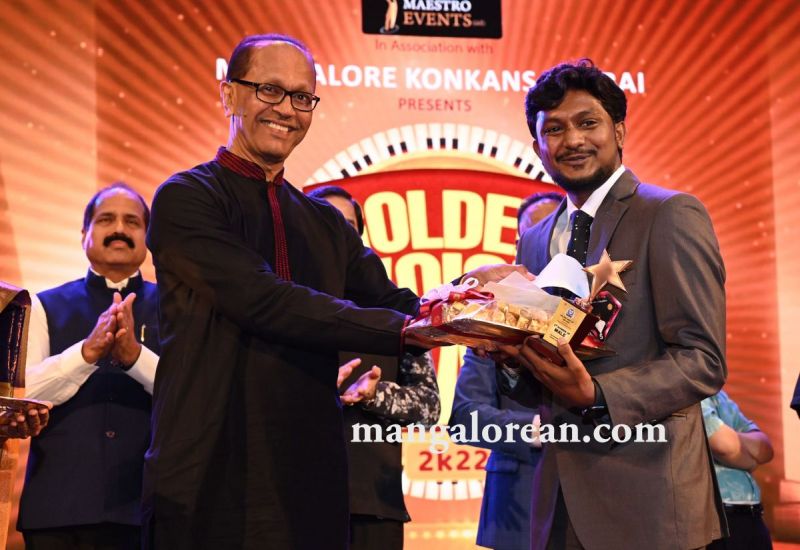 At last, during the results, Vinola Sequiera and Valen Sequeira secured the 2nd runner-up position of GVOUAE 2k22 and they were honoured with a trophy and INR 10,000.00 cash cheque and gift vouchers.

The 1st runner-up position was taken by Anil Rodrigues and Priyanka D’Souza. They were conferred with a trophy and INR 10,000.00 cash price and gift vouchers and hampers.

With loud cheers and a spectacular sight, the winning positions of Golden Voice of UAE 2k22 were conferred to Aenson Mathias and Valenteena Castelino in a grand manner. They were bestowed with GVOUAE 2k22 crown, Winner’s trophy, INR 50,000.00 cash cheque and gift hampers and vouchers.

The patrons and sponsors of the show were present on the stage along with President James Mendonca and honoured the winners with awards.

Roshan D’Silva thanked everyone and concluded the show.