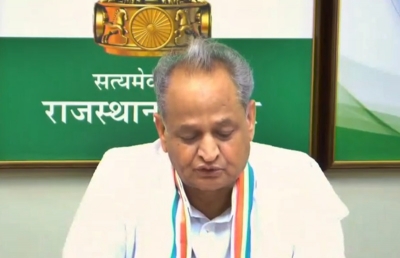 After Punjab drama, Raj CM’s OSD resigns over his tweet

Jaipur: A tweet by Rajasthan Chief Minister Ashok Gehlot’s OSD Lokesh Sharma, which was a jibe on the political developments in Punjab, has landed him in a soup due to which he had to resign.

Lokesh Sharma on Saturday night sent his resignation to the Chief Minister explaining the background of the tweet and said that it is up to the CM to accept it or reject it.

His tweet said, “Majboot ko Majboor, Mamooli ko Magroor kiya jaye, baad hi khet to khaye, us fasal to kaun bachaye. (When the strong is forced down and the minor is made to feel proud; when the fence eats the field, who will save that crop)”

Sharma in his tweet was seen questioning the Congress forcing Chief Minister Amarinder Singh to resign, and directly questioned the decision of the party High Command.

The tweet went viral and soon was discussed in the Delhi corridors too.

Looking at the situation escalating, and him being the Officer on Special Duty (OSD) to Rajasthan Chief Minister Ashok Gehlot, Sharma sent his resignation.

In his resignation, he expressed his apology and said, “I keep tweeting almost daily. I sincerely apologise if my tweet has hurt the sentiments of the party, government and high command in any way. My intentions, my words and my feelings were not meant to hurt anyone in any way and never will be.”