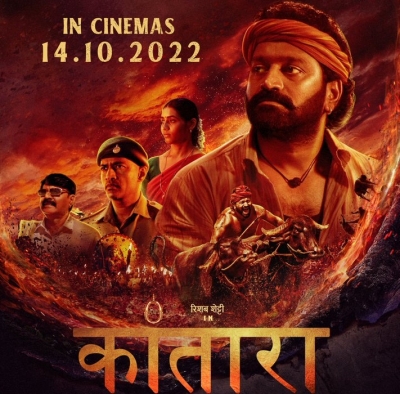 Bengaluru: After garnering rave reviews and box office success in the Kannada market with ‘Kantara’, the makers are eyeing the Hindi market.

The production house Hombale films took to their twitter handle today to announce the release of the movie’s trailer in Hindi version. The movie will be released in Hindi on October 14.

Speaking on the Hindi release of ‘Kantara’, the producer Vijay Kiragandur said: “Kantara is in a different genre from KGF. We wanted the world to see our distinct cultural identity that we are proud of. The movie spells of sacred customs and traditions, hidden treasures and generational secrets with the backdrop of uniquely rugged, charming landscapes of Coastal Karnataka. The distinct storyline of the movie is surely going to intrigue the fans nationally as well as globally. We have plans to release Kantara in different languages too in the coming week.”

The original Kannada version was released on September 30 and has made a mark at the box office as well as being critically acclaimed.

Set in the fictional village of Dakshina Kannada, Kantara is a visual grandeur that brings alive the traditional culture of Kambala and Bhoota Kola artform to the fore. The soul of the story is on human and nature conflict which is deeply rooted in the coastal culture and folklore of Karnataka.

The movie will be releasing onn 800 plus screens across India.

Directed and led by Rishab Shetty, the movie also stars Sapthami Gowda in the lead. It also stars Kishore, and Achyuth Kumar in pivotal roles. Kantara has been produced by Hombale Films who made the ‘KGF’ series.