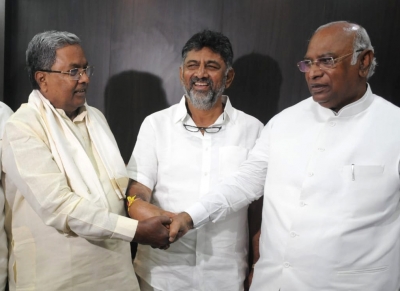 Bengaluru: Karnataka is looking ahead for the victory of veteran Congress leader and close confidante of Gandhi family Mallikarjun Kharge in the elections to the All India Congress Committee, which is being held for the first time in the history of the party.

Kharge missed the opportunity to become the chief minister of Karnataka in 2004, when JD (S)chose late senior leader Dharam Singh over him to head the coalition government.

He later moved on to national politics and went on to work as the opposition leader in Parliament. However, Kharge suffered a humiliating defeat on his home turf in Kalaburagi district against BJP candidate in 2019 parliamentary elections.

The veteran leader was elected to the Rajya Sabha later. Dalits and oppressed classes in the state have special place in their heart for Kharge and hope to see at the helm of affairs in the Congress, a party source said.

Insiders in Congress explain that if Kharge emerges victorious in the elections, it would have direct impact on state politics. The equations will also change.

Chief Minister Basavaraj Bommai and other senior leaders of BJP have already stated that Kharge, if elected, will end up becoming a remote control at the hands of in-charge AICC President Sonia Gandhi and Rahul Gandhi.

Rahul Gandhi has clarified that the statement is an insult to both veteran leaders. The developments regarding elections are not only keenly observed by the Congress party leaders, the oppressed and backward classes especially Dalits are closely following the AICC elections. They are hopeful that history will be created this time with Kharge taking charge as the Chairman of AICC.