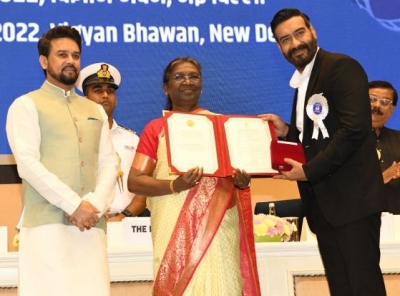 Mumbai: Bollywood star Ajay Devgn, who was feted with the award for Best Actor for his work in the 2020 film ‘Tanhaji: The Unsung Warrior’ on Monday, expressed his gratitude to the audience.

The actor took to his Twitter handle and posted a video of his various avatars from his films that have won National Awards from ‘Zakhm’, ‘The Legend of Bhagat Singh’ to the more recent ‘Tanhaji: The Unsung Warrior’.

The actor wrote in his tweet, “Not counting the wins or the blessings, just feeling grateful for all of it. Most importantly, your love. I share this win with all of you.”

“Honoured to receive my awards from the President of India, Smt. Droupadi Murmu,” the tweet further read.

‘Tanhaji: The Unsung Warrior’ is a historical-action film, which traces the life of Maratha warrior Tanaji Malusare.

It stars Ajay Devgn in the titular role along with his wife, Kajol, and his ‘Omkara’ co-star, Saif Ali Khan.

The National Film Awards ceremony took place at Delhi’s Vigyan Bhavan and the honours were conferred by the President Droupadi Murmu.