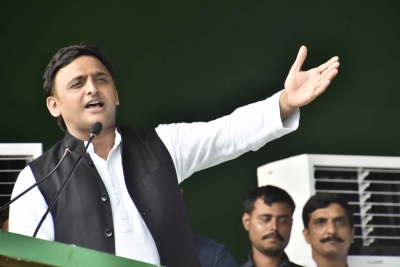 Akhilesh for quota on basis of caste population

Lucknow: Samajwadi Party (SP) president Akhilesh Yadav has advocated that reservation for all castes should be on the basis of their population.

Akhilesh Yadav, who is presently on a tour of Bundelkhand, told reporters: “The BJP government is trying to divide the other backward classes (OBCs) under backward and most backward categories. As per Chief Minister Yogi Adityanath, only one caste is getting the benefit of reservation.”

He did not elaborate the names of the castes.

Akhilesh further termed the BJP as a ‘party of liars’ and alleged that the BJP had changed names of projects launched by him, to claim credit for the same.

“This airstrip where I am standing was built when my father (Mulayam Singh Yadav) was the chief minister,” he said to prove his point.

Replying to a question on Covid vaccination, he said the government had no concrete plan about it and it should say clearly when the poor would get the vaccine.

He also came down heavily on the government on handling of the law and order. He said that women are unsafe and crime against them had increased.

Speaking on Badaun gangrape and murder, he said it would have met the Hathras fate had the medical report not disclosed the cruelty.

He further said the Samajwadi Party would form the next government in Uttar Pradesh and would enter into alliance with smaller parties.