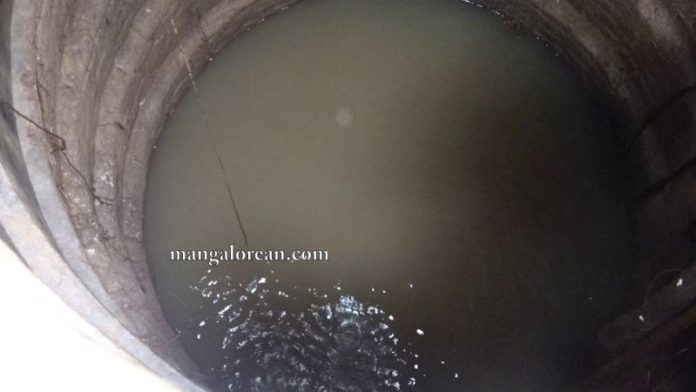 All’s WELL that Ends With a WELL? 4 Historic Wells found during Road Work in City to be Restored

Mangaluru: After three-decades-old wells were found in the City at various places, while digging work was going on during the road construction works, on Wednesday 7 July one more ancient well was found near the Dongerkerre Katte while digging work was going for the drainage project. With this, the total of historic wells found during road construction/drainage works goes up to four.

In October 2019, while the construction workers were digging for road concrete work, they discovered a sinkhole, a part of the dilapidated well near Bolar Leewell in the City. It was learnt that there used to be a well constructed by a British officer by the name of G Lee Morris, who served the region as Principal Collector in 1863 and 1864, near Bolar which later got the Lee-Well, in the 19th Century. It is learnt that this well provided water for nearly 50 families in that locality. But due to many suicides committed by people jumping into this well, Mangaluru City Municipality had closed it nearly 50 years ago. And after closing the well, a bus shelter was built next to it, which still exists. 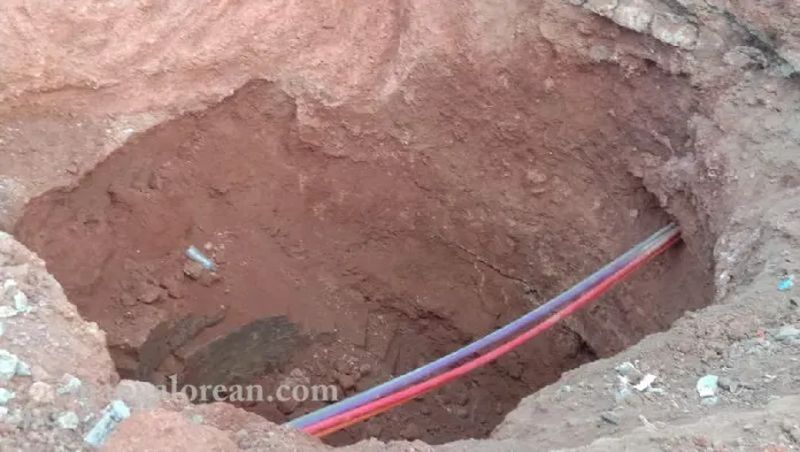 Even though there is not much history on this Lee-Well, but according to Mangaluru Darshana, a book on the Coastal Town’s socio-political cultural history, reveals that G Lee Morris had served in this region as Principal Collector in 1863 and 1864, but nothing is said about Him constructing the well. But going by his surname Lee, people assume that he could be the one who built the well. After the then MCC Commissioner Shanady Ajith Kumar Hegde had approached the Archaeology department as to what plan of action could be taken, and after 17 months this WELL dating back to the Colonial Era which was located near the Bolar Leewell Bus Shelter in the City, the archaeology department started the work in restoring the well at a cost of Rs 8 lakhs, the expenses undertaken by Mangaluru City Corporation, and the restoration work is complete. 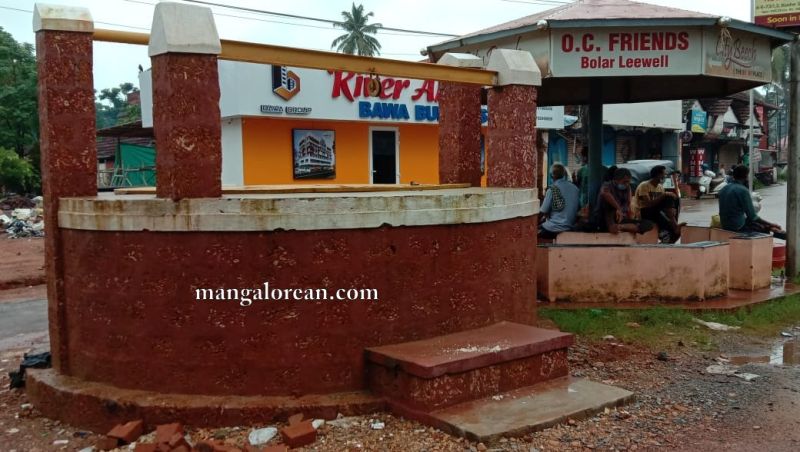 But many residents in the area are saying why even MCC gave first preference to this well, when there were roads nearby in bad shape for years, which should have been restored/reconstructed. The same money spent on this Bolar well could have been used to repair a few dilapidated roads and lanes in the City. Seems like Restoring Colonial Era Wells is Mangaluru City Corporation’s new Development Projects. (For more details about this Well, refer to this link: Why Even Spend Rs 8 Lakhs Restoring a British-Era Well near Bolar Leewell Bus Shelter…?

In September 2019, yet another century-old well was found when concreting work was going on at the Hampankatta Signal Lights Junction. The well has been restored now after MLA Vedavyas Kamath and former MCC Mayor Diwakar Pandeshwar took the initiative and wanted to make use of it for water supply to certain parts of the City. This WELL was discovered near the Auto-rickshaw park in front of Taj Mahal Restaurant, during the Mangaluru Smart City Limited (MSCL) road construction work which was going on near Hampankatta Circle. Even though citizens say that the water was safe for consumption, authorities had sent samples of this well water for testing. It is said that the well could be 100 feet deep, when the workers lifted the concrete slab, covering the well. On getting information of this well, MLA Vedavyas Kamath, Mangaluru City Corporation Mayor Diwakar Pandeshwar, along with a bevy of Corporators visited the spot and did some survey. 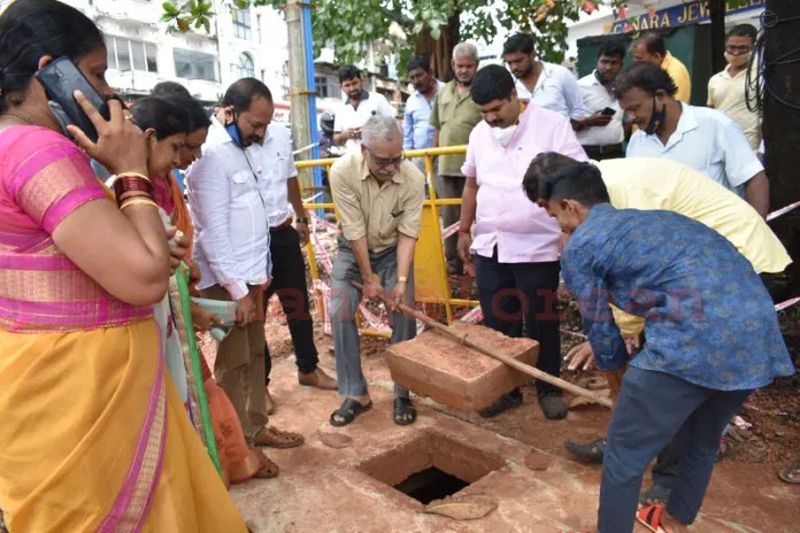 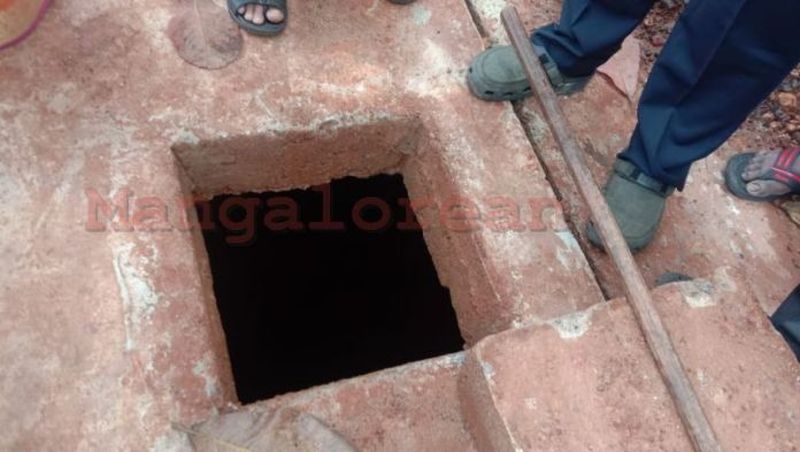 According to Dhananjaya Palke (Owner of Canara Jewellers, which is located right opposite to this well) who spoke to Team Mangalorean on that day had said, “This well has a history of over 120 years, as far as I know. Before 1905, there were no motor vehicles, and transportation was mainly by using bullock carts, horse carriages. During that time, a man by the name of Appanna, used to draw water from this well, and provide it along with a piece of jaggery, to bullock cart & horse carriage riders, and also the pedestrians/public. Appanna used to take a rest at a Katte (small platform/protective wall) nearby, and thus it was named after him, as Apannakatte”. 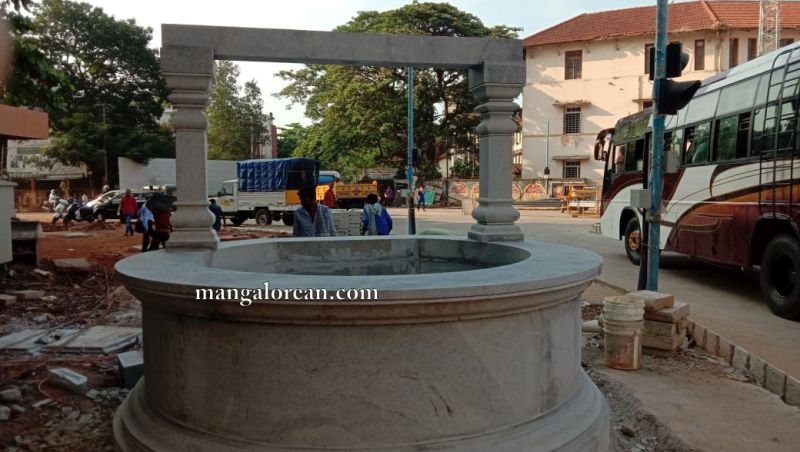 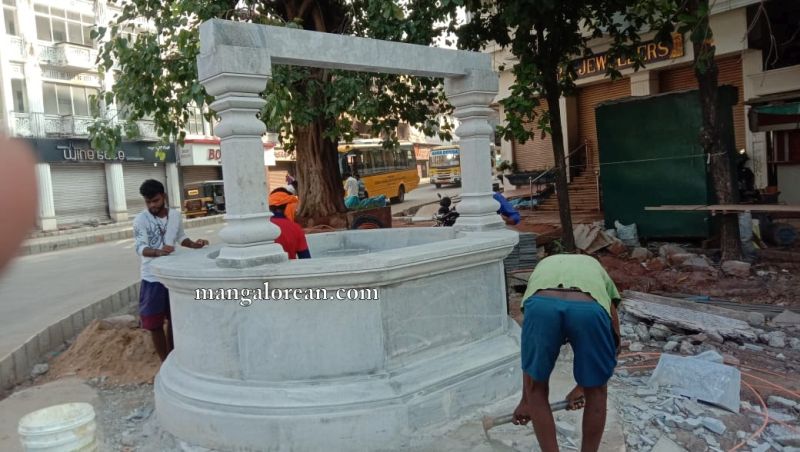 Palke further said, “In the years to come, the name was changed from “Appannakatte” to “Hampankatte” by the British authorities, in 1920. Till 1962, there was no municipal water supply, and this well was totally neglected. In the year 1962, former and First Prime Minister of India Jawaharlal Nehru had visited Mangaluru, and he was taken in an open jeep from the residence of Late Nayampalli Shiva Rao (presently the Shivabagh Bungalow, sitting atop on Shivabagh Road in City- where not only Nehru, even Mahatma Gandhi, Rabindranath Tagore, Chakravarthi Rajagopalachari, Governors of the times and many historic figures are said to have had stayed in this ancient Shiva Rao’s house) in a procession to Nehru Maidan”.

“And since this well, having three poles and supporting walls was in the middle and obstructing Nehru’s motorcade, it was decided to do some changes to the structure of the well. Therefore three months before Nehru’s visit to Mangaluru, three renowned figures of the Hampankatta area, (late Palke Babu) (founder of Canara Jewellers), (Late) Kudupi Srinivas Shenoy (founder of Taj Mahal Restaurant), and Late Ahmed Haji (owner of the building adjacent to Taj Mahal restaurant) requested Mangalore Municipal Councillor (Late) Manel Srinivas Nayak, to retain the well, but put a concrete slab with an open lid over the well, and it was done. Until May 1975, the fire brigade of Mangaluru used to pump water out of this well, and they also constructed a storage tank near to this well. A few days back, when I noticed the workers digging in that area, I cautioned them of the existing old well below and alerted them to work carefully. I also informed MLA Vedavyas Kamath, and other MCC officials, and they assured me to do the needful,” added Dhananjaya Palke. 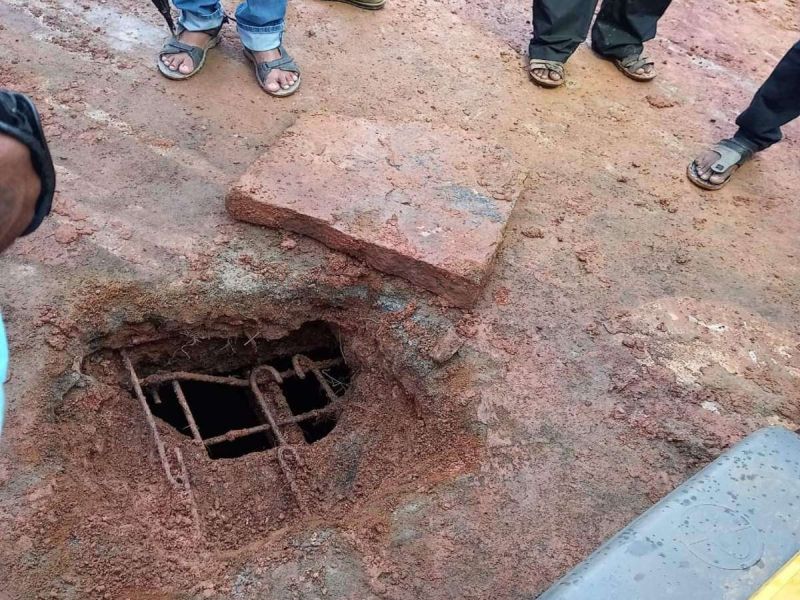 A decade-old well was found on 12 June 2021 during the demolition of Rashtrakavi Govinda Pai Circle in the city for redevelopment. In fact, the Mangaluru City Corporation (MCC) had demolished a landmark circle to build a new one near the PVS circle. MCC and Mangaluru Smart City Limited (MSCL) have planned to develop two roads adjoining the circle. Accordingly, the MCC dismantled the Rashtrakavi Govinda Pai Circle, formerly known as the Navbharat Circle. People saw an old well at the place where the cordon was. Mayor Premanand Shetty, who is also the director of MSCL, had said that the well is said to have been closed about 60 years ago. “We have already decided to widen Dongrakeri Road and Sharda Vidyalaya Road through MSCL. Similarly, footpaths will also be developed on both sides of all adjacent roads. Therefore, we removed the circle to facilitate these development tasks. A new circle will be drawn to align the newly developed roads,” said Shetty. 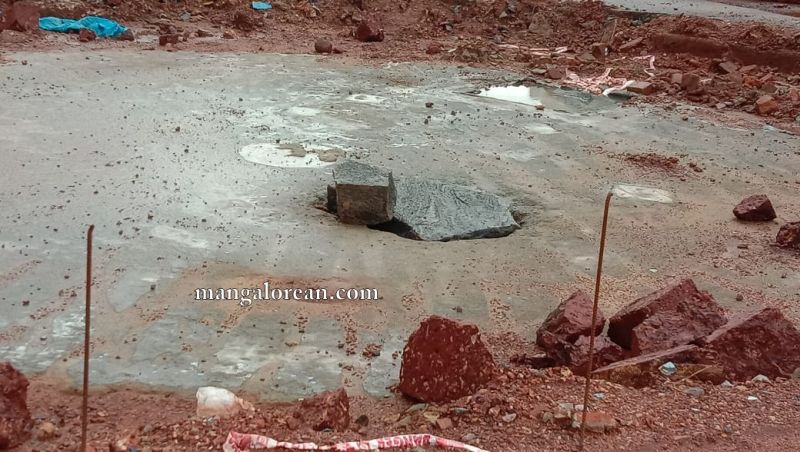 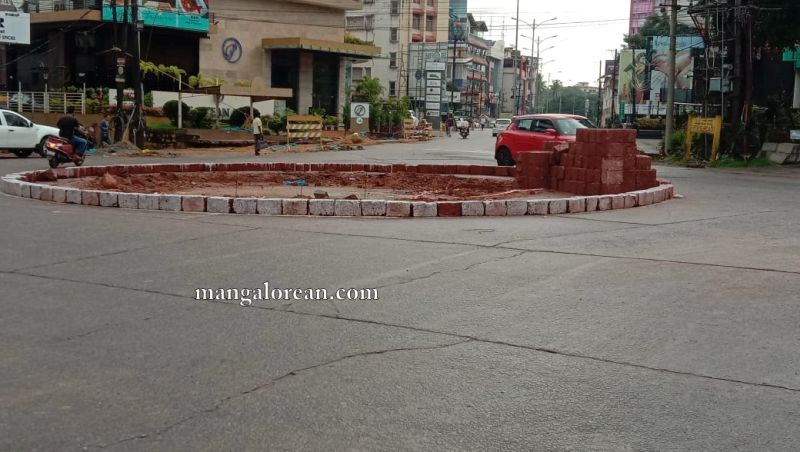 MCC officially named the circle Rashtrakavi Govind Pai Circle. Hence, the circle will be named as it is, and will be developed by Sevanjali Charitable Trust. The trust had submitted a request letter to the municipal corporation a few months back to develop and maintain the circle. He said the trust would submit a design and would start work soon after getting approval from the municipal corporation. On the old well found in the circle, Shetty said about 60 years ago when Vaman Kodiyalbail was the chairman of Mangaluru Municipality, it was closed to develop the road. “We plan to keep it as a monument by putting rings in the well,” Mayor had said.

On 7 July afternoon while the labourers were digging during an MSCL drainage/footpath project near Dongerekere Peepal Tree (Ashwatha) Katte near Canara High School-Dongerekere they found a well full of water up to the top, and they immediately informed the Mangaluru smart City Ltd officials and Mangaluru city corporation officials, including the Mayor-who quickly visited the spot and did an inspection. 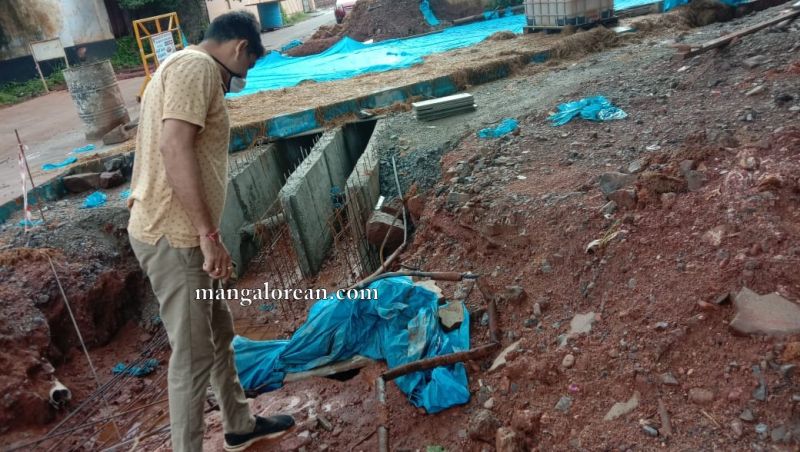 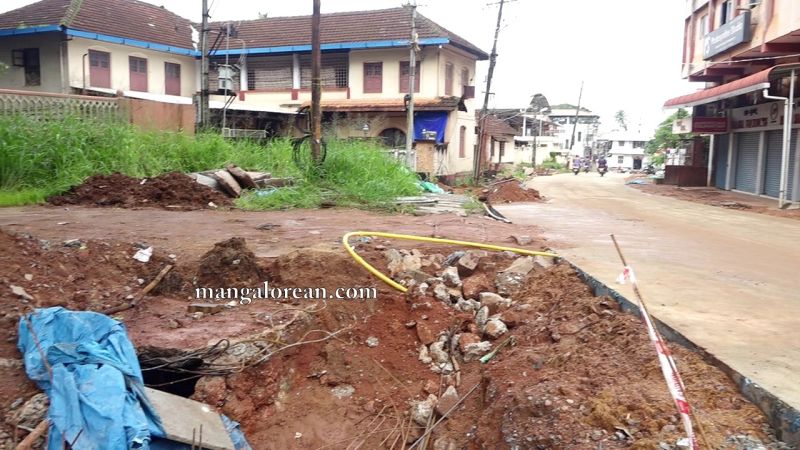 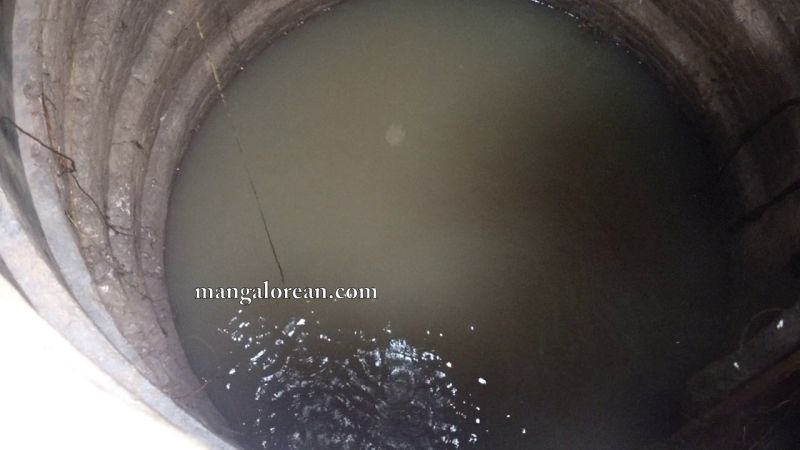 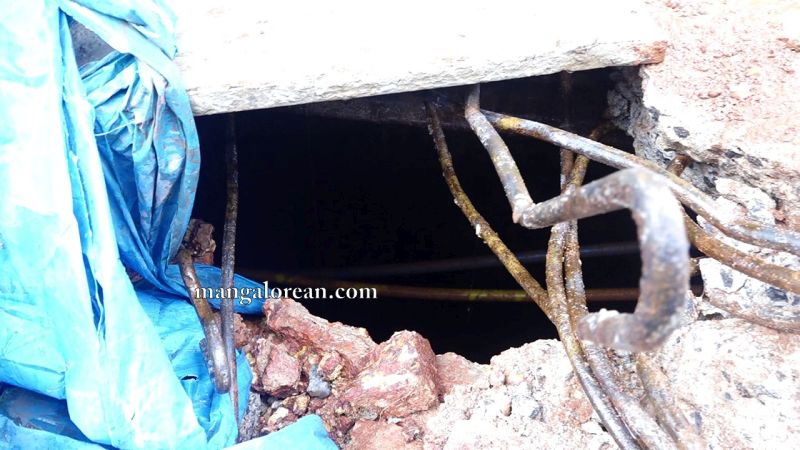 This morning (8 July) while MCC Mayor Premanand Shetty was on his morning walk noticing Yours Truly near the Dongerekere Well said, “This well could be around 50 feet deep, and we have found that the water is clean and could be used once testing is done soon. The Well is built with red stones and is quite strong. Only that the strong roots of a huge Peepal Tree (Ashwatha) nearby have pierced through the surrounding wall of the well, doing little damage. Work will go in restoring this ancient well, and it will be put into use once the project is complete”.