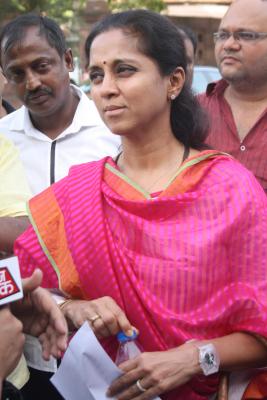 Sule tweeted: “Thank you so much Hon. Mrs. Sonia Gandhiji for your valuable guidance. It’s always such pleasure interacting with you”, following her late Wednesday interaction.

This is first-ever meeting of any leader of the NCP with Sonia Gandhi since the bribery allegation surfaced against Maharashtra Home Minister Anil Deshmukh.

The Maha Vikas Aghadi alliance will be meeting Governor Bhagat Singh Koshyari to show an united front in the face of mounting crisis the Uddhav Thackeray government is facing, Congress state President Nana Patole has tweeted.

“It’s the prerogrative of the CM whether to speak. How can the opposition force him to talk? When former Prime Minister Manmohan Singh did not speak, he was accused similarly, but now we have a talkative PM (Narendra Modi) and all are witnessing how he has destroyed the country,” Patole shot back.

Dismissing former Chief Minister Devendra Fadnavis’ contention that the MVA has become weak, Malik said the Shiv Sena-NCP-Congress government is very strong and despite all attempts, the BJP can’t unseat it.

The Bharatiya Janata Party (BJP), met Governor Bhagat Singh Koshyari on Wednesday and listed 100 points on which the ruling Maha Vikas Aghadi (MVA) government has allegedly failed to discharge its Constitutional duties, besides urging him to seek a report from Chief Minister Uddhav Thackeray.