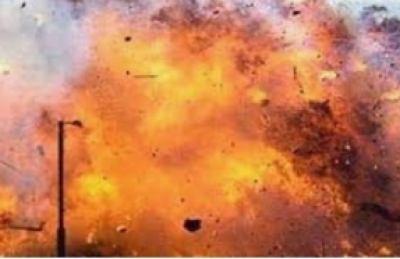 Amaravati: An explosion occurred on the premises of a police station in Andhra Pradesh’s Chittoor district on Saturday, police said.

The explosion took place when some explosive material stored in Gangadhara Nellore police station premises went off in the early hours of the day. A policeman sustained minor injuries.

The explosive material was seized in 2018 when it was being illegally transported by quarry operators in the region. The same was buried at the rear side of the police station building.

According to police, the seized material suddenly went off early Saturday morning. The loud explosion and fire created panic in the area.

A car and some two-wheelers seized in various cases were gutted in the fire. Doors and windows of the police station building and adjoining houses were also damaged in the incident.

Since there was no one around the storage site at the time of the explosion, there was no loss of life. One of the policemen present in the police station received minor injuries.

Senior police officials visited the police station. An officer said that a probe has been ordered into the cause of the blast.