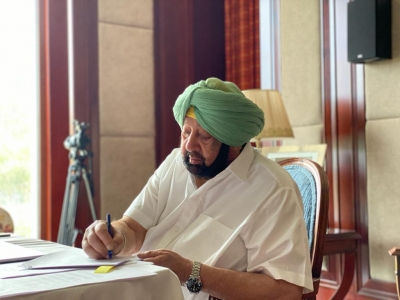 Anguished at political events, Amarinder wrote to Sonia before quitting

Chandigarh: Hours before he formally submitted his resignation to the Governor, Amarinder Singh had written to Congress interim President Sonia Gandhi, apprising her of his decision, while expressing anguish at the political events of the last about five months, which he said were clearly “not based on full understanding of the national imperatives of Punjab and its key concerns”.

“Notwithstanding my personal anguish, I hope this will not cause any damage to the hard-earned peace and development in the state, and that the efforts I have been focusing during the last few years, would continue unabated, ensuring justice to one and all,” Amarinder Singh had written in his letter to Sonia, indicating his apprehension of instability in Punjab as a result of the political developments in the state unit of the Congress.

At the same time, Amarinder Singh expressed his personal satisfaction at having done his best for the people as Chief Minister of Punjab, which, as a border state, “has many geo-political and other internal security concerns, which I tried to handle effectively without any compromise”.

He said he was happy that the state remained fully peaceful, and there was complete communal harmony with no ill-will towards anyone.

While she (Sonia) herself may be personally aware of some of the things achieved in the last four and a half years, “the people of Punjab are looking up to the Indian National Congress for its mature and effective public policies, which not only reflect upon good politics, but also address the concerns of the common man that are specific to this border state,” wrote Amarinder Singh, while informing the Congress President about his decision to demit the office of the Chief Minister, Punjab, after completing nine-and-half years as such from 2002 to 2007 and 2017 to September 2021.

In these nine and a half years, Amarinder Singh said he had worked wholeheartedly for the welfare of the people of Punjab — the state he loves from the core of his heart.

“This was extremely satisfying for me because not only I established the rule of law, and ensured transparent governance, but maintained ethical conduct even in management of political affairs, winning eight out of 13 seats in the Parliament elections in 2019 and the Panchayati Raj Institutions and urban local body elections decisively.”

Referring to the numerous challenges faced by him over the last four-and-half years in fulfilling the promises made by the Congress in the Punjab elections 2017, he pointed out that these notwithstanding, of the total promises made, his government had fulfilled 89.2 per cent, while work was in progress on the remaining commitments.

Citing the challenges posed by the pandemic Covid-19, he said his government faced the same in an effective and well-coordinated manner, ensuring minimum loss of public lives.

“The state is today nearly free from the pandemic, and persistent efforts are continuing not only to improve health infrastructure, but also to provide due care to the deserving people free of cost to prevent the much anticipated third wave,” he said, adding Punjab was fully geared to meet the future challenges.

“It gives me great satisfaction that Punjab is the only state, which has decided to provide universal health insurance cover at its own cost in keeping with our manifesto commitment. Nearly 55 lakh families are now eligible for free cashless treatment in the State,” he said.

On the issue of the sacrilege cases and the subsequent police action of 2015, Amarinder Singh said his government, which was committed to ensuring justice in the matter, had established a judicial commission of enquiry headed by Justice (retd) Ranjit Singh, whose report was received on August 16, 2018. The report was accepted and full legal action was taken thereon, he said, sharing details of the same.

He pointed out that despite legal hurdles and refusal of the CBI to return the cases, which were transferred to them by the SAD-BJP government, his government had succeeded in filing 10 challans, while 24 persons had been charge-sheeted, 15 police personnel suspended, and 10 civilians arrested.

“The criminal proceedings in these cases are currently underway and I am sure that in due course justice will be done in due course,” he said.

Referring to his personal promise to the people of Punjab to break the back of drug peddlers and smugglers in the state, he said he had done so relentlessly by establishing a special task force (STF) in this regard.