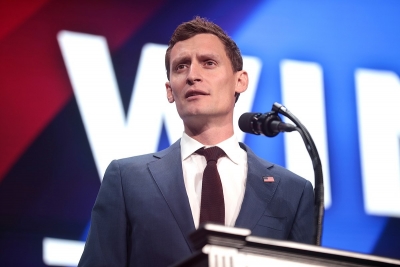 In another rout for former US President Donald Trump, one his chosen candidates has been defeated imperilling Republicans’ hopes of capturing the Senate.

New York: In another rout for former US President Donald Trump, one his chosen candidates has been defeated imperilling Republicans’ hopes of capturing the Senate.

The result announced on Friday night ties the two parties at 49 seats each in the 100-member Senate with two results still pending.

A ray hope still remained for the Republicans for the House of Representatives where they have a lead of 12 seats over the Democrats with 25 results yet to be announced for the 435-member body in which 218 seats are needed for a majority.

Of the two pending Senate results, Republican Adam Laxalt had a lead of just 821 votes or 0.1 per cent in Nevada over Democrat Catherine Cortez Masto, who holds the seat.

Trump got one bit of good news from the state on Friday night: His choice for Governor, Joe Lombardo, defeated Democrat Steve Sisolak by about 2 per cent.

In Georgia, Trump’s candidate Herschel Walker, a former football star, came just under 1 per cent behind Raphael Warnock, a Christian pastor on the Democrat ticket.

Although Warnock, who currently holds the seat, got more votes, he was 0.6 per cent short of the 50 per cent mark needed in that state to be declared the winner and a runoff election is scheduled for next month.

Republicans will need to win both seats for a Senate majority, and if they win just one of them, the chamber will continue to be tied with Vice President Kamala Harris wielding the tie-breaking vote.

Trump’s spoiler role was evident in Georgia, where the Republican Governor Brian Kemp, who had defied the former President and drawn his wrath, comfortably won reelection defeating the popular Democrat Stacy Abrams by nearly 300,000 votes, a margin of 7.6 per cent.

But Walker got about 200,000 fewer votes than fellow-Republican Kemp.

Besides Trump turning off some voters, Walker was a poor choice as he fought on a platform of banning abortions while two women alleged that he had paid for them to get abortions.

Now, the Walker campaign is seeking help from Kemp to face the runoff and it is not clear if Trump will stump for him, or will be asked to.

Trump had campaigned for Masters one of his acolytes who trumpeted his claim that the 2020 election was rigged and he was the rightful winner.

But, according to media reports, Trump had scolded him for not pushing the “stolen election” theory hard enough.

Masters waded into the conflicts within the Republican Party, blaming Mitch McConnell, the party’s leader in the Senate and a Trump target, saying he had not spent enough money to campaign for him.

A venture capitalist, Masters did not have a political base, a trait he shared with other Trump candidates like Mehmet Oz, a TV personality who lost the Pennsylvania Senate seat.

In New Hampshire, retired US Army Brigadier General Don Bolduc was another Trump protege to lose the Senate battle.