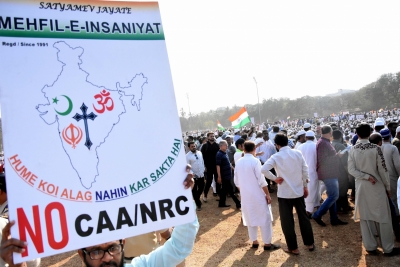 Anti-CAA protesters in UP to form political party

Lucknow: The anti-CAA and NRC protesters in Uttar Pradesh are now planning to form a political party that will raise their issues.

The proposed political party will be named Rashtriya Justice Party and efforts are on to bring protesters from every district on one platform.

This campaign is being spearheaded by former Bahujan Samaj Party MP, Iliyas Azmi, and steps have been initiated to get the new party registered at the Election Commission with a request for ‘tarazu’ (scales) as the election symbol.

According to Azmi, the anti-CAA (Citizenship Amendment Act) and NRC (National Register of Citizens) protests last year had gained mass support and those who participated in it, did not work on basis of their political affiliations.

“Our purpose is to ensure justice for the weaker and downtrodden sections of society, especially Dalits and Muslims. Several former legislators are also keen to join the new party. Several people who were a part of the protests, are now keen to contest elections,” he said.

These include Rajiv Yadav of Rihai Manch, Shahnawaz Alam of Congress and Sumaiya Rana who recently joined Samajwadi Party.

Azmi further said most of the political parties were concerned about vote bank politics but his new party would focus on issues.