Mangaluru: How many times might MLA U T Khader traveled on National Highway 66 on his way to his constituency in Ullal? While talking about safety hazards and health hazards, how many times might have MLA taken any action against this garbage menace? Also probably there could be many other ministers or politicians or educated people traveling on this stretch, and have turned a blind eye towards this dirty scene of waste scattered all along this highway. ? But sadly, none of our Netas, MLA’s and other state or district administration authorities have ever tried to resolve the basic problem. Seems all these politicians have turned a blind eye to this pathetic condition of garbage filled NH 66, especially near the Nethravati Bridge where it has become a dump yard. In the past, Team Mnagalorean has already done a couple of reports on this garbage menace on NH 66, and also near Nethravati Bridge. (Ref : Haven of Garbage! United Colors of Waste Decor NH66 from Yekkur to Kannur It is surprising to see the pathetic condition of this highway with garbage piled up at every 1/4 or 1/2 Km or so- and the best part is that, there is more garbage dumped where signs are posted “NOT TO DUMP GARBAGE”?. How ignorant and careless people could be towards Swachatha of India. The scenes of all these garbage piled areas will no doubt shatter the dreams of PM Narendra Modi’s “Swacch Bharath Abhiyan”. If the garbage spots start from Yekkur, they continue along the NH 66, or beyond, that I assume. Yes, it’s true that as the population increased, and also apartments/education institutions/hotels etc have increased, the quantity of waste also doubled but the concerned authorities have failed to find a place to dump garbage for the people living along the NH 66 and also those traveling on that highway. (Ref : Keralites from ‘God’s Own Country’ Dump their Garbage in ‘Rome of the East’-Mangaluru’! )

This stretch of highway gives an unusual view of garbage scattered all over the place. The road, which is a state highway shows the irresponsibility of representatives. You can see people tossing out garbage from the moving vehicles, and also residents and shops employees dumping garbage along the roadside, and stray dogs, including crows and birds feast on this garbage. Among the garbage, you could also find used syringes, cotton, medicine bottles/ used tablets wraps etc thrown by some hospital or hospitals in that vicinity. This ugly scene on the highway surely sends a bad image of India and also of the district to all the visitors from other countries who travel on this highway during their sight seeing tour. (Ref : Total Swachh Bharath Abuse! Truckers & Commuters make NH 66 a Private Dump Yard

Despite the hype around the cleanliness drive after Prime Minister’s clarion call for Swaccha Bharath Abhiyan, filth is still visible on this national highway, and on other highways. With the dumping of garbage on both sides of the national highway at various locations, many a time people using the road are put to inconvenience by the stench that emanates from the garbage dumped indiscriminately. In spite of awareness on why use of plastic should be avoided, people continue to use plastics. It forms a major chunk of the garbage dumped along the national highway. Even people have been dumping garbage from the Nethravathi Ullal bridge into the running river below, in spite of a sign posted nearby not to dump garbage.

In order to bring awareness and prevent people from discarding waste near and into the Nethravati River, Anti-Pollution Drive (APD) Foundation and HASIRU DALA- both NGO’s launched ‘Namma Netravathi, Namma Javabdari’ Campaign at Netravathi Bridge on Monday, 18th January and will continue until 23rd January 2021. This initiative is being supported by Mangaluru City Corporation and Ullal Nagara Sabha, ánd the campaign also aims to help reduce plastic pollution in the ocean. The campaign is spread over six days from 6 am to 9am. Large number of volunteers from different organizations, including students of SDM Law College, Mangaluru assembled today along the bridge at daybreak to create awareness among the people to desist from dumping waste into the river. 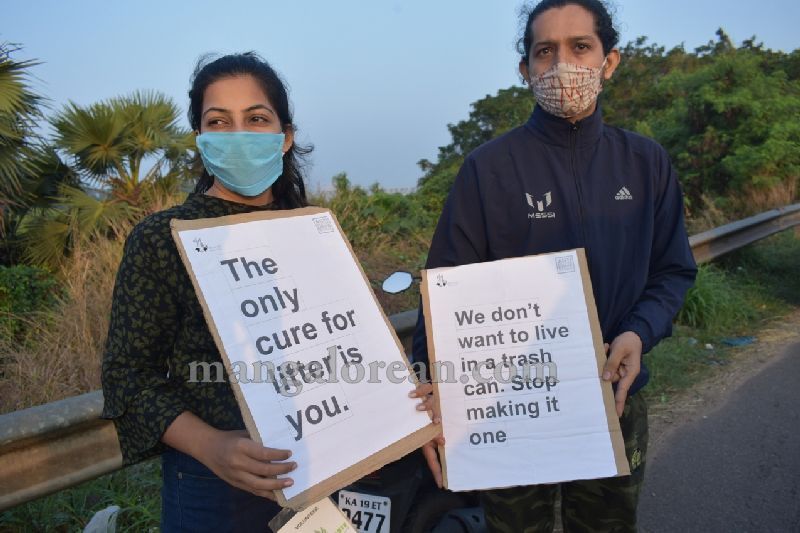 Many activities joined in forming a ‘human chain’, Rayappa, Commissioner of Ullal Nagara Sabha also participated in the campaign early this morning,and was kind enough to arrange a few workers from Ullal Nagara Sabha in cleaning up the garbage, and load it in the truck. But unfortunately, even though the Nethravati Bridge area falls under the Mangaluru City Corporation limits, none of the MCC officials were present during the launch of this campaign. This shows the care and responsibility of our MCC officials towards Swachh Mangaluru. It is learnt during the campaign days many other officials and people’s representatives are expected to participate- but seeing will be believing ?

Speaking to Team Mangalorean Abdullah A. Rehman, CEO and Founder of APD Foundation said, “APD Foundation and Hasiru Dala have already identified hotspots around Mangaluru where waste is entering the waters and where residents are indiscriminately disposing waste. The discarded waste includes household garbage, meat waste, fruit and vegetable waste from vendors and markets. The water pollution can easily be avoided if every stakeholder takes it as their own responsibility to protect Netravathi, the lifeline of Mangaluru. ‘Namma Netravathi, Namma Javabdari’ seeks to bring the citizens together and protect the Netravathi. “Netravathi River is the lifeline of Mangaluru city. Cooperation of every citizen is needed to keep it pollution free. It is very important that people stop throwing waste into the river. We urge all citizens to stop this unhealthy practice of throwing waste which will eventually reach the sea,”.

Nalini Shekar, co-founder of Hasiru Dala, said: “Water resources are precious for a community’s survival. As our consumption increases, the waste also increases and so does our responsibility for its appropriate disposal. Integrating and practicing sustainable living is the next step.” Yes, we agree that disposal of garbage continues to be a challenge faced by the civic authorities. Officials say that they alone can not keep the city clean. A change in attitude among people towards the issue of cleanliness is the need of the hour. In spite of many awareness programmes on ‘Swachh Bharath’ people have the habit of dumping garbage on the highways, streets and pavements. Adding to this, construction debris is also dumped. It’s time that our elected state representatives take quick action on this garbage menace on NH 66,especially near the Nethravati Bridge,( where the garbage thrown slowly enters into the river from the side) and start cleaning up soon. I hope this report will awaken some of our “Beloved?” leaders, including Ullal constituency MLA UT Khader, and the rest of the political and district administration/PWD/NHAI honchos to take action fast and do the needful. Netravati river is the lifeline of Mangaluru city. Co-operation of every citizen is required to keep it pollution free. While appreciating the efforts put in by APD Foundation and Hasiru Dala by taking up this campaign in order to save the Nethravati River from unwanted waste, people should also join in this campaign and see that the rae is litter free, and also help in being a volunteer during the campaign days.