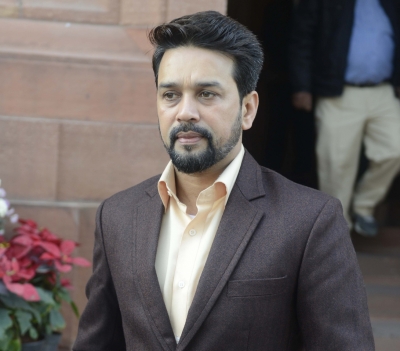 New Delhi: Amid the ongoing coup in the Aam Aadmi Party (AAP) unit of Himachal Pradesh, Union Minister Anurag Thakur is said to be instrumental and played an active role in diminishing the AAP’s poll prospects ahead of the Assembly election in the state.

As per sources, he has been actively facilitating the exodus of leaders in the opposition parties.

On April 8 midnight Himachal Pradesh AAP President Anup Kesari and other AAP leaders joined the BJP in presence of Nadda and Thakur.

A day before Delhi and Punjab Chief Ministers Arvind Kejriwal and Bhagwant Maan respectively, launched the AAP campaign in Himachal Pradesh by organising a ‘Tiranga Yatra’ in Mandi.

Hours before the midnight coup, Thakur played a magnificent innings of 47 not out leading MP XI against Delhi Police Commissioner XI at the Arun Jaitley stadium in the national capital.

MP XI led by the Union Minister lost the match but he scored a major political victory against Kejriwal’s AAP ahead of the year-end Himachal Pradesh Assembly polls.

After AAP’s yatra in Mandi, Thakur and other BJP leaders got active and executed the coup on April 8.

To everyone’s surprise, on Friday evening the Union Minister was playing a friendly cricket match at Arun Jaitley stadium in the national capital.

As the match ended he left the stadium before the prize distribution ceremony to ensure the induction of Himachal Pradesh AAP President into the BJP before the start of a four-day visit of the BJP Chief to the state, sources said.

A party insider said before the start of the match Thakur had placed everything in place and with the guidance of Nadda, ensured that it happened on the same day.

On Monday, when the BJP Chief was in Himachal Pradesh, the Union Minister staged another coup by ensuring the Himachal Pradesh AAP Women Wing Head, Mamata Thakur and other leaders joined the BJP in New Delhi.

Himachal Pradesh is the native state of both Nadda and Thakur.

By inducting the complete leadership of Himachal Pradesh AAP unit, Thakur and the BJP have dealt a major blow to the AAP National President’s plan to expand the party in a new state after the historic victory in Punjab.

“Just months before the Assembly polls, AAP has now no organisation and leadership in Himachal Pradesh. Building a new organisation within six month will be a challenging task for the Delhi Chief Minister Kejriwal. AAP has lost all ground it has made till now,” a senior BJP leader said.

Another BJP functionary said Thakur has used the resentment in the AAP cadre to stage the coup and it also shows his political maturity.

“Thakur is only focussed on ensuring return of BJP government in Himachal Pradesh and under guidance of top party leadership is executing plans to achieve it,” a party functionary said.