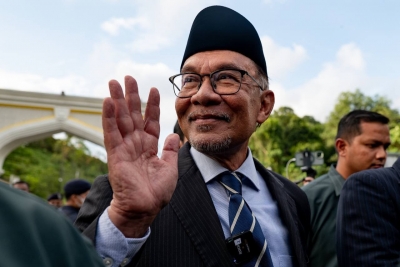 Anwar Ibrahim, the leader of Malaysia’s Pakatan Harapan (PH) coalition, has been named as the 10th Prime Minister of the country, the National Palace said on Thursday in a statement.

Kuala Lumpur: Anwar Ibrahim, the leader of Malaysia’s Pakatan Harapan (PH) coalition, has been named as the 10th Prime Minister of the country, the National Palace said on Thursday in a statement.

The swearing-in ceremony will be held at 5 p.m. (local time) at the Palace, Xinhua news agency quoted the statement as saying.

King Sultan Abdullah Sultan Ahmad Shah said in the statement that Anwar’s appointment was in line with the constitution, under which the king may appoint at his discretion any MP whom he believes to have majority support as a Prime Minister.

Members of the public are also reminded to remain calm and the king also advised the new prime minister not to inflict further political calamity on the people and to build a stable government.

All MPs are also reminded to stand in solidarity and give their commitment and make it a priority to serve the people.

Malaysia had been in a political stalemate following the indecisive results of a snap national polls on November 19, with no political coalition or party securing enough seats in the lower house of parliament to form a government on its own.

The king held several audiences with the heads of major political coalitions in a bid to break the stalemate and convened the conference of rulers to deliberate on the matter.

Following the meeting Anwar, whose PH coalition won the most seats in Saturday’s election with 82, was named as the Southeast Asian country’s new premier, allowing the formation of a new government.

The lower house of the parliament has 222 seats and the voting for one has been postponed due to the sudden death of a candidate.

Of the major political coalitions contesting the 221 seats, Perikatan Nasional won 73, Barisan Nasional 30, and GPS, the group of parties from the northern Borneo state of Sarawak, 23, according to the election commission of Malaysia.