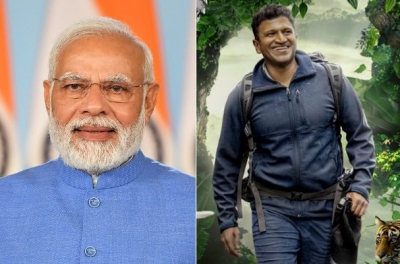 ‘Appu lives in the hearts of millions’, tweets PM Modi

Bengaluru: Late Kannada superstar Puneeth Rajkumar’s dream project ‘Gandhada Gudi’ is fast moving towards completion and the makers released the trailer on Sunday. The docu-drama is set to release on October 28.

The docu-drama helmed by Amoghavarsha, features the last big screen appearance of the late filmstar. Fondly known as Appu, Puneeth Rajkumar had died last year of a massive heart attack on October 29, 2021. He was 46 years old.

After unveiling the Gandhada Gudi trailer lasting around two minutes, Ashwini Puneeth Rajkumar tagged the Prime Minister and tweeted: “Namaste @narendramodi, Today is an emotional day for us as we are releasing the trailer of #GandhadaGudi, a project close to Appu’s heart. Appu always cherished the interactions with you & would have loved to share with you in person (sic).”

Responding to Puneeth’s wife’s tweet, PM Modi tweeted: “Appu lives in the hearts of millions around the world. He was brilliance personified, full of energy and blessed with unparalleled talent. #GandhadaGudi is a tribute to Mother Nature, Karnataka’s natural beauty and environmental conservation. My best wishes for this endeavour (sic).”