Bengaluru: Archbishop Peter Machado of Bengaluru called upon the fourteen deacons to strive for their goals as priests. Dr Machado while addressing the candidates for the priesthood in his homily during the Eucharist, emphasized three important points from the readings of the day. The archbishop spoke on eternity, slavery and friendship.

Archbishop Machado who is president of Karnataka Bishops’ Council said, “From all eternity God has destined you to be what you are today”, referring to Jer 1:5 and added, “Before I formed you in the womb I knew you before you were born, I set you apart; I appointed you as a prophet to the nations.” He reminded them that it is not their ability, intelligence or acumen that has brought them to the present situation, nor is that they chose to be a priest, but it is God’s plan that “You did not choose me, but I chose you and appointed you so that you might go and bear fruit” Jn 15:16. He explained at length God’s love, benevolence and compassion which are beyond human comprehension. He calls His chosen that “I no longer call you servants because a servant does not know his master’s business. Instead, I have called you friends” (Jn15:15). 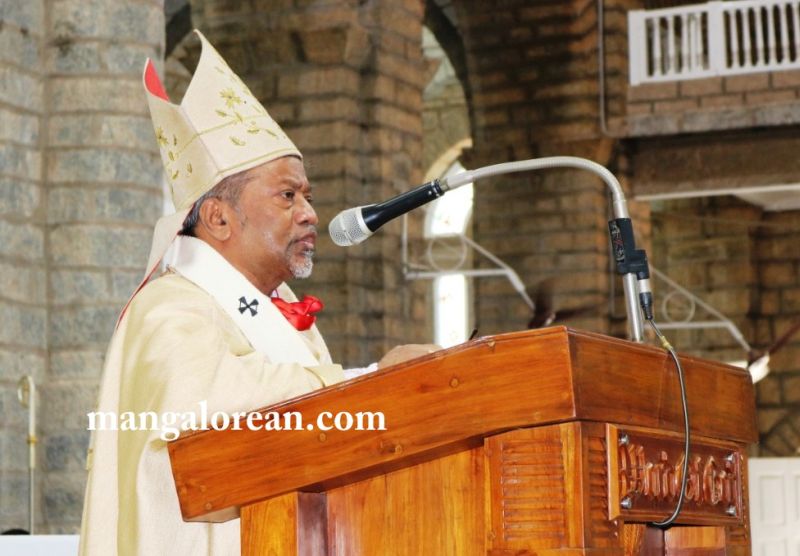 The Archbishop also spoke of the duties and responsibilities of the priests. He expressed concern for the Corona-affected, the untold suffering caused by the peculiar situation in which many lost jobs, scarcity of food has affected many and several have become poor. The Archbishop urged them to identify themselves with the poor and the suffering. He also made a mention of Fr Stan Swamy’s stand for the poor and his fight for the cause of the Adivasis”. 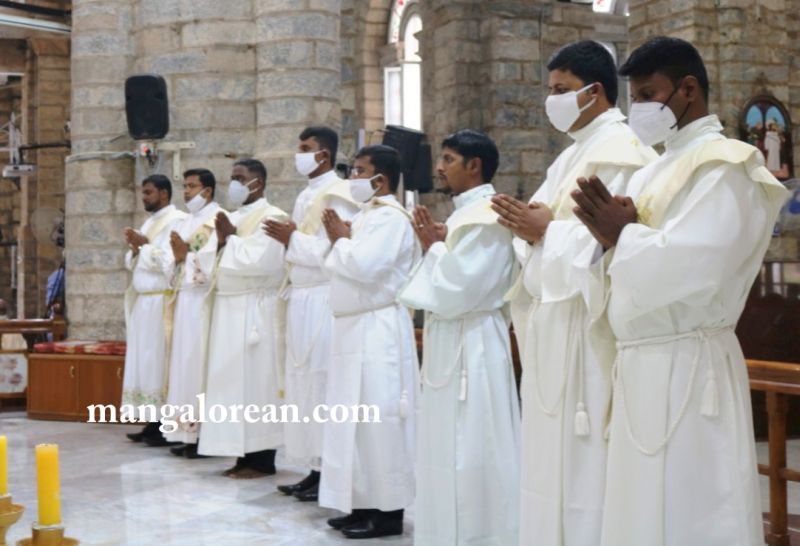 He exhorted them to be like servants and friends of the poor. Proclamation of the message of Jesus is to be given utmost priority. A priest is expected to give importance to pastoral work and to adjust to the given circumstances. Seek always the Will of God to seek His blessings and assistance in times of trouble. A priest is to serve the diocese, congregation and community. The Archbishop who is their Father exhorted them that they are to be special and should not be influenced by the attractions around. 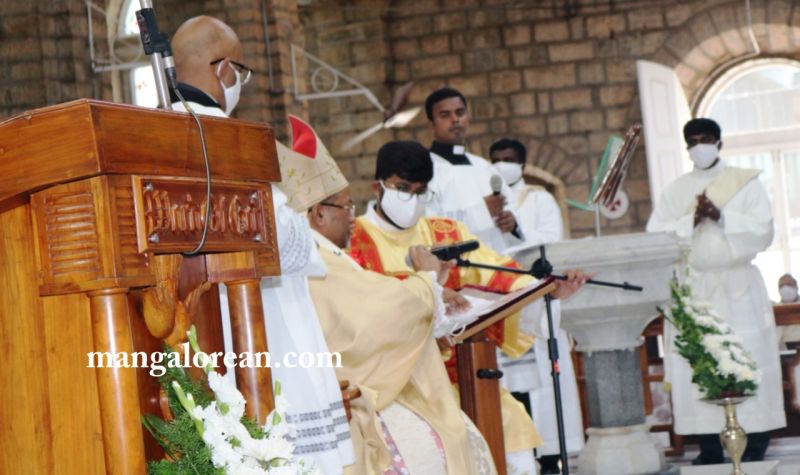 As the Church celebrated the feast of Our Lady of Mount Carmel, the entire Archdiocese had another reason to celebrate with great joy as the 14 Deacons of the Archdiocese of Bangalore were ordained as priests. Dr Peter Machado, Metropolitan Archbishop of Bangalore was the main celebrant. The Sacrament of Holy Orders took place at St Francis Xavier’s Cathedral. This is the second time the Archdiocese is blessed with such a vast number, the last being in 2011 when fourteen deacons were ordained.

The second wave of the pandemic was extremely violent and due to the restrictions imposed during the lockdown period, the Priestly Ordination, which was traditionally scheduled during the month of May every year, was delayed. However, the ordinands ended their wait as July 16 was the auspicious day for them to be anointed as priests by the Archbishop.

The restrictions of the Covid protocol are still on, the number of people attending the priestly ordination ceremony was limited to 100 people including the priests. After obtaining due permission from the concerned authorities, the solemn Holy Eucharist celebrations took place at the Cathedral. Archbishop Peter Machado presided over the Mass along with Vicars General Msgr. S. Jayanathan, Msgr. C. Francis and a few priests.

During the Holy Eucharist, the priestly candidates professed their allegiance and obedience to Archbishop and his successors, after which the Archbishop blessed them and anointed them with holy oils to the priesthood. 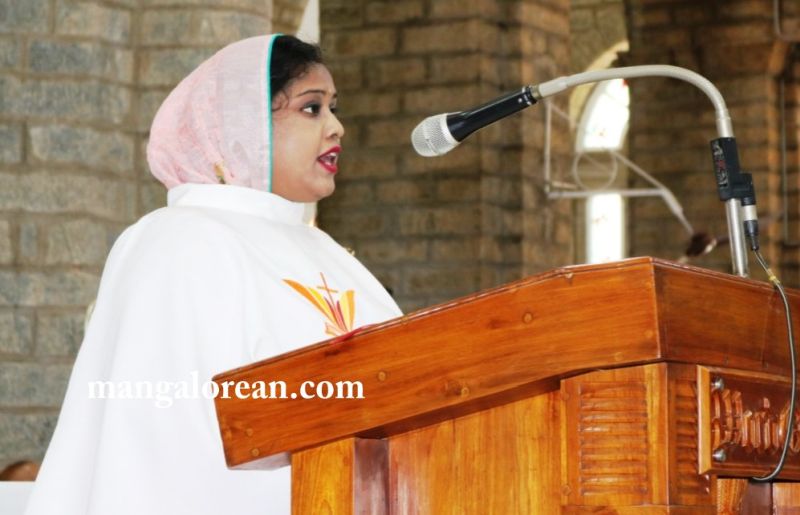 The Archbishop felicitated and thanked the parents and the family of the ordained priests inviting them to the Altar. Earlier, prior to the Ordination ceremony, Msgr C Francis called out the names of the candidates. Msgr S Jayanathan read out a kind of decree to state that no impediment to conducting the ceremony of ordination for all.

Ordination is the process by which individuals are consecrated. They are set apart and elevated to the clergy, who are authorized to perform various rites and ceremonies. Ordination is one of the seven sacraments and is called holy orders. The ordination ceremony had several stages. The bishop and all priests present laid hands on the deacons. This was to invoke the Holy Spirit to come down on the one to be ordained. This gives a sacred character and setting him apart for the designated ministry. The deacons were lying prostrate on the ground symbolizing his unworthiness for the office to be assumed and dependence on God and the prayers of the Christian community.

The deacons were presented with the stole and the chasuble. The stole symbolizes the authority and responsibility to serve in imitation of Christ. The chasuble is the main garment of the priest celebrating the Eucharist and is the outermost vestment.

Archbishop also anointed the hands of the deacons with oil. This indicated that someone is being set apart for a sacred task. This anointing makes them worthy to serve the Church of Jesus Christ. The Deacons were presented with a chalice and paten. This indicates bread and wine for the Sacrifice. The Eucharist is the heart and the essential part of the priesthood. This ritual highlights the importance of celebrating the Eucharist in the life of the priest. Bishop gives a kiss of peace. All the priests also do the same. The deacons hold the palms of the bishops, indicating obedience and submission to him and his successors.

Archbishop Emeritus Bernard Moras, who was their bishop for most of their formation period, greeted them and presented the deacons with a rosary and a card with a prayer to St. Joseph. Archbishop Machado felicitated the priests and their parents. Fr Britto, one of the newly ordained priests thanked the Archbishop, Archbishop emeritus Moras, VGs for their support and encouragement, Chancellors past and present, Parish Priests, formators, spiritual directors of different seminaries, benefactors, ministry guides, and several others who guided them throughout their journey. He thanked Fr Christopher Vimalraj, liturgy in charge, Fr Maria Louis, the Master of Ceremony, Fr Cyril Victor, Director, the Archdiocesan Communication Centre, and the choir. The lengthy two-and-a-half-hour ceremony came to a close officially with the final hymn by the choir.