Home Agency News Are HIV programmes missing the young who need them the most? 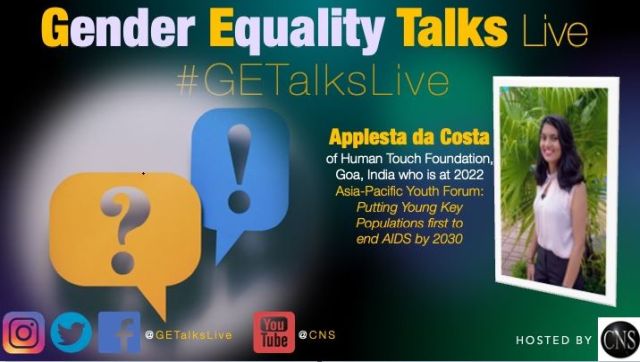 Are HIV programmes missing the young who need them the most?

More than one in every four new HIV infections in the Asia Pacific was in young people in the Asia Pacific region (in 2020). More worrying is that almost all of these new HIV infections in young people, were among the young key populations. The writing on the wall is clear: unless we scale up HIV programmes and increase programme effectiveness for the young key populations, we will fail to end AIDS by 2030.

Over 26% of new HIV infections in Asia and the Pacific region were in young people aged 15-24 years (in 2020), with young men almost twice as likely as young women to acquire HIV, said Applesta da Costa, a young psychologist from India who took part in the “Asia Pacific Youth Forum: Putting young key populations first to end AIDS by 2030” in Thailand. In some countries, over 45% of new HIV infections were among young people, said Applesta who is a part of the Human Touch Foundation team in Goa, India. Asia Pacific Youth Forum was co-hosted by Thailand’s Ministry of Public Health, the United Nations joint programme on HIV/AIDS (UNAIDS Asia Pacific), and other partners.

It is important to note that number of new HIV infections among key populations (young and older people among the key populations) has been very high compared to the general population. “HIV prevalence in key populations in India is 6 to 13 times higher than the prevalence in the general population in India (0.22%). HIV prevalence among persons who inject drugs is 6.26%, 3.14% among the transgender community (including Hijra), 2.69% among gay men and other men who have sex with men, 2.10% among prison inmates, and 1.56% among female sex workers. If we are to progress towards ending AIDS, we have to strengthen HIV prevention, treatment, care and support services for the key populations on priority,” said Dr Ishwar Gilada, who represents the Asia Pacific region at the Governing Council of International AIDS Society (IAS), and is the President of AIDS Society of India (ASI).

HIV prevention must not slip off the radar

“We really need to find out what are we lacking [in the HIV programme], why are we still falling behind? Why are the new HIV infections not declining steeply, especially in the young key populations?” rightly questions Applesta.

Applesta said that legal and policy coherence is vital to achieve across the region to progress on public health and other sustainable development agenda.

“We are aware that adolescents as young as 13 or 14 years may be sexually active,” said Applesta. But if they wish to get an HIV test then they need their parent or legal guardian’s consent in India. “Lot of young people do not want to go for an HIV test because they do not want to be judged by their parents or legal guardians. Also, there are prejudices related to being sexually active as well.”

There are punitive laws. For instance, those young people who inject drugs may be reluctant to access harm-reduction-related health services.

We need legal and policy harmonization so that everyone including the young can access the full spectrum of HIV services everywhere, especially those who are at a greater risk.

Legal requirements to show government identity cards for accessing a range of HIV-related services may deter some young key populations from accessing care. Applesta also points out that most HIV services are available during the time when young people may be in school or college or at workplaces. We need HIV services to be available at a time convenient or preferable for those most in need.

HIV-related stigma continues to be a barrier to accessing healthcare services. Key populations face compounded stigma and discrimination. “If a healthcare centre is not youth-friendly and not a safe space for the young key populations, then we will not be able to serve most in need as they may be reluctant to opt-in for services,” said Applesta.

Self-stigma or shame is another obstacle which impacts self-acceptance, self-perception, self-efficacy, self-esteem and self-confidence. Self-stigma often results when self-issues interact with external causes (such as discrimination or violence in family, school, social or work settings), resulting in depression, low self-esteem, anger and self-harm, and even suicidal intent.

Self-stigma contributes to ‘bridging behaviours’ – such as injecting drug use – that can increase a young person’s sexual risk-taking. Self-stigma appears to decrease condom use, as the need to feel love or affection outweighs the long-term health consequences of unprotected sex. Also, those who have low self-esteem are less likely to have the power dynamics to negotiate condom use with their partner.

Applesta underlined the need to pay more attention to mental health. She stressed upon strengthening HIV prevention services with a full range of HIV prevention tools and approaches available and accessible to the young key populations. Pre-Exposure Prophylaxis (PrEP) is yet to be made available widely in India. Post-Exposure Prophylaxis also needs to be made more widely accessible.

Comprehensive sex education is another missing or weak cog-in-the-wheel in India’s education system. Also, we need approaches that reach out to the young who are not enrolled in the formal education system so that they can benefit from comprehensive sex education, as well as other health and social welfare services. “Then they will be able to take more informed decisions which will help them in not putting themselves in a vulnerable position,” said Applesta.

She called for making HIV self-testing widely available and accessible in India. As per recent news, in recognition of growing scientific evidence in favour of HIV self-testing, it is likely to be introduced in India by end of this year.

Engaging young people, especially those from key populations, is vital to find solutions and approaches that work best for them.

HIV rates have declined but not steeply enough

Some countries in the Asia Pacific region have made strong gains against their HIV epidemics. Thailand and Viet Nam have reduced their annual numbers of new HIV infections by at least 50% since 2010. These declines were achieved mainly with prevention programmes focused on people from key populations.

New HIV infections in the region overall, however, declined by only 21% between 2010 and 2020. But it has increased in some countries in the same period: 36% increase in Papua New Guinea, 84% in Pakistan and 237% in the Philippines. New HIV infections also increased during 2010-2020 in Afghanistan, Fiji, Malaysia, and Timor-Leste.

Across the region, new HIV infections among young people declined by 32% between 2010 and 2020.

With only 98 months left to end AIDS by 2030, we have to ensure that new HIV infection rates decline much more sharply – and – putting young key populations first is one of the essential components to accelerate progress towards the #endAIDS goals.

(Bobby Ramakant is part of the editorial of CNS (Citizen News Service) and a World Health Organization (WHO) Director General’s WNTD Awardee. Follow him on twitter @BobbyRamakant or visit www.bit.ly/BobbyRamakant)