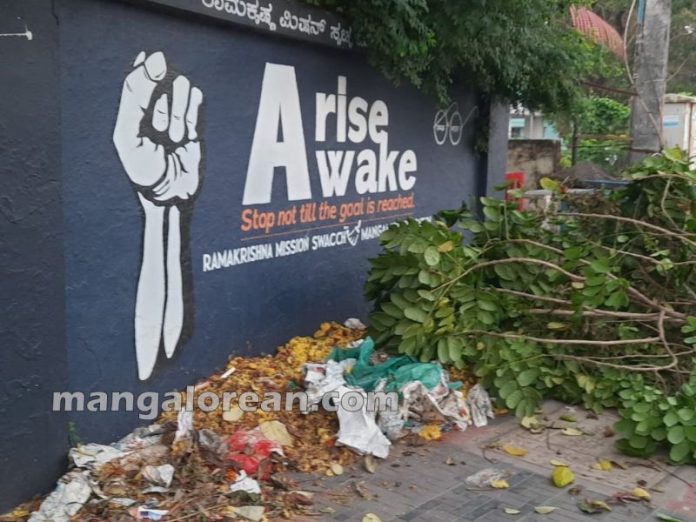 Mangaluru: While it is a good initiative undertaken by Mangala Foundation together with Ramakrishna Mission in painting the walls near University College & Clock Tower, it’s sad to note already the area in front and surroundings of the wall paintings have been littered by ignorant people, including alcoholic homeless people, who spend their time sitting on the footpath in front of this wall, and dirtying the area with used food and liquor wrappers, waste food, Gutka spit etc. Then we also have these out-of-town street vendors who after their flower sale or old clothes sale, leave behind a huge pile of garbage, which the poor Pourakarmikas have to slog to clear it. 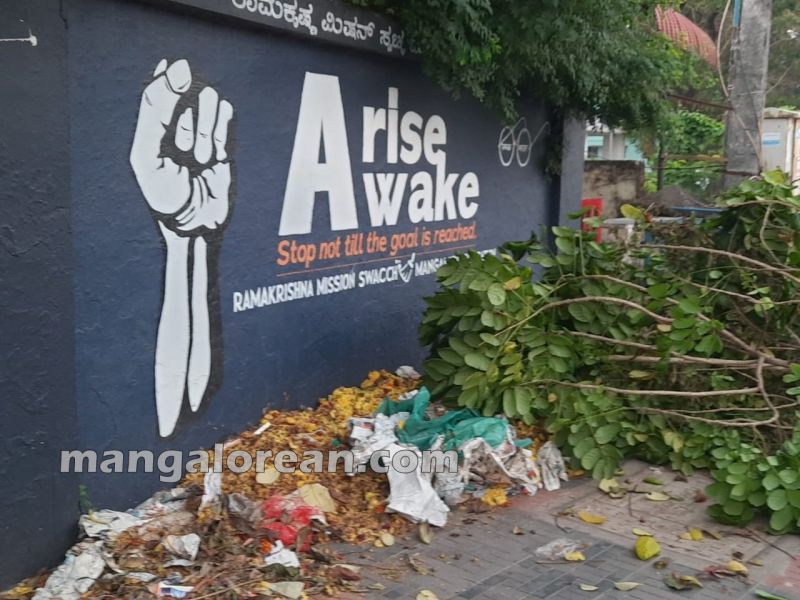 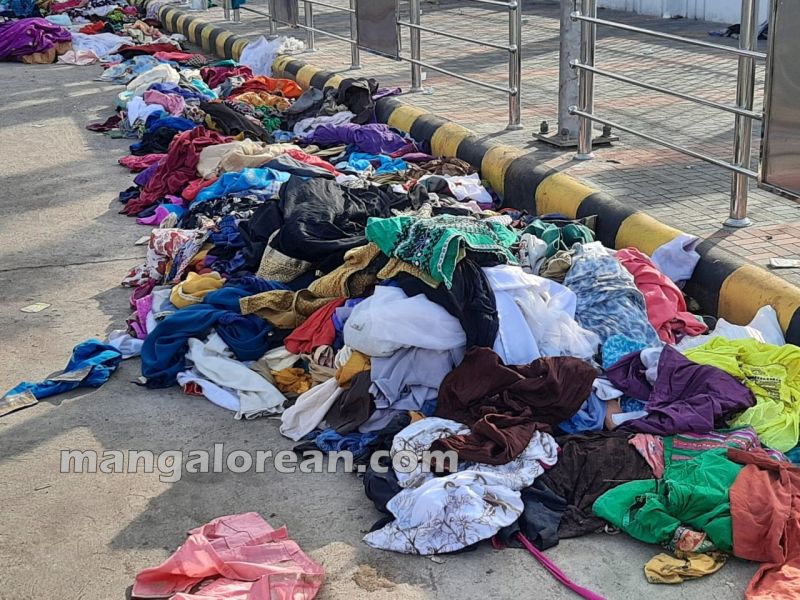 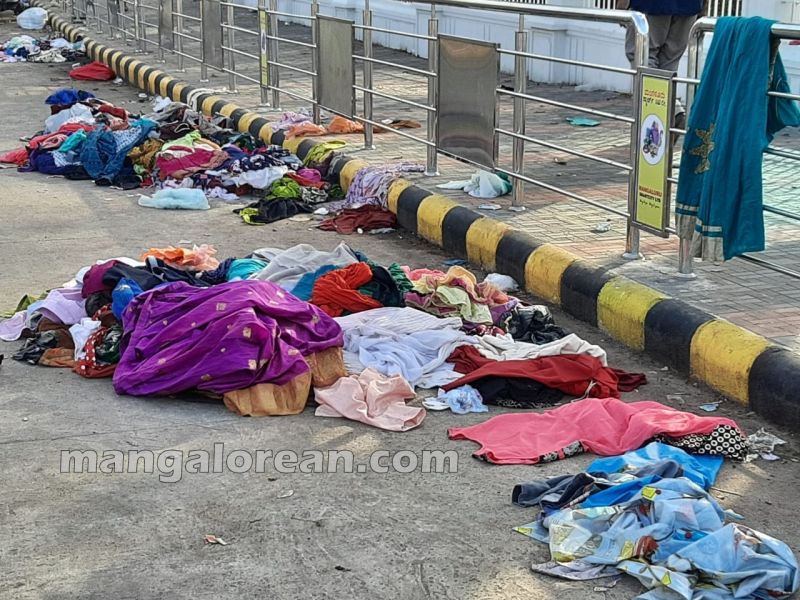 Look at the pictures in this report, which will give the right explanation. Most of the garbage in Mangaluru is that of street vendors, homeless people, night mobile canteens, etc- and the City officials have done nothing to stop it for years. Nothing but a shame that our City officials can’t tackle this issue. This has been a never-ending problem-When the vendors wind up for the day, they leave the garbage behind, spilling on the roads, inconveniencing the commuters and shopkeepers around the areas. The MCC officials have turned a blind eye towards the garbage created by these out-of-town street vendors.

And ever since the SMART officials of MANGALURU SMART CITY TLD (MSCL) constructed the new WIDER FOOTPATHS, they have been much used by street vendors, rather than used by pedestrians. We are already seeing illegal parking of vehicles and encroachment along footpaths by shopkeepers and street vendors that have choked the City, thereby causing huge inconveniences to the public. Many citizens are questioning what is the use of spending lakhs/crores on these senseless Wide Footpaths when most of it is used by street vendors, parking etc. Just look at these new wide footpaths being used by out-of-town street vendors who are making a brisk business selling flowers during various feasts, including the recent Deepavali festival, and the footpaths are trashed with garbage, after their sales. 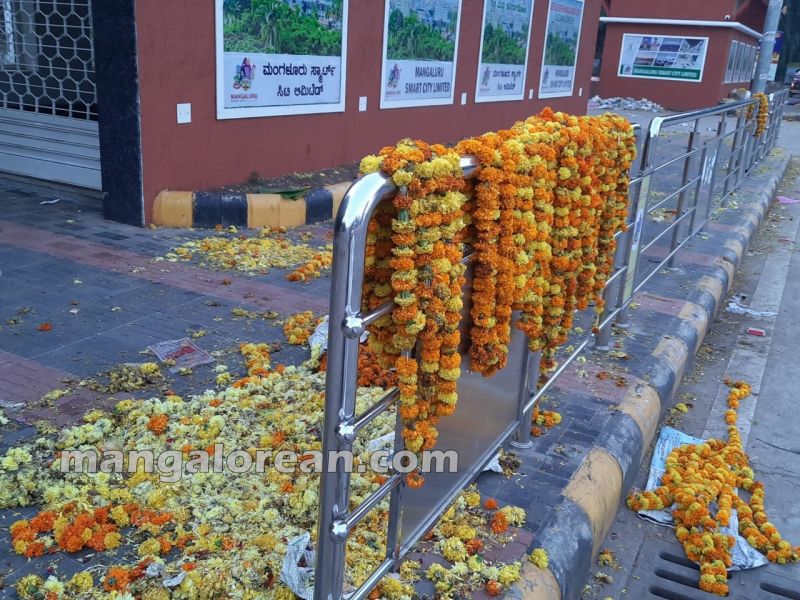 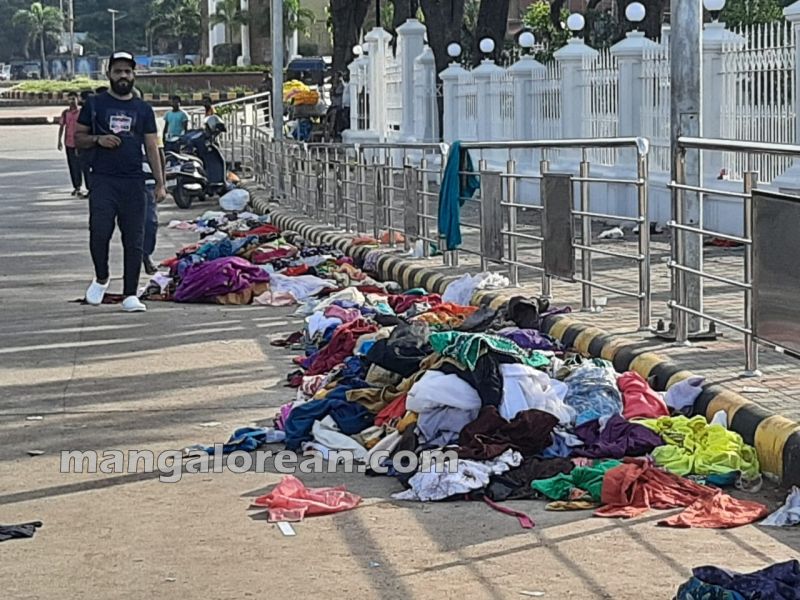 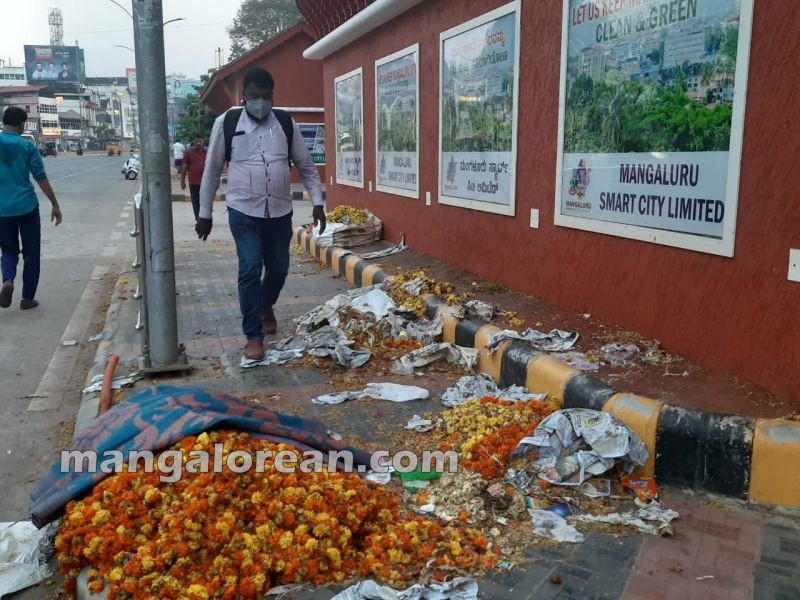 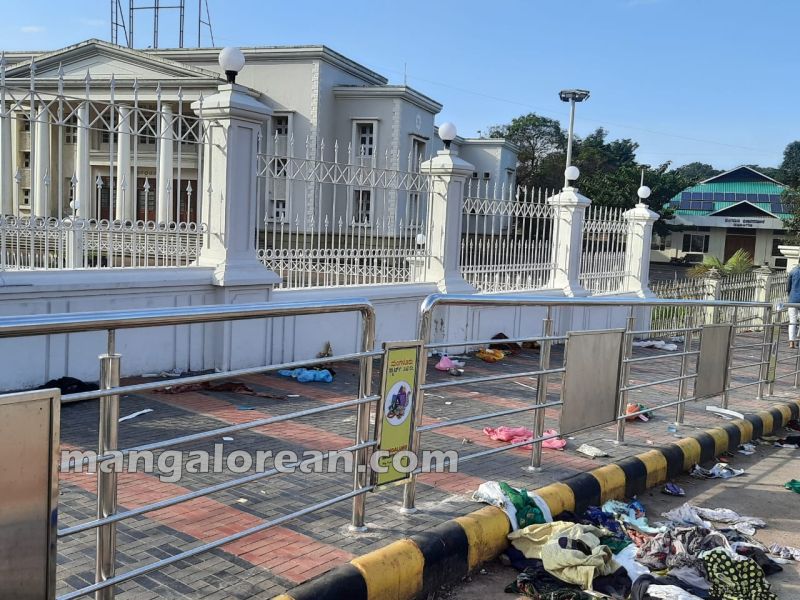 These vendors need to be warned and fined if they leave behind garbage after their business. When MCC officials slap a hefty fine on business owners for littering, how come they don’t slap fines on these street vendors, when they literally dirty the city? That is a double standard shown by our city officials. We need to have pity on these street vendors doing their business for their daily bread, but dirtying the area is ignorant on their part, which should be condemned, and serious action taken. Of our many civic problems, we view the problem of visible filth on our streets as a behaviour and an attitude problem that can be solved in our lifetime (or rather, this month). This can be achieved without spending money or changing legislation or systems. It requires coming up with smart ideas to change people’s rooted cultural behaviour and attitudes. And making sure those ideas work. And to make this happen we need public support in keeping the city clean, and we also need more volunteers.

But my question is, why do MCC employees/Pourakarmikas have to clean up the mess left behind by the street vendors? These street vendors are not even the citizens of Mangaluru. They don’t even pay City taxes. Then why is MCC not taking any action against these street vendors who leave behind a big mess that Pourakarmikas have to clean up? And this is not the FIRST time, it happens year after year, month after month, and the MCC officials have turned a blind eye towards it. Many times volunteers of Ramakrishna Mission and NGOs who strive hard for Mangaluru’s Swachata have advised these flower vendors to keep their areas clean and see that no garbage is left behind, but all in vain- the pictures in this report will speak the truth!

One local flower shop owner who does business near Town Hall, next to these out-of-town vendors said, “Look at the mess these people have left behind, and no city officials take action, while they are quick in giving warnings to us locals when we do something wrong. I clean the area when I am done with my sales, but not so with these people who make a mess and leave, and we get the blame. And they have support from some locals, who probably get paid illegally, which MCC may not know. This is not right when we pay taxes, rent, utility bills etc, and these non-citizens of Mangaluru don’t”.

Despite being the highest in literacy this city seems to have a lack of civic sense. Cleanliness reflects the mind. It’s not only the common people who litter, even educated and rich people are the worst at littering. For example, every night rich and educated people come in high-end cars to get their favourite Natural Ice Cream, located near Kadri Pumpwell on Kadri Road, and once they leave the place, the entire area is filled with garbage, either liquor bottles, snacks wrappers, Pizza boxes etc- and how do I know it? Because I live close by and I have written quite a bunch of articles about the ignorance of these rich people who litter. So how can Mangaluru be Swachh, when we have rich and educated people like these? 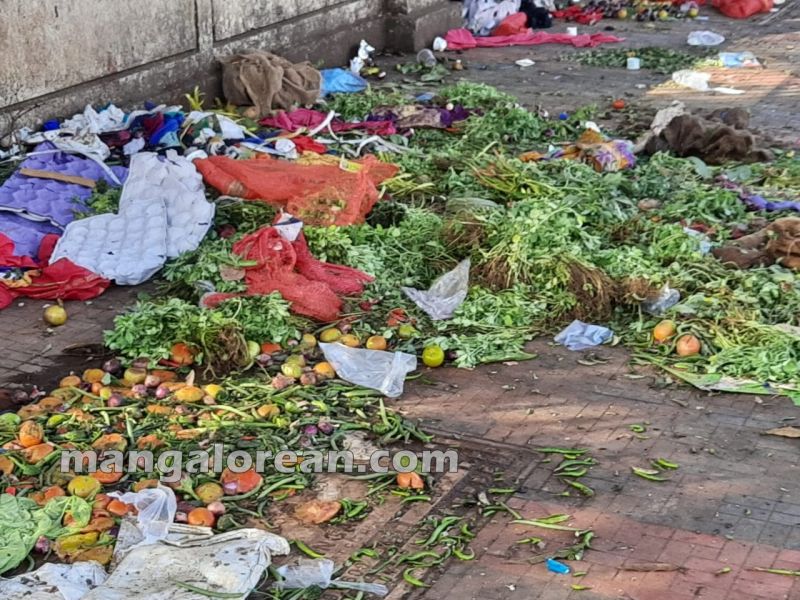 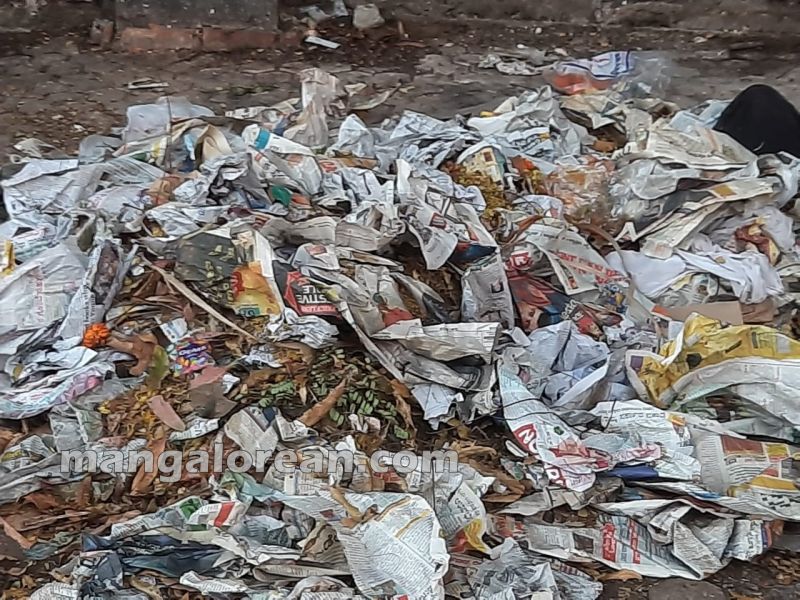 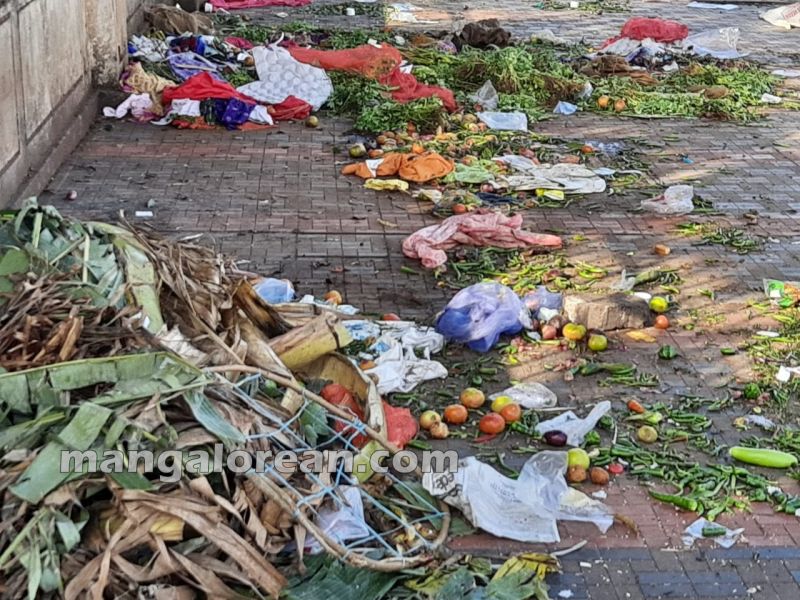 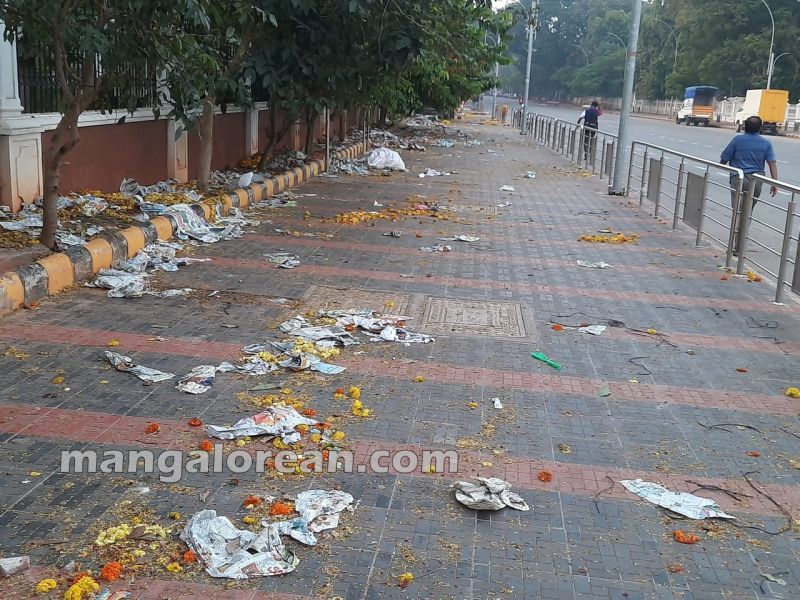 And how can Mangaluru reach the top level in the National Cleanliness survey, when Mangaloreans and street vendors are showing ignorance and abusing the Swachh Mangaluru campaign? Featured as one of the cleanest cities in India- our educational coastal town needs to improve. Stray animals scavenged on leftovers. It’s time that authorities start slapping fines if cleanliness is not maintained or if they catch someone littering in the public. What are our officials waiting for? Take action immediately, and see that Mangaluru improves in its cleanliness, and not just boast of the clean city status, this city is christened with.

Let’s work together and see that we keep our surroundings clean. Remember we should learn from our mistakes to change, and not continue our old habits. And let’s remember to make “Namma Mangaluru, Swachh Mangaluru!”. Let’s look forward to a better ranking of Mangaluru City in Cleanliness!