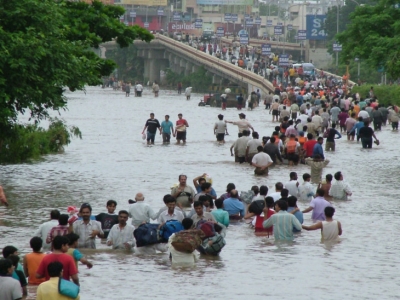 Being a coastal state with surface water scarcity, deserts and fast paced industrialisation, Gujarat is facing the brunt of climate change. The major risks for it in the coming years are temperature, precipitation extremes and a rise in the sea level.

Gandhinagar: Being a coastal state with surface water scarcity, deserts and fast paced industrialisation, Gujarat is facing the brunt of climate change. The major risks for it in the coming years are temperature, precipitation extremes and a rise in the sea level.

To address all these issues the state government is working on multi-level plans that will reduce carbon footprint in the state, conserve water, increase social forestry and renewable energy production, said sources in the climate change department.

An officer from the department said on condition of anonymity that Gujarat would be the first state with a climate change department and will start working on mitigation.

The major impact of climate change is feared in rainfall variation which is likely to threaten productivity, because 54 percent of the cultivated land is dependent on the rains and more than 60% of the total land area falls in the drought prone areas. There is a consistent decline in the availability and quality of groundwater for irrigation.

It has 1600 kilometres of the longest sea coast in the country, covering around 40 talukas, which are at risk of getting exposed to the impact of sea level rise, salinity ingress, and cyclonic events. This creates an apprehension of people’s migration from the coastal belt.

The state’s urban area is increasing at 35% rate which is also creating challenges like reducing the green space or forest area, which will increase the climate change impact. In the last one decade major cities in the state have witnessed 4-5 floods. Surat has experienced 23 floods in the last 100 years.

To address the water resources issue, the government is planning to move from flood irrigation to drip or sprinkler irrigation, change the crop patterns and promote village water committees for water conservation. The state is also planning to launch incentive schemes for groundwater recharging. To control the salinity ingress, the government plans to increase the number of desalination plants and wastewater treatment.

Another fear is that climate change could increase vector borne diseases and create public health issues because the rising mercury will lead to heat waves in the state.

GreenHouse gas emission in Gujarat in 2005 was 166.2 million tons (MT). According to initial estimates for 2018 it has increased to 245 MT. To address the issue the government is moving fast on replacement of traditional power generation systems by renewable energy, be it wind power, solar power through large solar parks, encouraging rooftop solar panels and installing solar panels on canals, said the officer.

To check increasing private vehicles which add to carbon emission, the state government is slowly but steadily moving towards mass transport, first introducing city bus services, then adding BRTS and now metro rail. The first phase of the metrolink commenced in Ahmedabad, in Surat it is under construction, and soon Ahmedabad-Gandhinagar will be connected by metro.

The state government has launched a subsidy scheme to promote the sale and usage of electric vehicles, and the transport corporation is planning to buy 1500 electric buses.