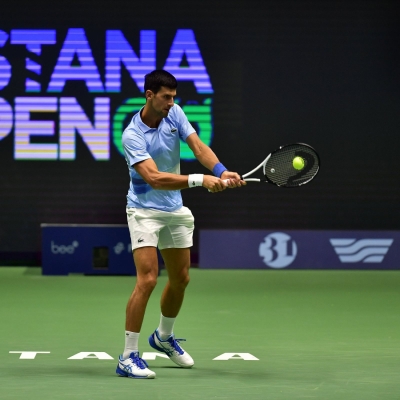 Astana (Kazakhstan): World No.7 Novak Djokovic advanced to the final of the Astana Open after Daniil Medvedev retired from the pair’s semifinal clash at the end of a dramatic second-set tie-break due to a leg injury, here on Saturday.

Medvedev’s retirement came moments after Djokovic had clinched a dramatic tie-break to level the match at 4-6, 7-6(6). It was an unfortunate end to what was shaping up to be one of the matches of the year on the ATP Tour, with both players bringing a high level to their 11th ATP head-to-head meeting.

“I really hope that his injury is nothing too serious. I know Daniil, he’s a great guy, he’s a fighter, he’s a big competitor. He wouldn’t retire from a match if he didn’t feel that he [could] continue or [if it wouldn’t] worsen his injury. He told me that he pulled an adductor muscle in his leg,” said Djokovic.

“It was such a close match, particularly in the second set. I would probably say he was a better player on the court in both sets. I was fighting and trying to find a way. I found a way to win the second, but I’m just sad for the tournament and for these people who were enjoying the battle, and for Daniil that it had to end this way,” he added.

Djokovic will now aim to seal back-to-back titles in Sunday’s final against Stefanos Tsitsipas, who was a 4-6, 6-4, 6-3 winner against Andrey Rublev. The Serbian, who lifted his 89th tour-level crown in Tel Aviv last week, leads Tsitsipas 7-2 in their ATP head-to-head series.

Incredibly, this was Djokovic and Medvedev’s first meeting of 2022 — and only the second event where they were in the same draw, after Roland Garros. It was also Djokovic’s first match against a Top 10 player on a hard court since the 2021 ATP Finals, where he fell to Alexander Zverev in the semifinals. On the other hand, Medvedev was seeking his first indoor hard-court final since that same event.

The battle between the second and fourth seeds was a master class in geometry, as the two players artfully carved a dizzying array of intricate, intuitive shots.

There were, improbably, three consecutive breaks of serve in the first set, two of them belonging to Medvedev, who converted his only two break opportunities. Serving at 5-4 he raced out to 40/0 and took the set on his second opportunity.

There were no breaks of serve in the second set and so it came down to a tie-break. Medvedev won the first point, then Djokovic employed the drop shot on four consecutive points — and won them all. Ultimately, he won the tie-break on yet another drop shot when Medvedev’s forehand lob sailed long.

By winning Wimbledon in July, Djokovic is guaranteed to qualify for the ATP Finals as a current-year Grand Slam champion who finishes within the Top 20 of the ATP Race To Turin should he win the Astana Open.

Victory at the ATP 500 would give Djokovic enough points to guarantee that he will be in the Top 20 of the Race on the Monday after the Paris Masters.